MONTREAL -- War Machine made his first trip to Quebec a memorable one, leaving the Cepsum Amphitheatre with a big win over the previously unbeaten Guillaume "El Toro" Delorenzi in the main event at XMMA 7 “Inferno” on Friday.

A replacement for Phil Baroni on two weeks’ notice, the fighter formerly known as Jon Koppenhaver took the fight to the ground, where the welterweights battled back and forth. For every War Machine takedown, de Lorenzi had the answer, often reversing the controversial UFC veteran. With a little less than a minute remaining in the round, War Machine secured the rear mount though, and feverously worked in a rear-naked choke, giving de Lorenzi no choice but to concede.

Todd Gouwenberg was looking to make a statement in his title fight with XMMA light heavyweight champion Martin Desilets, and despite a brilliant start, he let emotions get the best of him and fell right into a modified triangle choke at 1:47 of the first round. While the hold itself was not tight enough to elicit the tapout, Desilets battered and bruised Gouwenberg’s head and rib cage until he succumbed to the punishment.

‘Ragin’ Kajan Johnson played spoiler to local hero Steve Claveau in his first lightweight title defense with a second-round armbar victory. Their previous meeting ended in an unsatisfying draw, but this time champion Johnson took it to Claveau throughout the fight, controlling the Victoriaville fighter’s back for the majority of the first round.

The second round provided more of the same, as Johnson took the fight back to the mat where he grabbed hold of a fight-ending armbar at 3:02.

Douglas Evans took the fight to Thierry Quenneville, but submitted to a triangle choke at 1:48 of the second round. From the sound of the bell, Evans blasted the Frenchman with punches and a head kick that resonated throughout the arena. Quenneville was forced to spend the majority of the first defending against the offensive onslaught, but later reversed and finished the round in top position. 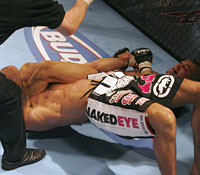 Al Quintero/Sherdog.com
K. Johnson submitted
S. Claveau with an armbar.
Quenneville came out flying to start the second round, stunning Evans and eventually dropping him with a right. Evans instinctively put Quenneville on his back, but couldn’t fend off the triangle.

Dan Grandmaison stunned Markhaile Wedderburn early on, dropping the muay Thai stylist with a three-punch combination that led to the 1:25 finish.

Grandmaison went for broke, rushing Wedderburn and taking his back to rain down punches. Wedderburn, in an attempt to shake his foe, tweaked his knee, and tapped immediately while Grandmaison continued to hammer away.

Derek Gauthier submitted Dave Pariseau with a triangle choke at 2:57 in the first round. In the opening moments of their welterweight contest, Derek Gauthier caught the leg of Pariseau and delivered three hard kicks, the third cutting the feet out from under Pariseau. Gauthier pounced on the Team Legion fighter, taking his back briefly before getting swept. Unfortunately for Pariseau, the sweep landed him deep in a Gauthier triangle.

Tim Wadsworth took the first solid punch Johan Croes hit him with and promptly put the fight on the mat where he held a definite advantage. Wadsworth controlled Croes, transitioning to the mount where he used punches to set up the armbar finish at 3:12 of the opening round.

From the moment they hit the mat, Eddie Fyvie had Stephane Lamarche defending a myriad of submissions throughout the duration. He finally caught the Ottawa native with a modified armbar at 2:18 of the third round.

William Romero showed he had more than enough gas in the tank in his featherweight bout against Mitch Gagnon as he gutted out a hard-earned unanimous decision (29-28, 28-27, 29-28). Despite losing the first round on all scorecards, Romero bounced back by grounding his foe in the second and demonstrated the cleaner, more effective striking in the third set.

Valerie Letourneau utilized crisp striking to keep Kate Roy off balance before landing a beautiful takedown. Roy had no answer for the Letourneau’s ground-and-pound, offering up her right arm for the taking. The Quebec native obliged, slapping on an armbar to seal the win at 3:23 of the first round.

Daylin Logan came out swinging, literally, tagging Dominic Poissant at will before pushing him to the cage and swiftly taking him down. Logan wasted little time putting on the finishing touches by pounding out a dominant TKO win just 54 seconds into the first round.

After a cautious opening frame, and a couple of inadvertent groin shots, John Makdesi and Amir Uddin stepped up the pace on their feet. Midway through the second, Uddin gestured to referee Jerry Bolen and pointed to his left eye. Makdesi replied with a kick to the body that dropped Uddin. While grounded, Uddin continued his protest, only to be met by a right-left combination that prompted the referee stoppage at 3:06.

Jeff Royer took advantage of an early takedown on Sebastian Deroy in the evening’s opening bout, quickly moving to mount where he coaxed out a referee’s stoppage at 2:43 into the first round.