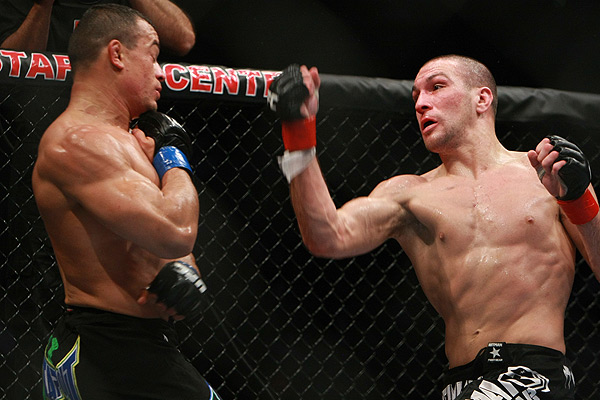 
Bellator MMA could not have chosen two more different fighters for its latest headliner.

Three-time Ultimate Fighting Championship “Fight of the Night” bonus winner Josh Neer will take on Paul Bradley in the Bellator 129 main event on Friday at the Mid-America Center in Council Bluffs, Iowa. While the welterweight clash likely carries little weight in terms of significance at 170 pounds, it brings with it the customary intrigue of a striker-versus-grinder matchup.

Neer will enter the cage on the strength of a three-fight winning streak, as he returns to Bellator for the first time since his technical submission loss to Eddie Alvarez in May 2010. “The Dentist” last competed at a Victory Fighting Championship event in August, when he needed just 67 seconds to submit Travis Coyle with a first-round armbar. Neer, 31, has secured 32 of his 36 career victories by knockout, technical knockout or submission, and only one of his previous 15 bouts has gone the distance.

Bradley, meanwhile, was a four-time letter winner and two-time NCAA All-American wrestler at the University of Iowa. A former Ring of Combat champion, the Alliance MMA export last fought at Bellator 112 in March, when he wound up on the wrong side of a unanimous decision against Nathan Coy. The 31-year-old has been finished only once -- by former Strikeforce champion Luke Rockhold -- in 28 professional outings. Bradley made two failed appearances inside the UFC’s Octagon in 2011, losing to Rafael Natal and Mike Pierce.

With Neer-Bradley on the marquee, here is what to watch for at Bellator 129:


Houston Alexander seems intent on squeezing every last ounce of juice out of his career.

The 42-year-old Nebraskan will seek his fourth win in five fights when he faces Virgil Zwicker -- a short-notice replacement for the injured James Thompson -- at a 215-pound catchweight in the co-main event. Known for an aggressive striking style and vulnerability to wrestlers and grapplers, Alexander sports 38, 48-, 56-, 61- and 61-second finishes among his 16 wins. A blowout victory against Keith Jardine at UFC 71 in May 2007 remains the signature piece on his resume.

Zwicker finds himself on the rebound following his 62-second submission defeat to Linton Vassell at Bellator 122 in June. The Team Quest representative has never lost back-to-back bouts. 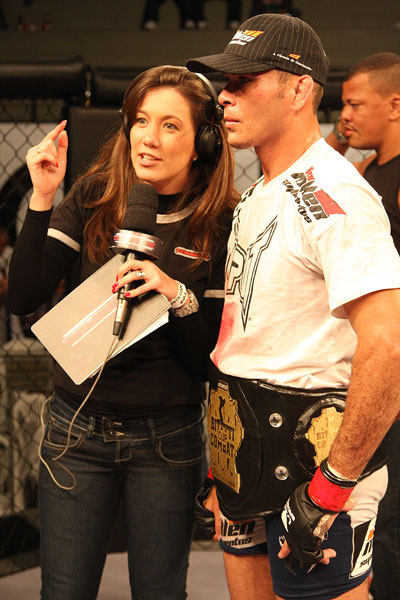 Photo: Marcelo Alonso/Sherdog.com
Santos has won 11 of 14.
Andre Santos is an anaconda choke waiting to happen.

Santos rides into his Bellator debut against Strikeforce veteran James Terry on a run of five consecutive victories. The Brazilian has executed 22 submissions since arriving in MMA in December 2006, a staggering 15 of them via anaconda choke. “Chatuba” has not competed since he knocked out Ramil Mustapayev with second-round punches under the Fight Nights banner in Moscow a little less than a year ago.

Terry, a protégé of former Strikeforce middleweight champion Cung Le, has won three of his last four fights. The 33-year-old made his first Bellator appearance in April, when he lost a split decision to Rick Reeves at the Reno Events Center in Reno, Nev.


Women are back in Bellator’s plans for the first time in nearly two years, as the unbeaten Jozette Cotton welcomes former pro boxer Holly Lawson to the MMA world.

Not since Holly Holm put away Katie Merrill with second-round punches at Bellator 91 has the organization staged a female fight.

Cotton, 26, has finished three of her four fights, pairing violent standup with capable wrestling. The 26-year-old has not fought since earning a unanimous decision against Jessica Halverson at a Dynasty Combat Sports show in January. Cotton’s four opponents -- Halverson, Elshaddai Cleffman, Nikita Netjes and Kate Bloomfield -- own a cumulative 9-14 record.

Lawson compiled a 5-2 mark as a pro boxer. The California-based Canadian reportedly left boxing behind because of the lack of opportunity present for female fighters.


Davin Clark gets his chance on center stage.

The American Kickboxing Academy product will dip his toe in Bellator waters for the first time, when he meets the resurgent Joe Vedepo in a middleweight showcase. A stablemate of UFC heavyweight champion Cain Velasquez and the undefeated Daniel Cormier, Clark has trained extensively with some of MMA’s best and brightest. The 32-year-old will carry a two-fight winning streak into his match with Vedepo, though he has not fought since June 2012.

Vedepo has gone 8-5 since an unsuccessful two-fight stint in the UFC. “The Doctor” last appeared at Bellator 121 in June, when he picked up a majority decision over Cortez Coleman.