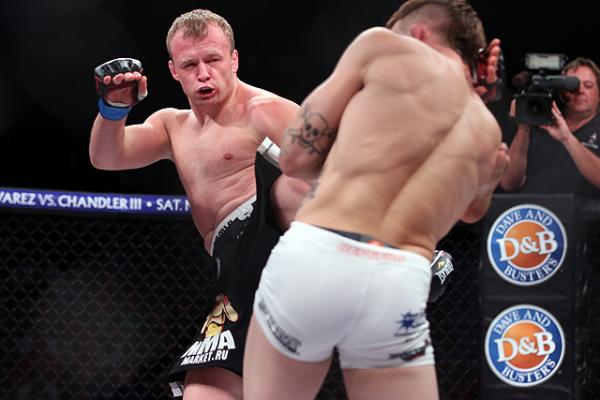 Alexander Shlemenko is 14-2 in his last 16 outings. | Photo: Keith Mills/Sherdog.com


Fireworks are a given.

Former Bellator MMA middleweight champion Alexander Shlemenko will lock horns with Dutch knockout artist Melvin Manhoef in the Bellator 133 main event on Friday at the Save Mart Center in Fresno, Calif. No one expects the encounter to go the full 15 minutes.

Shlemenko has won 14 of his last 16 bouts. The 30-year-old Russian striker last competed under the Fight Nights banner in December, when he halted a two-fight losing streak and took a three-round unanimous decision from Yasubey Enomoto in Moscow. Shlemenko has secured 37 of his 51 career victories by knockout, technical knockout or submission. His list of victims includes former World Extreme Cagefighting champion Doug Marshall, “The Ultimate Fighter” Season 17 quarterfinalist Bubba McDaniel and 2009 Dream Super Hulk grand prix winner Ikuhisa Minowa. Shelemenko has compiled an 11-3 record inside Bellator, losing only to Tito Ortiz, Hector Lombard and Brandon Halsey.

Though Manhoef has seen his better days, he remains one of MMA’s most feared standup fighters. The 38-year-old former Cage Rage champion has delivered 27 of his 29 professional wins by knockout or technical knockout and has finished eight different opponents in a minute or lass. A Mike Passenier protégé, Manhoef last appeared at Bellator 131 in November, when he was victimized by second-round punches from Joe Schilling at the Valley View Casino Center in San Diego. Victories over 2001 K-1 World Grand Prix winner Mark Hunt, Japanese legend Kazushi Sakuraba and 2006 Pride Fighting Championships welterweight grand prix winner Kazuo Misaki anchor his resume.

With the Shlemenko-Manhoef headliner as the primary drawing card, here is what to watch for at Bellator 133:


Pat Curran wants to regain that which was once his.

In his first appearance since relinquishing the Bellator featherweight championship, Curran will tangle with onetime M-1 Global titleholder Daniel Weichel in the co-main event. The winner figures to have a claim as a potential No. 1 contender at 145 pounds.

Curran has lost two of his last three bouts, sandwiching five-round decision losses around a rear-naked choke submission on rival Daniel Straus. The 27-year-old Jeff Curran disciple last fought at Bellator 123 in September, when he surrendered the featherweight crown to Patricio Freire at the Mohegan Sun Arena in Uncasville, Conn. A dangerous counterstriker with a polished an opportunistic submission game, Curran has authored some of Bellator’s most memorable finishes, from his vicious knockout against Joe Warren to his Peruvian necktie-induced tapout on Luis Palomino.

Weichel, meanwhile, has 42 fights of experience under his belt. The 30-year-old German grappler will carry a six-fight winning streak into the cage, as he touches down for the first time since he submitted Desmond Green with a second-round rear-naked choke at Bellator 119 in May. Weichel sports 21 submissions among his 34 career victories.

Photo Courtesy: Bellator MMA
Honeycutt has potential.
Bellator has a potential gem on its hands with Chris Honeycutt.

The unbeaten Dethrone Base Camp prospect will put his unblemished record on the line when he faces Clayton MacFarlane in a welterweight showcase. Honeycutt was a two-time NCAA All-American wrestler and 2012 NCAA finalist at Edinboro University in Edinboro, Pa., where he ranks sixth on the school’s all-time list in winning percentage (.855) and seventh in career wins (130), two ahead of Josh Koscheck. The 26-year-old North Ridgeville, Ohio, native last competed at Bellator 125 in September, when he stopped “The Ultimate Fighter” Season 12 graduate Aaron Wilkinson on second-round punches.

An undefeated Team Xplode MMA export, MacFarlane has finished his last three opponents inside one round. He was an NCAA wrestling champion at Lindenwood University, a Division II school in St. Charles, Mo.


In Julia Budd, Bellator has a piece around which to build its women’s featherweight division.

Budd will return to the cage for the first time in more than a year when she battles the once-beaten Gabrielle Holloway as part of the main card. The 31-year-old Canadian muay Thai practitioner has rattled off four consecutive wins since succumbing to a first-round armbar from Ronda Rousey at a Strikeforce Challengers show in 2011. Budd last fought at Invicta Fighting Championships 7 in December 2013, when she defeated Charmaine Tweet by unanimous decision.

A replacement for the injured Talita Nogueira, Holloway on Jan. 24 rebounded from her first professional setback, as she scored a third-round technical knockout against Lacie Jackson at a Raxx Ultimate Fighting event in Port Allen, La.


Art Arciniega is graduating from the regional scene.

The former Tachi Palace Fights featherweight champion will test major MMA waters for the first time, as he collides with Charley Huston on the undercard. Arciniega has pieced together a seven-fight winning streak since bowing to a still-green Chad Mendes a little less than five years ago. However, the 33-year-old Californian has not competed since he captured the Tachi Palace Fights title in a split decision over Marcello Cassero in 2013.

Huston, 26, has spent his entire eight-fight career inside the Gladiator Challenge, King of the Cage and West Coast Fighting Championship organizations.