Following in EliteXC’s failed 2008 footsteps, Bellator MMA has decided to hitch its wagon to Ken Shamrock and Kimbo Slice.

Shamrock will meet Ferguson in the Bellator 138 main event on Friday at the Scottrade Center in St. Louis, as the 51-year-old Ultimate Fighting Championship hall of famer returns to the cage for the first time in nearly five years. The two heavyweights were originally booked to face one another at EliteXC “Heat” on Oct. 4, 2008. However, Shamrock suffered a cut the day of the fight, leaving Seth Petruzelli to fill in as a last-minute replacement. The pink-haired American karateka disposed of Ferguson in 14 seconds, and the entire EliteXC promotion came crashing down soon after.

One of the sport’s true pioneers, Shamrock will enter the match having lost seven of his past nine bouts. “The World’s Most Dangerous Man” last competed at a King of the Cage event in November 2010, when he succumbed to first-round punches from journeyman Mike Bourke. A former King of Pancrase and UFC superfight champion, Shamrock has delivered 23 of his 28 career wins by submission, and most believe he will need to take that route to tame Ferguson.

Still best known for his boatyard brawls that made the rounds on YouTube, Ferguson appeared on Season 10 of “The Ultimate Fighter” reality series once EliteXC folded. He last appeared at UFC 113 in May 2010, when he was on the receiving end of a second-round technical knockout from Matt Mitrione. The 41-year-old Bahamian-born Ferguson went on to dabble in professional boxing, compiling a perfect 7-0 record with six knockouts.

With the Shamrock-“Kimbo Slice” clash on the marquee, here is what to watch for at Bellator 138: 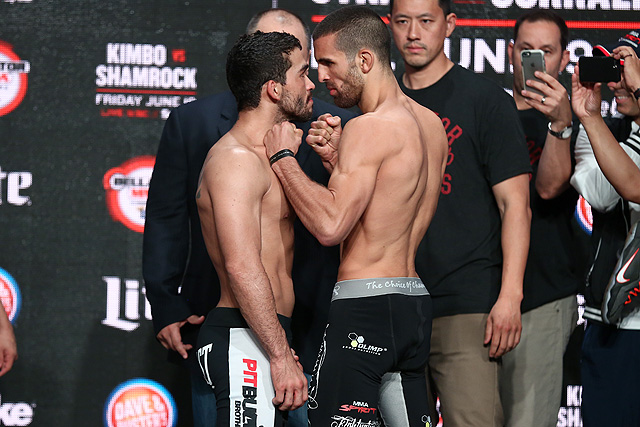 (+ Enlarge) | Photo: Dave Mandel/Sherdog.com
“Pitbull” has been the real deal.
Viewed by many as the top featherweight operating outside of the UFC, Patricio Freire does not receive the widespread recognition he deserves.

The Brazilian “Pitbull” will put his six-fight winning streak and 145-pound championship on the line against the surging Daniel Weichel in the co-main event. Freire captured the Bellator featherweight crown with a five-round unanimous decision over Pat Curran in September and then successfully defended it with a fourth-round rear-naked choke on Daniel Straus four months later. The 27-year-old has secured 17 of his 23 professional victories by knockout, technical knockout or submission.

Weichel, 30, will carry a seven-fight winning streak into the cage. The Team MMA Spirit representative last fought at Bellator 133 on Feb. 13, when he took a split decision from the aforementioned Curran. A former M-1 Global champion, Weichel owns a 4-0 mark since arriving in Bellator in 2014. 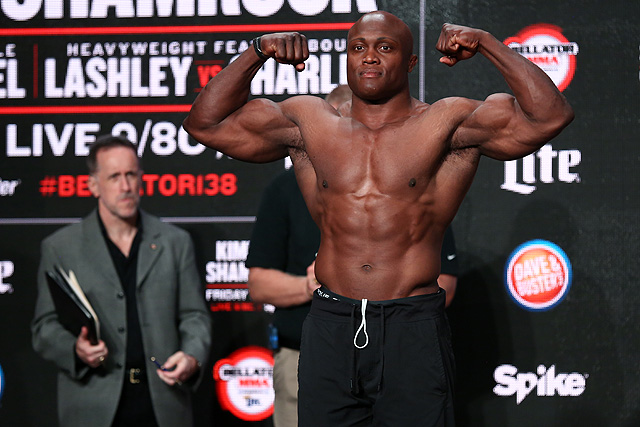 (+ Enlarge) | Photo: D. Mandel/Sherdog.com
Lashley is on a roll.
Bobby Lashley hoped to avenge one of his two career losses. An injury wrecked those plans.

Lashley will settle for a slot opposite Dan Charles in a heavyweight showcase. The soon-to-be 39-year-old has recorded five straight wins since his decision loss to Pride Fighting Championships veteran James Thompson in May 2010, and he has started his run in Bellator with back-to-back finishes against Josh Burns and Karl Etherington. Lashley wrestled collegiately at Missouri Valley College in Marshall, Mo., where he was a four-time NAIA All-American and three-time national champion. He has made the rounds on the professional wrestling circuit, where he has worked for World Wrestling Entertainment, Extreme Championship Wrestling and Total Nonstop Action.

A replacement for the injured Thompson, the 29-year-old Charles will step into the spotlight on the strength of consecutive victories over James Wilson and Stuart Austin.

BACK IN THE SADDLE 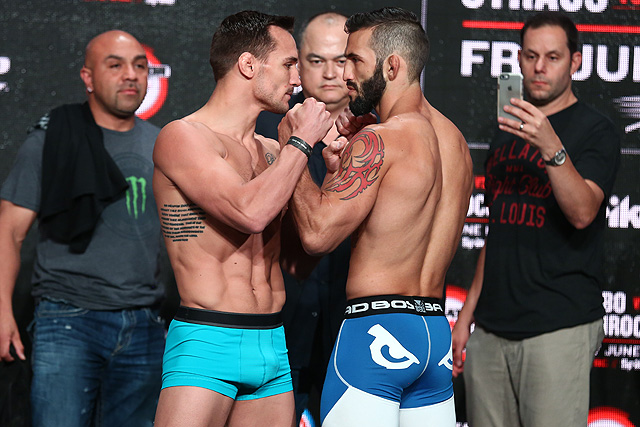 (+ Enlarge) | Photo: D. Mandel/Sherdog.com
Can Chandler recapture the magic?
Michael Chandler was the centerpiece of the Bellator not all that long ago, but a three-fight losing streak -- and the damage he has absorbed in those losses -- has his supporters on edge.

The former lightweight champion will begin his latest climb on the 155-pound ladder against Derek Campos. Chandler has not competed since he wilted in the face of fourth-round punches in his rematch with American Top Team’s Will Brooks at Bellator 131 on Nov. 15. It marked the first time the 29-year-old Alliance MMA rep had been finished as a pro. Chandler was an NCAA All-American wrestler at the University of Missouri, where he teamed with reigning One Championship titleholder Ben Askren.

Campos, a former King of the Cage champion, has rattled off six wins over his last seven appearances, bowing only to Patricky Freire. 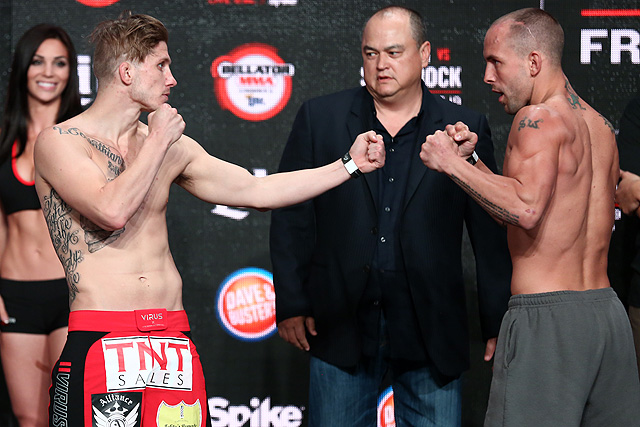 Lawrence will make his first appearance under the Bellator banner on the undercard, as he confronts the well-traveled Sean Wilson in a preliminary featherweight affair. The 25-year-old Pacific, Mo., native competed on Season 15 of “The Ultimate Fighter” and enjoyed a three-fight tour in the UFC, going 1-2 before being released. Lawrence has won three fights in a row, including a first-round technical knockout against the previously unbeaten Sam Toomer at RFA 25 in April.

Wilson, a 69-fight veteran, has competed inside the M-1 Global, King of the Cage, Titan Fighting Championship and Extreme Challenge organizations. He is just 2-8 across his past 10 outings.