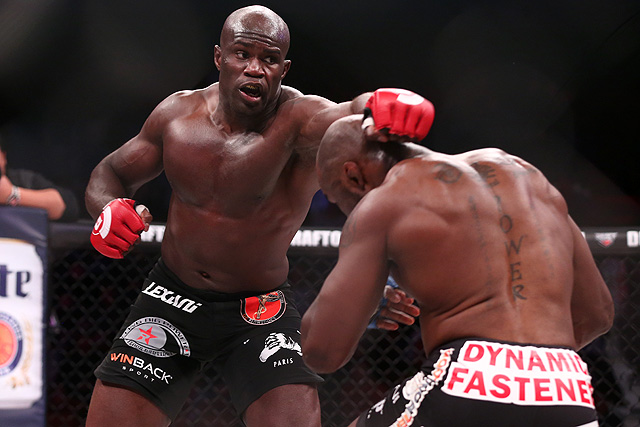 Cheick Kongo has not lost two fights in a row since 2009. | Photo: Dave Mandel/Sherdog.com


Bellator MMA heavyweight champion Vitaly Minakov has not fought in more than a year, so the division could use a little zest. Cue Cheick Kongo and Alexander Volkov.

Kongo and Volkov will lock horns in the Bellator 139 main event on Friday at the Kansas Star Arena in Mulvane, Kan., as they look to provide some clarity to one of the promotion’s more underutilized weight classes. Former World Wrestling Entertainment star Bobby Lashley, who delivered a second-round technical knockout against Dan Charles at Bellator 138, has already hinted at an interest in facing the winner.

Sand in the Kongo hourglass has begun to grow thin. Now 40, the French kickboxer last appeared at Bellator 134 in February, when he wound up on the wrong side of a split decision against former Strikeforce champion Muhammed Lawal. He has compiled a 4-2 record since the Ultimate Fighting Championship severed ties with him and left him to set up shop in Bellator, losing only to Lawal and the aforementioned Minakov. Kongo has delivered 16 of his 22 career victories by knockout, technical knockout or submission, often pairing a mechanical but effective standup attack with underrated takedowns and damaging ground-and-pound.

Volkov, meanwhile, has gone 5-1 since surrendering the Bellator title to Minakov in November 2013. The 26-year-old Russian last competed at Bellator 136 on April 10, when he yielded a split decision to American Kickboxing Academy export Tony Johnson at the Bren Events Center in Irvine, Calif. The 6-foot-7 Volkov sports 14 first-round finishes among his 24 professional wins. He has never suffered back-to-back losses.

With the Kongo-Volkov showdown as the centerpiece, here is what to watch for at Bellator 139:


Pat Curran currently finds himself in an unfamiliar position, on the outside looking in at 145 pounds.

The former Bellator featherweight champion will look to right his ship and snap a two-fight losing streak in a showcase matchup with Emmanuel Sanchez. Curran has not fought since Bellator 133 in February, when he dropped a split decision to onetime M-1 Global titleholder Daniel Weichel. That setback came on the heels of a unanimous decision defeat to Patricio Freire which cost him the 145-pound championship five months earlier. One of the most successful fighters in Bellator history, Curran has authored some of the organization’s most memorable finishes, from his Peruvian necktie on Luis Palomino to his violent knockout against Joe Warren.

Roufusport’s Sanchez will enter the cage on the strength of a six-fight winning streak. The 24-year-old last appeared at Bellator 135 on March 27, when he captured a unanimous verdict from Alejandro Villalobos at the Winstar World Casino and Resort in Oklahoma.

LEAVING THEM IN STITCHES 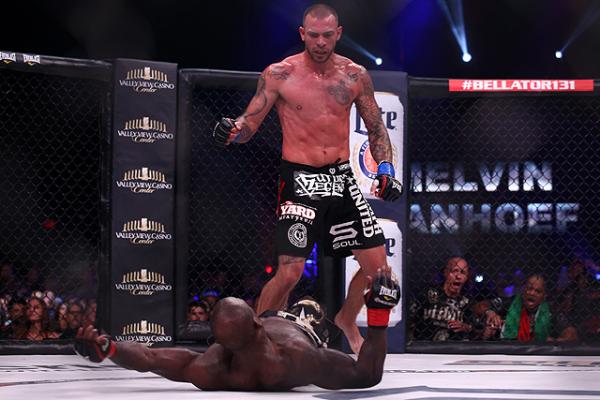 (+ Enlarge) | Photo: D. Mandel/Sherdog.com,
Schilling brings the heat.
One performance made Joe Schilling a must-see attraction in the Bellator cage.

An acclaimed kickboxer and accomplished muay Thai practitioner, the 31-year-old Dayton, Ohio, native executed one of MMA’s most unforgettable knockouts in 2014, when he felled Dutch destroyer Melvin Manhoef with punches in the second round of their firefight. However, Schilling failed to capitalize on his newfound momentum in April, as he came up short in a split decision defeat to Rafael Carvalho at Bellator 136. His latest assignment comes against Japanese export Hisaki Kato.

Kato has spent his entire five-fight career inside the Heat organization, and none of those five fights have reached the judges. The 32-year-old finds himself on the rebound following a first-round technical knockout loss to Henrique Shigemoto on March 22.

NOSE TO THE GRIND


Twice poised for breakthrough performances, Bubba Jenkins has twice lost his grip while attempting to climb the Bellator ladder.

Jenkins will resume his pursuits at 145 pounds when he takes on the well-traveled Joe Wilk and tries to bounce back from a disappointing submission loss to former World Series of Fighting champion Georgi Karakhanyan at Bellator 132 in January. A two-time NCAA All-American wrestler, Jenkins won a national championship at Arizona State University in 2011 and had combat-sports fans buzzing when he announced his planned transition to MMA. Since debuting roughly three and a half years ago, his two four-fight winning streaks have been offset by losses to Karakhanyan and LaRue Burley.

Wilk, a 33-year-old journeyman, has lost four of his past five bouts. “The Nose” has gone the distance only once in his 28-fight career.


John Alessio has not lost the drive to compete.

With more than 50 pro bouts under his belt, “The Natural” will get back to work against Bellator Season 8 lightweight tournament winner David Rickels in a featured clash at 155 pounds. Alessio has not competed since he claimed a three-round decision from Eric Wisely at Bellator 119 in May 2014; it was his first victory in more than two years. Alessio has held championships in the King of the Cage and Tachi Palace Fights organizations and fought for titles in the UFC and World Extreme Cagefighting. He owns 25 finishes among his 35 career victories.

Rickels has alternated wins and losses across his past four appearances. “The Caveman” last fought at Bellator 130 on Oct. 24, when he earned a unanimous verdict over Davi Ramos.