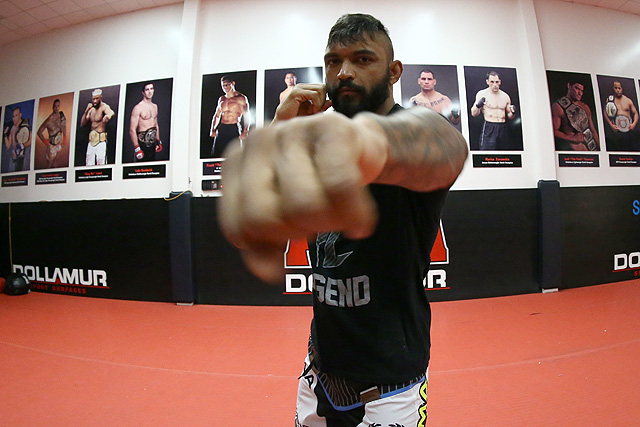 
The thought of Tito Ortiz winning another major mixed martial arts championship was thought to have died at the hands of Chuck Liddell at UFC 66 nearly nine years ago. Yet here he stands on the precipice of just such an accomplishment.

“The Huntington Beach Bad Boy” will challenge Liam McGeary for the Bellator MMA light heavyweight championship in the Bellator 142 “Dynamite” headliner on Saturday at the SAP Center in San Jose, Calif. A victory there would make Ortiz the first fighter to ever to capture titles in Bellator and the Ultimate Fighting Championship.

Ortiz will enter the cage on a two-fight winning streak. The 40-year-old UFC hall of famer last appeared at Bellator 131 on Nov. 15, when he took a split decision from Stephan Bonnar at the Valley View Casino Center in San Diego. Prior to his arrival in Bellator in 2014, Ortiz had gone 1-7-1 in his previous nine outings, leading many to speculate that retirement was just around the corner. He remains one of MMA’s most recognizable figures, with wins over Wanderlei Silva, Vitor Belfort, Forrest Griffin, Ryan Bader and Ken Shamrock anchoring his resume.

The undefeated McGeary sports nine finishes among his 10 pro victories, including 22-, 27-, 76-, 78- and 91-second stoppages. He last fought at Bellator 134 on Feb. 27, when he claimed the light heavyweight championship with a five-round unanimous decision over Emanuel Newton at the Mohegan Sun Arena in Uncasville, Conn. A Renzo Gracie protégé, the 32-year-old McGeary has also spent time training at the American Kickboxing Academy.

With the Ortiz-McGeary showdown on the marquee, here is what to watch for at Bellator 142:


The Singapore-based Glory kickboxing organization will link arms with Bellator MMA for the first time to produce what is being described as a “hybrid” event. Sixteen MMA bouts will be contested inside the Bellator cage, with five kickboxing matches set for the adjacent Glory ring. Some of the fights will take place simultaneously.

In the featured kickboxing scrap, Saulo Cavalari collides with Zack Mwekassa across five three-minute rounds for the vacant Glory light heavyweight championship. Gokhan Saki was stripped of the title in July, clearing the way for the Cavalari-Mwekassa rematch. Operating out of Curitiba, Brazil, Cavalari (29-3) knocked out Mwekassa (15-2) with a third-round head kick at Glory 18 in November. Mwekassa has since rebounded with a first-round knockout against Carlos Brooks at Glory 22. 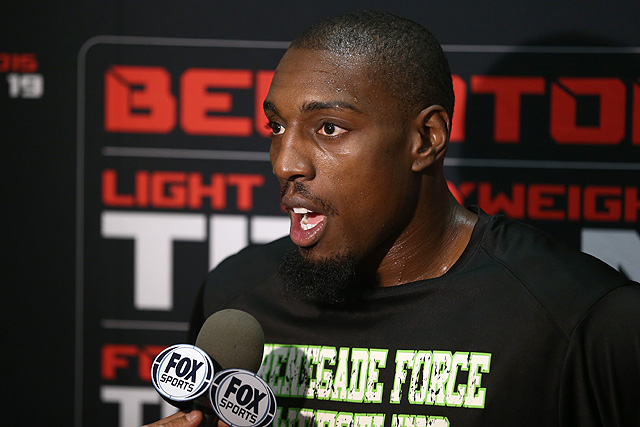 (+ Enlarge) | Photo: D. Mandel/Sherdog.com
Davis has his work cut out for him.
Phil Davis will get his chance to prove that the UFC’s loss was Bellator’s gain.

“Mr. Wonderful” will take part in a four-man, one-night tournament that will give rise to the next No. 1 contender at 205 pounds. Davis will face Newton in one semifinal, with former Strikeforce champion Muhammed Lawal locking horns with Linton Vassell in the other. The winners will meet in the final, barring injury.

Davis and the Ultimate Fighting Championship parted ways following his split decision loss to Bader at UFC on Fox 14 in January, despite the fact that he had compiled 9-3 record within the promotion. An Alliance MMA representative, he owns victories against Brian Stann, Antonio Rogerio Nogueira, Alexander Gustafsson, Lyoto Machida and Glover Teixeira. Davis was a four-time NCAA All-American wrestler and onetime national champion at Penn State University, where he remains tied for 13th on the school’s all-time wins list (116).

Newton finds himself on the rebound after he relinquished the Bellator light heavyweight crown to McGeary in February. The defeat snapped a seven-fight winning streak for the 31-year-old Californian. Newton has not suffered consecutive losses in almost six years.

NEW ROOTS FOR ‘THE PUNK’


Uncertainty has its claws in Josh Thomson.

The former Strikeforce champion will make his promotional debut in a lightweight showcase opposite Mike Bronzoulis, as he tries to put a disappointing second tour in the UFC behind him. Thomson will enter the cage on a three-fight losing streak, having dropped decisions to Benson Henderson, Bobby Green and Tony Ferguson in succession. A fixture at 155 pounds for more than a decade, “The Punk” turns 37 in a matter of days and has not tasted victory since he disposed of Nate Diaz with a head kick and follow-up punches in April 2013. Time seems to be of the essence.


Carlos Eduardo Rocha was once a serious prospect at 170 pounds.

The Brazilian christened his career with eight straight finishes, seven of them inside one round, and arrived in the UFC with considerable hype in 2010. Rocha did not disappoint, as he tapped “The Ultimate Fighter” Season 11 finalist Kris McCray with a first-round kneebar at UFC 122. Stardom seemed within reach for the Brazilian jiu-jitsu black belt. However, back-to-back decision losses to Jake Ellenberger and Mike Pierce led to his surprising release, and after a July 2013 defeat to Florent Betorangal at a regional event in Germany, Rocha disappeared from the scene.

Now 34, Rocha will return to MMA for the first time in more than two years when he takes on Strikeforce veteran James Terry. How much “Ta Danado” has left in the tank remains to be seen.