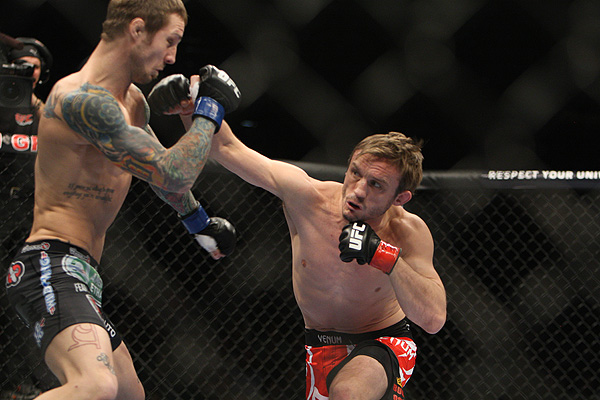 Brad “One Punch” Pickett owns a 4-3 mark in the UFC. | Photo: Dave Mandel/Sherdog.com


Reconstructive knee surgery has shelved John Dodson until 2015, leaving a glaring hole near the top of the Ultimate Fighting Championship’s flyweight division.

Enter Brad Pickett and Ian McCall, two men with whom 125-pound champion Demetrious Johnson has become intimately familiar. Pickett and McCall will lock horns at UFC Fight Night “McGregor vs. Brandao” on Saturday at The O2 in Dublin. In Dodson’s absence, the winner could emerge as the No. 1 contender for the flyweight title.

Pickett has rattled off 14 wins in 18 fights. The 35-year-old American Top Team representative last appeared at UFC Fight Night “Gustafsson vs. Manuwa” in March, when he captured a unanimous verdict over Neil Seery at the O2 Arena in London. A well-rounded martial artist who has engaged in his share of firefights, Pickett has drawn “Fight of the Night” bonuses in four of his seven UFC appearances. The former Cage Rage and Ultimate Challenge MMA champion was also the first man to defeat Johnson, having done so while the two were competing as bantamweights under the World Extreme Cagefighting banner.

McCall was once champion of the Tachi Palace Fights promotion, where victories against Jussier da Silva, Dustin Ortiz and Darrell Montague made him one of MMA’s most-talked-about flyweights. The 30-year-old Team Oyama export has not fought since UFC 163 in August, when he posted his first win inside the Octagon and cruised past Iliarde Santos to halt a two-fight losing streak. Like Pickett, “Uncle Creepy” has past history with Johnson; the two fought to a controversial draw at UFC on FX 2 in March 2012 before “Mighty Mouse” walked away from their UFC on FX 3 rematch with a unanimous decision three months later.

With the high-stakes Pickett-McCall showdown in a featured slot, here is what to watch for at UFC Fight Night “McGregor vs. Brandao,” as the Ultimate Fighting Championship returns to Ireland’s capital city for the first time in more than five years:


Few men have entered the UFC to such great expectations, and Conor McGregor has thus far lived up to them.

The former two-division Cage Warriors Fighting Championship titleholder will return from close to a year-long layoff when he squares off with “The Ultimate Fighter” Season 14 winner Diego Brandao in their UFC Fight Night headliner. McGregor underwent surgery for an ACL tear following his unanimous decision victory over Max Holloway in August and has not competed since. Blessed with skilled hands and a mean streak, the 26-year-old charismatic Irishman has finished nine opponents during his current run of 10 straight wins. McGregor sports four-, 16-, 67-, 82- and 93-second stoppages on his resume.

A replacement for the injured Cole Miller, Brandao has proven inconsistent throughout his career, mixing the sublime with the subpar. The 27-year-old Jackson-Wink MMA standout finds himself on the rebound following a knockout loss to Dustin Poirier at UFC 168 in December. Conditioning has been an issue for Brandao in the past, and McGregor appears to possess the weaponry necessary to test him in that arena. According to FightMetric data, he lands an average of 4.59 strikes per minute -- a figure that would rank third among active UFC featherweights if he had enough bouts under his belt to qualify. 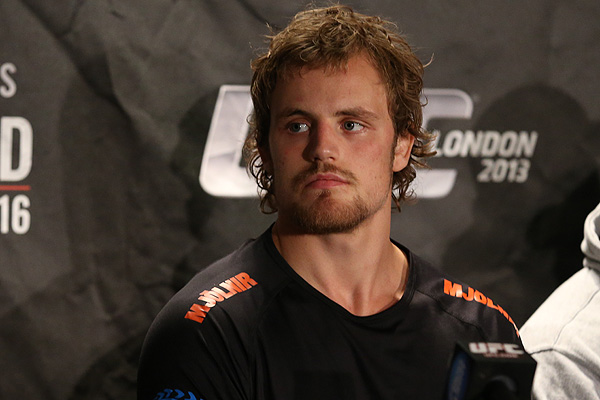 The unbeaten Icelandic star will put his 12-fight winning streak on the line when he tests his mettle against Zak Cummings in the co-main event. A Renzo Gracie disciple, Nelson has turned away DaMarques Johnson, Jorge Santiago and Omari Akhmedov in three Octagon appearances, scoring a pair of submissions in the process. A Brazilian jiu-jitsu black belt with a karate base, the 25-year-old has delivered 11 of his 12 victories by knockout, technical knockout or submission, 10 of them inside one round.

In Cummings, Nelson faces a veteran on the rise. A graduate of “The Ultimate Fighter” Season 17, he has quietly put together four straight wins. Cummings, who replaces the injured Ryan LaFlare, last appeared at UFC Fight Night “Brown vs. Silva” in May, when he handed Nova Uniao’s Yan Cabral his first career defeat, weathering an early submission threat to pick apart the Brazilian in close quarters before neutralizing him on the mat. He has been finished only once -- by a Tim Kennedy north-south choke -- in 20 professional bouts.


Josh Sampo wants a piece of the flyweight pie.

The former Championship Fighting Alliance titleholder will try to bounce back from his first defeat in nearly two years when he clashes with SBG Ireland’s Patrick Holohan in an under-the-radar bout at 125 pounds. Sampo carried a five-fight winning streak into UFC 170 in February, only to squander the momentum in a unanimous decision loss to former Bellator MMA champion Zach Makovsky. Can “The Gremlin” rediscover the formula that had him on the cusp of contention?

Holohan, 26, cut his teeth on the Cage Contender and Chaos Fighting Championships circuits but has yet to encounter someone of Sampo’s pedigree. He has finished his last three opponents, two of them by choke-induced submission. A February 2011 draw with Neil McGuigan, which was later avenged, remains the lone blemish on Holohan’s otherwise pristine resume.


Cathal Pendred and Mike King were Team Penn stablemates on Season 19 of “The Ultimate Fighter.” The situation, as they say, has changed.

Pendred and King will face each other in an undercard middleweight scrap, perhaps with a seat on the UFC roster at stake. A former Cage Warriors champion, Pendred is 7-0-1 in his last eight outings, including wins over Nicholas Musoke, David Bielkheden and Che Mills. Pendred reached the semifinals on “The Ultimate Fighter” before being eliminated by eventual Season 19 winner Eddie Gordon.

King has finished each of his first five opponents since turning pro. The 30-year-old last fought at a Championship Fighting Alliance event in January, when he needed a little more than two minutes to punch Billy Garris into submission. Like Pendred, he was ousted by Gordon on “The Ultimate Fighter.”