Saturday gave us another entertaining outing for the UFC in the U.K., and with it we get a tidy FightFinder entry listing the winners and losers for the evening. Of course, that doesn’t quite cover it all because sometimes a win or a loss is worth a lot more than just another mark on your ledger.

With that in mind, let’s take a closer look at who won big and lost even bigger this weekend.

After his return to the homeland at UFC 75 against Matt Hamill flopped harder than Heidi Montag’s “singing” career, “The Count” has rebounded to snag a pair of impressive wins in the U.K. His victory Saturday against Chris Leben locks up a spot for him as a coach on the next season of “The Ultimate Fighter” as well.

With next season’s gimmickry set to be a Team U.S. vs. Team U.K. format worthy of the blindly nationalistic fans that boo anyone unfamiliar with Lynyrd Skynyrd, Bisping can not only raise his own public profile but will also take on the Team USA coach (expected to be Dan Henderson or Rich Franklin) for a shot at middleweight champ Anderson Silva.

Despite some rough patches and failed ideas at the outset of its English expansion, the UFC is rapidly turning into Jason Voorhees and the U.K. is starting to look like Camp Crystal Lake as Dana White and his merry men wipe out the competition. With cards highlighting local talent and evenly matched bouts, the UFC has figured out what the U.K. fans want.

Better yet, now that Bisping has become the hometown superstar the UFC was hoping for, the promotion has a bankable commodity to trot out every time it crosses the pond. Throw in exciting European contenders like Paul Taylor and the upcoming influx of British talent sure to come pouring in from the next season of “TUF,” and things are looking rosy for the UFC in the U.K. 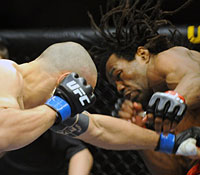 Photo by Sherdog.com
Luis Arthur Cane proved to
be too much for Sokoudjou
to handle.
Experience

On a card loaded with blue-chip prospects like Rameau Thierry Sokoudjou, Paul Kelly and Brandon Vera, it was their more experienced opponents who took home the win bonuses. Obviously no one should write off such a talented trio, but their failure brings into sharp focus what happens when talent is substituted for savvy.

If the UFC is ever going to develop into an organization that actually nurtures talent instead of merely cherry picking it from other promotions, it would do well by trimming its roster even further and keeping the focus on building up its ranks rather than signing everyone it can find with a FightFinder entry and a pen.

For once, Keith Jardine’s Freddy-Krueger-by-way-of-the-Cheshire-cat mug seemed perfectly normal, as his win over Brandon Vera this weekend gave him plenty to smile over. By taking out one of the UFC’s top young guns in a competitive bout, Jardine went a long way toward cementing his claim to a title shot.

Considering that belt is presently around the waist of prior Jardine KO victim Forrest Griffin, “The Dean of Mean” would do well by avoiding any of his past trip-ups if he wants to turn Griffin into Niagara Falls all over again.

While Brock Lesnar keeps the forums buzzing and Cain Velasquez remains the darling of hardcore fans, Shane Carwin keeps piling easy wins onto his resume and forcing the world to take notice at a time when the heavyweight division needs more saviors than the New York Knicks.

Granted, Carwin blitzing Neil Wain at UFC 89 was assumed by nearly all, but when prospects are short on supply and high in demand, you’ve got to bring them along properly. Thankfully, the UFC is doing just that with Carwin and the patience may just pay off in a big way. 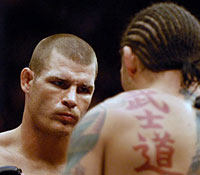 Photo by Sherdog.com
Is Bisping ready for a
fighter like Anderson Silva?
Great Expectations

Yes, Bisping won and kept the UFC’s battle plan from turning into Waterloo. But the end game for Bisping is a UFC title run, and a blasé win over Chris Leben has done nothing to dispel the notion that he is little more than a solid, mid-range fighter at this point.

Maybe Bisping pulls a Forrest Griffin and proves us all wrong, but as it stands now, it’ll be a tough road for “The Count” taking on the current crop of middleweight contenders. Let’s not even consider what would happen if Bisping follows the yellow brick road to Anderson Silva. My best guess is that you’d need to call in The Count from Sesame Street to keep track of how many shots to the noggin Liverpool’s fighting pride would end up taking.

There was a time when the chiseled Cameroonian with a big name and even bigger game was on the tip of every MMA fan’s tongue. And really, how couldn’t you be impressed with Sokoudjou?

A pair of senses-shattering KO wins over Ricardo Arona and Antonio Rogerio Nogueira looked like they’d be the foundation of a career that would climax with Sokoudjou’s heel on the throat of the entire light heavyweight division. It turns out that he doesn’t like it much when his opponents get out from underneath that heel, though.

That issue came to the fore in Sokoudjou’s losses to Glover Teixeira and Lyoto Machida, and it reared its ugly head yet again in his loss to Luis Arthur Cane. If anyone is going to start taking Sokoudjou seriously again, he’ll have to learn how to take punishment as readily as he dishes it out.

So, anyone else still see Vera holding the heavyweight and light heavyweight title anytime soon? Just like everyone else in the post-Muhammad Ali era, Vera has learned that talking a big game is a small part of the equation.

Backing up all that smack talk is what counts. After dropping three of his last four fights, Vera is looking more like a club fighter than the world-beater he made himself out to be. Pride comes before the fall, but Vera seems to have skipped the rise, gorged on pride and wallowed in the fall.

It’s starting to look like Paul Taylor has cornered the market on irony in MMA. His questionable split-decision loss to Chris Lytle actually got him a $40,000 “Fight of the Night” bonus -- the third time Taylor has gotten that bonus in defeat.

We all know that the UFC isn’t in the habit of leading exciting bangers out the door, but a third loss in four fights means Taylor is likely stuck playing gatekeeper for the foreseeable future. Then again, I’d be pretty content with losing if it got me an extra 40K on my paycheck. Feel free to e-mail the bosses about that one. 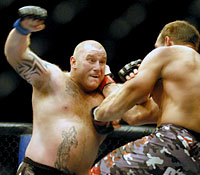 Photo by Sherdog.com
"RUKS 2.0" was no match
for Shane Carwin.
Random U.K. Slugger

Anyone paying close attention to the undercard of any UFC show in Europe has noticed Random U.K. Slugger (RUKS). Some of you may remember the previous incarnation of RUKS, Colin Robinson, who promptly went 0-2 in the UFC.

Unfortunately, RUKS 2.0 proved no more capable as Neil Wain strolled into the cage sporting a spare tire and the usual desire to “trade bombs” and “throw down.” Of course, Shane Carwin was in the same cage and he had actual MMA skills and the memory required to remember that this is a multifaceted sport.

As the UFC keeps on building itself up across the pond, keep an eye out for the hotly anticipated RUKS 3.0. Can’t wait for that one.