If persevering through the unexpected things life throws at you is any kind of measuring stick for fortitude, then Sara McMann is tough as nails.

So almost naturally, McMann, the first female American wrestler to receive a silver medal in the Summer Olympics, is preparing to make her transition into MMA this summer, hoping to test herself in yet another avenue that requires resolve. The 29-year-old will make her debut as an amateur on Ultra Fight America’s “Clash at the Coliseum” card on June 11 in North Charleston, S.C. against an opponent yet to be named. McMann plans to fight in both the 125- and 135-pound divisions.

“I’m really excited for what’s to come,” McMann said. “I’ve found that wrestling is really limiting. There’s so many different rules in wrestling that prevent you from dominating opponents. Brazilian Jiu-Jitsu is a little farther from that, but MMA is the closest thing to being unrestricted. It’s exciting to me. Learning how to strike and kick and pull off submissions has really grabbed my interest.”

The journey that McMann has taken to her current path is a story for the ages.

After serving on the varsity men’s wrestling team at McDowell High School in North Carolina, McMann moved on to the University of Minnesota-Morris, one of the only institutions in the country with a women’s wrestling team. McMann’s older brother, Jason, was a member of the Lock Haven University wrestling squad, the same program that has spawned former WEC lightweight champion Jamie Varner and current UFC light heavyweight Tim Boetsch.

Following an altercation with players on the university’s football team, Jason McMann mysteriously disappeared in January 1999. Three months later, his body was found in a wooded area 30 miles away from the school. Sara transferred to Lock Haven in order to be closer to her family and joined the school’s wrestling team in honor of her brother. After an initial search failed to turn up any suspects, an anonymous tip sent in to police three years later led to the arrest of a former Lock Haven football player and three accomplices.

To help cope with the loss, Sara McMann turned her focus to wrestling. Unable to wrestle under NCAA rules after receiving monetary support from USA wrestling, McMann thrived on the international circuit. She won a trio of national championships from 2000-2003 and qualified for the 2004 Athens Summer Olympic games, where she won her prized silver medal at 139 pounds.

Following the games, McMann and her fiancé, three-time All-American wrestler Steven Blackford, decided to attend Columbia University and further pursue their education. On the drive from the Olympic Training Center to Washington D.C., for a short stay with Blackford's family, McMann lost control of her vehicle on I-76 in Brush, Colo. The vehicle overturned and tumbled down an embankment on the side of the road. McMann and Blackford were ejected from the truck and Blackford was pronounced dead at the scene.

McMann recovered from her injuries and spent months coping with the accident before moving to Iowa to train with the Iowa University wrestling team, where she met current boyfriend Trent Goodale, with whom she has a daughter. Since 2004, McMann medaled twice in the world championships and won the Pan American Games in her weight class in 2007. 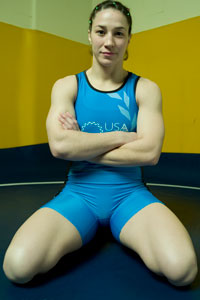 Photo by Amy Quip
Sara McMann
“My life is really filled with the highest of highs and the lowest of lows,” said McMann. “I’ve come to accept the fact that that’s the way it’s going to be whether I like it or not. If I don’t go after the really high stuff, I’m going to suffer. My daughter is the most wonderful thing in my life right now. No matter what happens, she’s my top priority. That definitely helps me to overcome a lot of the tragedy that has happened.

“Even through everything that has gone on, I’m still driven. I still have a lot of athleticism even though I’m about to turn 30. I still have a lot of motivation to be the best at what I do. Even if I decided to not do this (MMA) and just learn table tennis or something -- I don’t know how to train any other way but to improve my strengths, work on my weaknesses and become the best. I find that it’s really contagious for my personality.”

The switch from wrestling to MMA was made easier by an incident at an April U.S. Open match earlier this year where McMann was declared the winner only to have the decision immediately overturned without much explanation.

“The mat referees scored it and I won the match. They were ready to raise my hand and another judge came running down and told the referee to raise my opponent’s hand. It made no sense,” McMann said. “You usually have your mat referees, but a jury of other officials is something new in wrestling for this year. They came down and overturned the match, but they did it in a way that didn’t even follow correct procedure under the new rules.”

McMann immediately retired from active competition after the match and filed a grievance with USA Wrestling along with fellow former U.S. Olympians Patricia Miranda and Randi Miller. Despite all of her success, McMann doesn’t foresee a return to the wrestling circuit in her future courtesy of the events that took place.

“I could continue to wrestle and go to court to win all of my close matches or I could get into MMA, which excites me and doesn’t really involve politics,” said McMann. “There’s so much politics involved with wrestling and it’s to the point where I don’t want to deal with it anymore.”

Instead McMann has concentrated on mixed martial arts, which she began studying around the birth of her daughter almost two years ago. Recently, McMann hooked up with longtime promoter and manager, Monte Cox, becoming only the third female under Cox’s umbrella along with Jennifer Howe and Tara LaRosa.

“While I was pregnant, my training was very limited,” McMann said. “I was basically doing what was safe for me to do -- watching video, slowly learning jiu-jitsu and working on striking techniques. Now I’ve started training full-time. I’m going full steam with submission and striking and everything. I’m very excited about the progress that I’ve made so far.”

McMann has planted herself in South Carolina, where she has been spent time working with local wrestling teams as well as BJJ specialist Romero “Jacare” Cavalcanti. She will now finish out her training camp for her June 11 debut alongside local flyweight prospect Jimmy Fowler and American Top Team veteran Pat Seidel. She also hopes to work with LaRosa and many others in the near future.

“I’m excited to get in there and work with fighters and just soak up as much as I can,” McMann said. “I really want to get up there [to Philadelphia] and train with Tara as soon as possible. That’s probably one benefit from aligning with Monte. I love the way that she fights. She has so much experience and I think it would be great to train with and learn from her. I just can’t wait to get in there and test myself in this sport.”
<h2>Fight Finder</h2>
Sponsored by