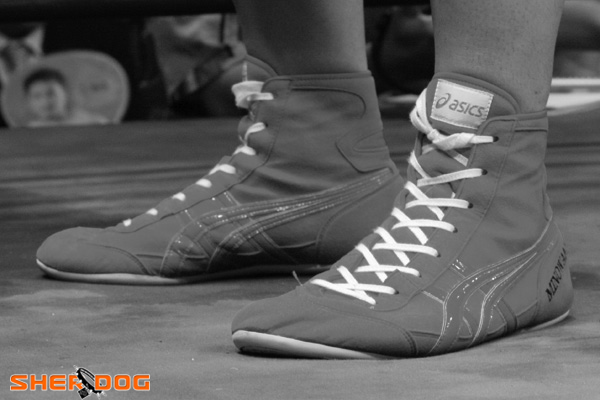 WASHINGTON, D.C. -- Walking through the halls of Bender Arena, I was in shock. There was a mob of people outside the venue an hour and a half before the doors even opened.

I had done research on past events; in most articles, the storyline was typical: “Look at all these great wrestlers with no one to watch them.” Attendance hadn’t always been stellar at past events, and seeing as how I was relative novice when it came to attending collegiate wrestling matches, I expected a similar turnout at the 2012 NWCA Classic at American University in Washington, D.C.

I had my story written before I walked through the door. But I was in for a surprise.

Before the event began, as the crowd watched a montage of Jeff Blatnick’s career on the jumbo-tron and observed a moment of silence in remembrance of his passing, I realized that while some of wrestling’s greats may be gone, the sport is still going as strong as ever. Even with MMA poaching some of its top talent, as University of Maryland head coach Kerry McCoy tells me, “there’s no question that MMA and wrestling enhance each other.”

But why would an athlete, when faced with choosing between wrestling -- which pays almost nothing even at the highest level -- and professional MMA, choose to wrestle? We see fighters like Canadian prospect Rory MacDonald, who began simply as a mixed martial artist instead of coming into MMA with a background in a specific discipline. In the modern age of MMA, why wrestle?

“I think it’s ignorant to think that MMA can survive without wrestling. Wrestling can survive without MMA. They should feed off each other,” McCoy elaborates. “MMA gives wrestlers a viable option if they don’t want to go into coaching or the Olympics, and it’s an easy transition for them. Wrestling prepares your MMA champions. I want to see wrestlers be successful in MMA. I’m a supporter of it.”

But why did this event fill with 3,376 people, while other NWCA Classics failed to draw? The same reason why MMA matches between all-time greats draws more viewers than, say, Pat Barry versus Cheick Kongo.

“You may not get one versus two every match, but you will get [wrestlers] in the top five. That’s what makes it huge,” McCoy said. “The hype was the super-match between David Taylor, who is an NCAA champion, and Kyle Dake, who is a three-time NCAA champion at three different weight classes. That’s what a lot of people came here to see.”

The D.C. area had never had a wrestling event of this size or scope before, yet the crowd was raucous as Penn State Nittany Lion Nico Megaludis opened the night with a victory over Illinois’ Jesse Delgado. The Penn State fans had trekked five-plus hours to the nation's capital, and their voices were heard loudly as they chanted their traditional “We are Penn State,” call and response. Currently headed by former four-time NCAA champion and Olympic freestyle gold medalist Cael Sanderson, the Penn State wrestling program has a long and storied history littered with national champions like UFC light heavyweight Phil Davis.

The upstart program at the University of Maryland does not have that same long and storied tradition of winning. However, even at Maryland, wrestling fandom grows. As Josh Asper, a senior All-American for the Terrapins, walked onto the mat to take on Jordan Blanton of Illinois, chants of “Asper-ator” permeated the space surrounding one particularly dedicated fan. A lawyer in the local D.C. area, this fan attends every match of Asper’s.

As Dake and Taylor faced off in the center of the mat, the cheers rivaled any MMA match I had been to. This loud and fervent fan base was getting their version of Georges St. Pierre versus Anderson Silva. As the two wrestlers exchanged takedown attempts and ankle picks over the course of a nine-minute, six-period long match, the crowd went wild. Victorious, Dake took in the cheers of the crowd who had traveled from various points in the country to see this match. While walking around Bender Arena, I talked to fans from California who had traveled 3000 miles just to attend the event.

The sport is alive and well. Though an innovator like Jeff Blatnick may have passed on, his efforts to develop a partnership between wrestling and MMA are not forgotten in either community.

“Ironically enough, all the Division I head coaches were together at a coaching summit. [Cornell University head coach] Rob Koll came to me and had a text that Jeff Blatnick had passed. By the end of the meeting, it was confirmed,” McCoy said. “It’s ironic that all the Division I coaches were together, because that’s who Jeff Blatnick was to the sport. He announced the NCAA tournament. He announced the Olympic Trials. He announced the Olympics. He was a huge part of wrestling. Being from New York, he was an inspiration after the fact that we had a New York guy who won a gold medal. He paved the way. Truly, he will never be replaced.”

As the night closed, Dake, Asper and Taylor were all mobbed by a group of children looking for their autographs. Though tired, sweaty, and probably bogged down with missed classwork, they stayed and signed every autograph asked of them.

So why would anyone choose this over MMA?