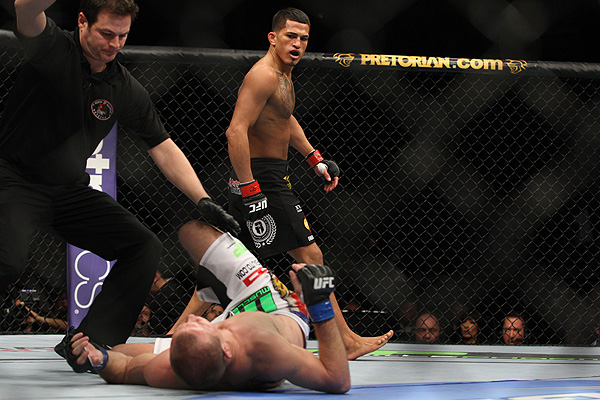 
A little more than two weeks ago, Sherdog Managing Editor Mike Fridley called me and pitched the idea of a “pre-season All-Violence article.” Far be it from me to turn down any opportunity to write about the most extravagant, technical and brutal in the cage, I accepted. Figuring out exactly what to write was a bit harder.

For three years now at Sherdog, come the first week of January, I have penned year-end superlatives for the most exceptionally violent, awe-inspiring MMA athletes. Year-in and year-out, particular fights or fighters are given “best of” status and canonized forever. We remember Mauricio Rua’s 2005 campaign and Jon Jones’ reign of terror in 2011. I figured it was high time people got real about their relative bloodlust and celebrated it, or more aptly, honored the fighters who provided it. However, to write a pre-season All-Violence article seemed overwhelmingly difficult.

Despite my trying, I cannot see into the future and thus cannot really give any tips on which fighters might go 4-0 with four stoppages in the big show this year. This is not like the preseason All-America team. We are a little more than one month into the New Year, so recapping all the animated .gif fodder from 2013 seems premature. What is there to say about MMA violence in 2013? Well, judging by the calendar, there might be an awful lot of it.

I noted in my 2012 All-Violence team piece that the year past was a rough one for violence among major MMA champions and elite contenders. Anderson Silva had just one legitimate, ostensibly competitive fight; Jose Aldo spent the last 50 weeks of the year inactive; and Nick Diaz’s repeated regulatory indiscretions had him spending the last 11 months of 2012 on the sidelines. Many familiar faces of the two prior All-Violence teams were relegated to just a single fight or two, like Chan Sung Jung and Alexander Shlemenko. Even Jones, who embarrassed Rashad Evans with elbow jabs and hulked Vitor Belfort after having his arm mangled, seemed somehow tamer than before.

In 2012, injuries swept through the upper ranks of MMA like syphilis through medieval royals, in addition to the likes of Diaz and Alistair Overeem, whose highlight-reel antics were curtailed for other reasons. This gave us strange, sensational outcomes from overlooked commodities. Who could have predicted Cub Swanson’s trio of knockouts or Matt Brown going 4-0 in grisly fashion? Let us be clear: this is fantastic. After all, one of the biggest problems facing MMA right now, especially with the UFC, is the sheer volume of product. When undercarders and mid-carders can provide the bang-for-buck that consumers casual and hardcore alike crave, it is a distinct positive for all parties concerned, except for those they defeat, I suppose.

However, no disrespect to MMA’s exciting lunch-pail brigade, but for the most part, the best moments in any sport are more likely to be delivered by its best exponents. When you think of the aforementioned Swanson, you probably still think of when he absorbed Aldo’s split-second flying nuclear attack. Is it really surprise that a moment like “The Showtime Kick” belongs to Anthony Pettis? You can probably even recall the finishes to multiple Silva fights in much richer detail than others. Photo: D. Mandel/Sherdog.com
Aldo has racked up eight KOs with Zuffa.
Undoubtedly, there is some cognitive bias here. These kinds of marquee fighters are placed on higher-profile cards, against higher-profile opponents and generate more interest and discussion for their bouts. These are all factors in our violence nostalgia. However, more often than not, MMA’s traditionally exciting fighters deliver our most indelible memories -- and with a notable consistency.

Again, the annals of jaw-dropping MMA outcomes are filled with also-rans getting their 15 minutes of fame. One of the most iconic MMA knockouts ever is Brad Kohler on Steve Judson, after all. Ryo Chonan is a fun fighter -- he has had some pretty gnarly, bloody fights in the past -- but is he really who you would expect to be behind arguably the greatest submission in MMA history and against arguably the greatest fighter in MMA history? There are surprises. However, to indulge a cross-sport comparison, perhaps the greatest single run I have seen in a football game was Garrison Hearst’s 96-yard touchdown run against the New York Jets in overtime back in 1998.

It is the kind of sports clip that you could show to a soccer-loving exchange student staying in your home and maybe make an NFL fan out of him.

Yet, I was raised by a diehard 49ers fan, and I cannot think of another single Hearst run in my head, other than when he horrifically broke his ankle. Walter Payton retired the year I was born, yet I can vividly describe half a dozen of his runs; the same can be said for Earl Campbell and even former UFC commentator Jim Brown. They were in another realm of ability in comparison to their contemporaries and it manifested in awe-striking fashion on the football field with regularity.

All of this rambling is to say, MMA in 2013 is in a great place so far. Not only have multiple MMA action heroes healed, but a curious climate in the MMA game has forced both the Ultimate Fighting Championship and Bellator Fighting Championships to go bold in the matchmaking department. Seeking to rejuvenate its product through engaging a network television audience, the UFC has smartly focused its Fox cards heavily on the lightweight division and below, while creating big-ticket pay-per-view main events based on the biggest names available. While this has resulted in the lamentable Jones-Chael Sonnen fight at UFC 159, it has also created an environment in which Aldo can fight two top 5 lightweights consecutively.

As for Bellator, the company borderline sabotaged its own seventh season last year, looking to keep its talent fresh for Season 8 and the company’s debut on Spike TV. While usual violence bringers Paul Daley and War Machine fell out of the season’s welterweight tournament to the chagrin of some, Bellator’s champions have atoned for their absences. Pat Curran was technical and workmanlike in defeating Patricio Freire, while Michael Chandler looked like an All-Violence candidate with his domination of Rick Hawn. Alexander Shlemenko polished off Maiquel Jose Falcao Goncalves in devastating fashion to take the middleweight crown after a car accident robbed us of his usual half-dozen fights and multiple-crazy-knockouts-in-a-year shtick. Even much-criticized riding time enthusiast Ben Askren delivered an entertaining and sort of gruesome fight in pulverizing Karl Amoussou.

Bellator has struggled to turn its champions into stars, and pushing them vigorously on Spike will be part of trying to correct that. It also means that, after a year in which Bellator champions were almost entirely absent from the promotion, there is a developing backlog of tournament winners and challengers, so multiple Bellator titleholders could defend at least three times this year.

Photo: Keith Mills/Sherdog.com
Chandler brings the pain with regularity.
There is a lot of major MMA already on the docket for 2013, but perhaps no bout is a greater sign of the times than Aldo-Pettis. It is a fight with no logical leg to stand on if you are looking at it through the traditional UFC matchmaking lens. Pettis is a lightweight who has been promised a title shot in that division, and Ricardo Lamas just beat up Erik Koch, who was supposed to face Aldo last summer. It is predicated entirely on the notion of putting an exciting champion who needs a worthy foil against the best -- and, coincidentally, most fun to watch -- fighter the UFC can find. I am all for Lamas getting his day in court against the UFC featherweight champion, but in regards to a bout that is thrilling and competitive in this moment, Aldo-Pettis takes the cake.

The Aug. 3 featherweight showdown might be the best pairing of two action fighters in a meaningful MMA match, depending on how you feel about Mirko Filipovic’s Pride Fighting Championships open weight grand prix massacre of Wanderlei Silva.

When at their respective bests, Aldo and Pettis can do things that few -- if any -- other MMA fighters can do, and they do it with regularity.

Think back to Pettis smashing through Donald Cerrone on Fox. Remember his cartwheel kick or jumping knee off the fence? You do, now that I jogged your memory. Most fighters would be happy to accomplish one, never mind both of those techniques in a fight. Instead, Pettis makes you forget about them almost entirely because he went to the body with a liver kick so devastating that it stopped Cerrone for the first time in 25 professional fights.

Pettis is MMA’s premier sniper. It is hard to find any kind of statistical quantification to back up how much destruction he can bring because of his explosive one-strike kill shot ability. He is, however, apart from Aldo, perhaps the best kicker at the elite levels of the sport. In the UFC and World Extreme Cagefighting combined, Pettis has three roundhouse kick stoppages of some kind. That is more than anybody in the history of the promotions. If you include Pride, only “Cro Cop” tops him with seven.

Photo: K. Mills/Sherdog.com
Shlemenko is oftentimes violently spectacular.
Pettis is the challenge Aldo deserves. So far, the Brazilian dynamo has racked up eight knockouts under Zuffa employ; no other featherweight has more than two. Not that knockouts are the be-all, end-all of striking, but it is clear to see that Aldo is far ahead of most of his contemporaries on the feet. Moments of success against Aldo, whether they happened for Mark Hominick, Kenny Florian or Frankie Edgar, came when challengers pressed Aldo in the standup, gave chase and did not allow him to explode and counter. It is a daunting task to go tell any fighter to go stalk Aldo and attack him, but if there were a fighter for this assignment -- cue the Joe Rogan jokes -- Pettis is the guy.

For now, Aldo-Pettis, just like all of these wish-list fights, is just ink on paper or pixels on a screen. It is meaningless until they step in the cage and the actual fight reveals itself.

Having gone through 2011 with so many of the sport’s routinely entertaining fighters conspicuous by their absences, I am happy to have that ink and those pixels. It sounds simple to the point of absurdity, but MMA is in its greatest state when in the hands of its stars. I, too, thirst to see the strange carnage that a fight like Mark Hunt-Stefan Struve can produce, but in a year with pound-for-pounders all over the schedule in intriguing combination, your casual “Fight of the Night” contenders might get overlooked.