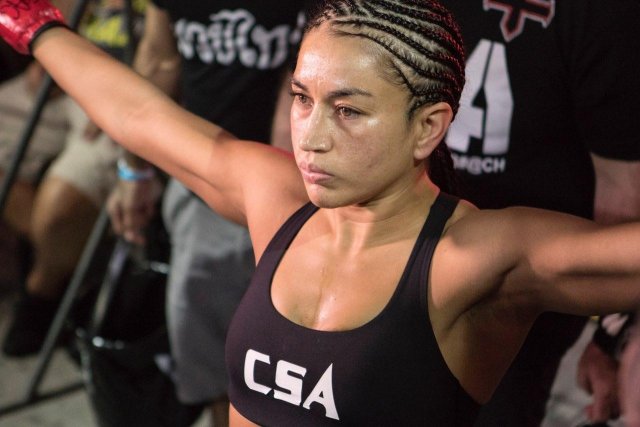 
After a three-year hiatus from the sport, women’s mixed martial arts pioneer Zoila Frausto will return to competition at Combate 31 on Friday night. She will enter the cage at the Save Mart Center in Fresno, California looking to reestablish her name in the industry and earn a lucrative long-term contract in the process.

After seven years and 18 fights, Zoila Frausto had enough of MMA. There was no single, specific reason why she grew tired of the sport she had turned into a career. It was the sum of many different things, both business and personal. “I kind of stepped away from MMA after I moved out of Cincinnati. I just wasn’t feeling MMA at the time,” Frausto told Sherdog.cp,.

The California native moved to the Ohio six years ago to be with then husband, former Ultimate Fighting Championship lightweight Jorge Gurgel. However, the relationship soured, and seemingly her career with it.

“The person I was with, kind of left a bad taste in my mouth when it came to MMA,” Frausto said. “The entire time I was living in Cincinnati I didn’t win one fight. Ever since I changed my name [to Frausto-Gurgel] it was boom, boom, boom, three years in a row I lost. And I was just like, ‘What the hell is going on here? How did I go from a world title to rolling downhill as hard and as fast as I did?’”

With her marriage and career at a low-point, after losing four straight, something had to give. The pair eventually divorced, and she returned to California. Yet the issues in her personal life were only part of the problem. In 2010, the “Warrior Princess” defeated Megumi Fujii in the finals of the Bellator MMA strawweight tournament, making her the first female champion in the company’s history. She earned the biggest payday of her career, and won a title that validated her hard work, yet things would change financially soon after.

“Then I started to get offers for [fights of] $1,000 to show, and $1,000 to win,” Frausto said. It was a stunning turn to go from winning a world title in a major promotion to receiving offers lower that what she had made in her professional debut.

At the time, she had recently started fighting professionally at kickboxing and muay Thai events. The pay was often better than what she was making in MMA. Once her MMA offers started to decline, the decision to step away from the sport permanently became that much easier.

“It just didn’t make sense to go back to MMA if those are the kind of offers I was getting, when it costs me more to go through a camp,” she said. “I wasn’t asking for 30 grand, but you know, two-grand is like a slap in the face. My rent is more than that.”

In her time away, she has still kept quite busy in combat sports. She competed for multiple kickboxing organizations, including Glory. She also won an IKKC muay Thai world title and a WBC national title in kickboxing. “I’ve been consistent when it comes to fighting. I’ve just only been dabbling in MMA here and there,” said Frausto.

Although she hasn’t competed in a sanctioned MMA bout in three years, the “dabbling” she speaks of came in the form of trying out for recent seasons of The Ultimate Fighter. Season 26 of the show in 2017 featured female flyweights, while Season 28 last year offered opportunities to 145-pound female fighters. She did not make the Season 26 cast due to a torn ACL that required surgery. Her attempt at Season 28 was only slightly more fruitful; she was offered a spot as an alternate, since featherweight was far from her customary weight class.

Ever since her failed attempts to make it on a season of TUF, Frausto has been itching to make her return to the cage. “I’ve been wanting to [return] to MMA. I wanted to get back in there as soon as possible, for whoever wasn’t going to throw chump change at me,” she said.

Eventually an opportunity came to compete for Combate Americas. Her one-fight deal with the promotion is paying her far less than what she made to fight Fujii, but still better than the offers she was receiving three years ago. While she doesn’t have contractual stability after the fight, she sees the bout on Friday as a chance to bring renewed interest in her name, which she hopes to parlay into a more lucrative deal via free agency. “It’s one fight. If I do well, [Combate Americas] are going to want to sign me. Other promotions are going to want to sign me as well. And that’s where I want to be. To be able to have options,” Frausto said.

To enter free agency with value, she will need to defeat Jaimelene Nievera at Combate 31. Nievera is a fighter familiar to Frausto, as the Dragon House MMA member has competed against three of Frausto’s teammates, earning victories over her sister Stephanie Frausto, and Charlene Gellner. “We know her very well,” said Frausto. “She’s not a pushover at all. She has the grappling, she has the wrestling [and] she has the striking. I think it’s a pretty good fight for me to come back to, and a test as well.”

Despite being away from competition for so long, Frausto is confident. She firmly believes she is a far better MMA practitioner than she was when she started out 10 years ago. “When I first started, I was going on a lot of hard work, determination and heart,” Frausto said. “I was just super athletic. Now I have everything. I have jiu-jitsu. I have wrestling. I’m a better striker, and I’m able to be a little more comfortable in there. I’m just excited to go in there and show that I’m completely different than when I started.”

The technical aspects of the sport and the skills of its combatants have evolved greatly since Frausto started. However, one aspect hasn’t changed in her opinion: a mostly male fan base appreciating female fighters more for their appearance than for their fighting abilities. It was apparent for Frausto in 2009 as an attractive 26-year-old making her debut, and it still shows up today, an example being the attention Valeire Loureda received for her professional debut on the main card of Bellator 216 last Saturday. “We’re women. It’s just kind of the way it’s going to be. [It’s like that] in every sport and in everything you see. It’s just the way that it is unfortunately. Sex sells in everything,” Frausto said.

This part of the sport has always been a point of contention for her in her career. While she appreciates the compliments she has gotten for her looks, she wishes that were not the first compliment many female fighters receive early in their careers.

“It can be [frustrating] at times. It’s hard to be looked at just for that. Until they see you fight and they are like, ‘oh s---, she can actually fight too,’” she said.

Yet as the rare female fighter with a decade of experience in fight sports, she is willing to impart some wisdom on teammates who do choose to use the attention to improve their finances. Frausto knows there is a fine line to walk for a female to maintain her athletic integrity while benefitting from her looks. “At times it can help too. It’s just the way it is, and somehow that’s how we make a little more money as well. But it’s a thin line too. Don’t go overboard and make yourself look terrible. If you can use it to your advantage, try to stay classy while you’re doing it,” Frausto said.