Renan “Barao” could emerge as a title contender with a victory at UFC 138. | Photo: Sherdog.com


Renan “Barao” has spent much of his career competing in relative obscurity, but a 27-fight unbeaten streak tends to get one noticed.

The 24-year-old Nova Uniao prospect will meet American Top Team’s Brad Pickett in the UFC 138 “Leben vs. Munoz” co-main event on Saturday at the LG Arena in Birmingham, England. The winner could find himself thrust into title contention in a division starved for new-blood challengers for reigning bantamweight champion Dominick Cruz.


Advertisement
Barao made his promotional debut at UFC 130 in May, as he recorded his 16th consecutive victory and defeated former WEC champion Cole Escovedo by unanimous decision at the MGM Grand Garden Arena in Las Vegas. A deft finisher, the Brazilian jiu-jitsu black belt has recorded 18 of his 26 career victories by knockout, technical knockout or submission.

In this exclusive interview with Sherdog.com, Barao discusses the preparation for his all-important showdown with Pickett, training alongside UFC featherweight champion Jose Aldo and moving down to the 135-pound division.

Sherdog: How was your training for the fight?
Barao: My training was 100 percent. I did a lot of physical preparation, wrestling, boxing and jiu-jitsu. I’m training with the entire Nova Uniao staff and helped those who were fighting before me. They helped me, too. It was great.

Sherdog: You live in Natal, but you come to this camp in Rio de Janeiro before your fights. Ahead of UFC 138, when did you arrive in Rio and where are you living?
Barao: I arrived here four months ago. I’m living in an apartment that Andre Pederneiras leaves for people who live outside of Rio so they can train here. I’m there with Ronys Torres, Carlos [Alexandre] “Indio” [Pereira] and some other athletes on the team. We’re all very good friends. We help each other, and that’s pretty cool. 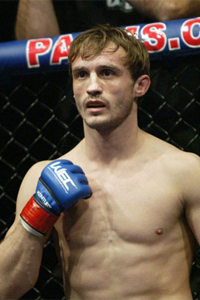 Brad Pickett File Photo
Pickett has won 10 of 11.
Sherdog: What do you know about your opponent at UFC 138?
Barao: Pickett is a tough, experienced guy who always fights well. I’m sure that it will be a great fight. Although this is his UFC debut, he’s experienced and has fought in major promotions like the WEC and Cage Rage. It will be a great challenge.

Sherdog: In your UFC debut, you defeated Escovedo by decision. What did you think of your first fight in the Octagon and are there any differences you have noticed between the WEC and the UFC?
Barao: The UFC has an atmosphere that’s very different from what was in the WEC. I thought I had a good debut, but I could have fought better. During the fight, I found that the way to victory was the takedown, so I unleashed my game. I thought the public and UFC officials liked it, but I think I could have won it earlier without taking it to a decision.


Sherdog: If you defeat Pickett, where would you see yourself in the bantamweight division, or are you already thinking about a title fight?
Barao: No, I don’t think about the title. I’m very focused on Pickett because he’s a very tough opponent. When the opportunity comes to fight for the title, I’ll grab it with tooth and nail, but my focus right now is on Pickett.

Sherdog: Does being on the same team as Aldo benefit you?
Barao: Absolutely, Aldo is a great mirror for me. He’s a great warrior and gives me a lot of advice. He arrived yesterday and has already been in the gym today, talking to me about my fight and giving me some tips. He’s a great champion.

Sherdog: When you fought in Brazil, you competed at 145 pounds. Now, you are fighting at 135. How did this change and has it been a struggle for you to make weight?
Barao: In fact, when I fought in Brazil, I had no proper diet. I came into the fight, lost the weight and got myself ready. Not anymore. Now, I outline a more professional approach and follow a diet. I’ve hit that weight in three fights, and I’ve even come in below the weight limit. I’m well-adjusted, and finding that balance is not a problem for me. It’s boring, but it’s not a problem (laughs).
Related Articles
Latest News
+ VIEW MORE