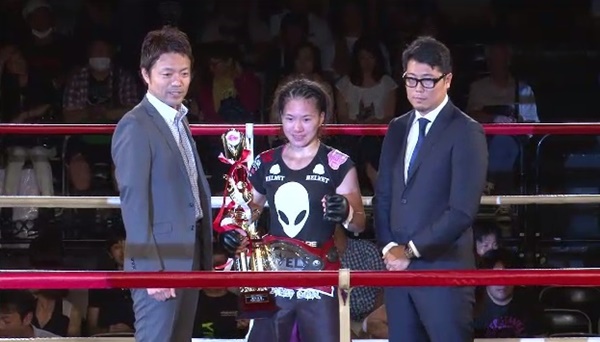 It took two tries and a pair of armbars, but Mizuki Inoue is now a Jewels champion.

On Saturday, 10 days shy of her 20th birthday, strawweight prospect Inoue challenged interim champ Emi Tomimatsu for the undisputed Jewels 115-pound title in the main event of Deep “Jewels 5” at Shinjuku Face in Tokyo. Tomimatsu won the belt under bizarre circumstances in February when she submitted to a third-round armbar but was awarded a disqualification win due to Inoue missing weight.

The opening round of Saturday’s rematch was all standup, and Inoue’s striking won out in the early going as the karate stylist landed stiff jabs and uppercuts to counter Tomimatsu’s equally busy but less precise offense. An even narrower second frame saw Tomimatsu find success with knees in the clinch and short punches in the pocket. Nonetheless, it was the interim champ who headed back to her stool sporting a swollen left eye courtesy of Inoue’s jab.

Early in the final round, Inoue stuffed a shot and reversed the momentum to place Tomimatsu on the ground. Tomimatsu tried to bump-and-roll her way to an escape but instead allowed Inoue to take full mount, where the Nagoya native peeled off to the side with an armbar locked in, forcing Tomimatsu to tap at the 1:33 mark. The win moves Inoue’s record to 8-2, including five wins via armbar, while Tomimatsu falls to 7-8.

The show’s co-main event featured two-time Invicta FC fighter Ayaka Hamasaki, who steamrolled Naho Sugiyama in their 105-pound encounter. Both atomweights came out swinging, clipping one another with wild punches. Hamasaki was the first to find her rhythm, scoring with a pair of right hooks which dropped “Sugi Rock” to the canvas. Sugiyama struggled back to her feet, but it was only a matter of time beore Hamasaki dragged her back down. From there, the AACC product showed her powerful top game, trapping one of Sugiyama’s arms behind her back and pounding away until referee Kenichi Serizawa intervened, giving Hamasaki the stoppage due to punches at 4:01 of round one.

Earlier, Yuko “Amiba” Oya prevailed in a hard-fought strawweight scrap against Sachiko Fujimori. A wild, back-and-forth first round was filled with scrambles and mounts, as both women took their turn attempting submissions and dropping punches from top position. Oya took control in round two, pinning Fujimori to the mat and roughing her up with ground-and-pound, leading the judges to award Oya a unanimous decision after 10 minutes.

Miyoko Kusaka nearly pounded out Tamaki Usui with hammer fists in the first frame of their 105-pound contest, but it was an armbar at 2:40 of round two which forced referee Masato Fukuda to halt the bout in Kusaka’s favor.