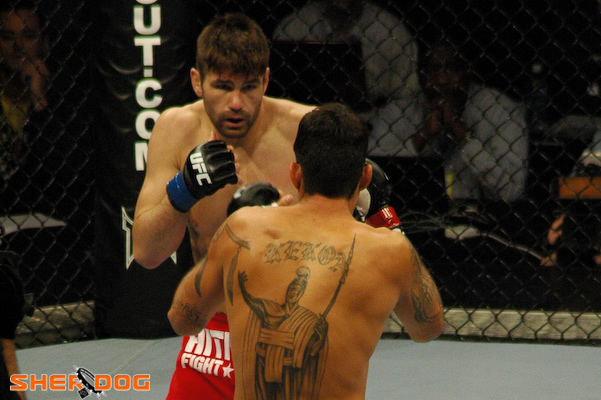 
Jason Day lost his last professional fight to Francis Carmont at something called “Slammer in the Hammer” in Hamilton, Ontario, Canada on June 17, 2011. Although he didn’t know it then, it was the last time he would competitively set foot in a cage.

The victory propelled Carmont to the Ultimate Fighting Championship, where he has remained ever since. Day, meanwhile, a UFC veteran who harbored dreams of a return to the big stage, saw his MMA career come to an abrupt end when he was hit by a car while riding his bike in Vancouver some two months later.

Day only recently tasted victory again, only in a different form, when he was awarded approximately $340,000 by a British Columbia Supreme Court civil jury for the injury he suffered three years ago.

At the time, Day was 32 years old, and while he had lost five of his last six bouts, the names -- Carmont, Ovince St. Preux, Jesse Taylor, Kendall Grove, Michael Bisping -- were not your garden variety mixed martial artists.

Day was initially relieved to learn that he had not broken any bones in the accident. A specialist gave him clearance to train at full intensity, because there was no chance of further damage. It was simply a matter of tolerating pain. That eventually proved too great an obstacle to overcome.

“I couldn’t take any impact on my ankles, so no [plyometrics], no kicking, no sprints. My side-to-side mobility was very limited,” Day told Sherdog.com. “To plant with my left foot and try to push off, both the knee and ankle feel very unstable. From what I gathered from the doctors, basically the gist [of the injury] is there’s scarring and tears in the cartilage in my ankles and in my left knee.”

Before catastrophe struck, Day was confident that he could resurrect his career.

He’d been on the verge of big things before, entering the UFC on the heels of a victory over former middleweight title challenger David Loiseau and making his promotional debut with a first-round stoppage of Alan Belcher on the same night Georges St. Pierre reclaimed his 170-pound title from Matt Serra. With a few breaks, he could get right back on track.

“I had no doubt,” he said. “I was 32; I was still in prime shape. I may have been a little downtrodden, but I lost to legitimate guys. I always knew if I put a string of wins together, the UFC still had my number. That was the game plan.”

When that dream was dashed, it was up to the Insurance Corporation of British Columbia -- which insured Zichau Wang, the driver who hit Day -- to assess the potential value of what would have been the remainder of Day’s fighting career.

“I thought it was a joke,” he said. “We didn’t even respond to it. I met the ICBC adjustor. It’s not the actual people that are greedy; it’s the corporation watching their bottom line.”

As it turned out, Day wasn’t done fighting after all. To challenge the insurance giant, Day’s lawyer at the time recommended that he contact John Cameron, who had previously helped boxer Jegbefumere Albert win a $1 million dollar settlement when his boxing career ended following a car crash.

According to a 2013 report in the Vancouver Sun , Albert, a Nigerian men’s boxing champion, multi-time British Columbia provincial titlist and Olympian, had a number of experts testify that he had the potential to be another Muhammad Ali had his career continued.

Considering Day’s struggles in MMA before his accident, a settlement on the level of Albert’s was unlikely. However, Cameron believed that Day possessed plenty of earnings potential, and that the sudden loss of a career and passion was significant. He was right.

Day was eventually awarded $325,000 for pain and suffering and $50,000 for loss of earning capacity. The latter figure represents what the jury deemed appropriate based on Day’s ability to make a living fighting had the accident not occurred. A 10 percent reduction based on Day’s fault in the accident left the settlement in the neighborhood of $340,000.

“The actual earnings loss was $50,000, which I think was [based on] the fact the jury accepted the...chance of him having to fight his way back to the UFC and become a top contender to make a lot of money -- the chance of that possibility was a little low,” Cameron said. “But they certainly recognized that he had some chance.

“That’s why the jury gave the most money under pain and suffering, because anybody who’s at that level has a shot. If he had gotten run over by a car right after he beat Belcher, for example, you can imagine what the jury would have thought of that.”

Still, it’s not difficult to imagine Day putting a few wins together and getting another shot in the sport’s current climate, where the UFC holds cards on a near-weekly basis. Stories of fighters hitting a hot streak on the regional circuit and stepping in as a short-notice injury replacement are the norm these days.

In fact, that was how Day got his start in the Octagon. It was Patrick Cote who was supposed to face Belcher at UFC 82. When “The Predator” injured his knee, an opportunistic Day took his place.

“It [the trial] was definitely nerve-wracking, very stressful,” Day said. “It brought up a lot of past emotions. I didn’t realize it really would, reliving the ups and downs of my career.

Perhaps most interesting of all the expert testimony were the statistical examples provided by FightMetric.com director Rami Genauer. The FightMetric analysis hinged on four key pieces of data:

•Since 2007, there were 44 fighters who fought more than once in the UFC, were later released and eventually invited back. Six of those fighters, like Day, were Canadian middleweights: Cote, Jason MacDonald, Ivan Salaverry, Joe Doerksen and David Loiseau.

•160 fighters made their UFC debuts between April 2007 and April 2009; 129 of those fighters were released at some point in time, with 17 of those 129 eventually returning to the Octagon. Additionally, of the 160 UFC debutantes from the time period, 88 are still competing somewhere today.

•The UFC held 20 events in 2008, with 219 fighters competing under the promotion’s banner that year. In the past 12 months, the UFC has held 42 events and employed 522 fighters.

•On the whole, Canadian fighters released by the UFC on average fought more frequently than other fighters released from the promotion; 63 percent of fights that Canadian UFC veterans took in Canada after their release were main events.

While not all of those figures were an obvious slam dunk for Cameron and Day, they did serve to drive home a basic point: a return to the UFC was far from impossible for someone with Day’s background. And even if it wasn’t in the cards, he probably would have had other options.

“The lawyers for the ICBC didn’t have one person that could come in and say my career was over, that it [would have] been done,” Day said.

According to Cameron, the $325,000 pain and suffering assessment Day received is near Canada’s max amount of $365,000, which is normally given to those suffering catastrophic injuries such as losing a limb. Because the amount was so high, the possibility exists that the ICBC will appeal that portion of the settlement. Cameron is confident that the amount will hold.

“I think it can because it’s particular to that person. It’s like a concert pianist getting their fingers all broken, and they can’t play anymore,” he said.

At any rate, the settlement says something about the value of a professional fighter’s career. While earning capacities differ depending on the athlete and the situation, the loss of said potential can be damaging on a number of levels.

“I think the fact that he got this award signifies that people on that jury respect that MMA fighting is a legitimate sports passion, and losing it means something,” Cameron said. “If Jason had been an active UFC fighter and doing well [at the time of the accident], I think the award could have been huge.”

As for Day, he has gradually loosened MMA’s steel grip on his heart and mind in an attempt to move on with his life. He is currently doing stunt work in Vancouver while honing his acting skills. A longer fighting career might have enhanced his film prospects. It also might have not. There’s no time to think about that now.

“With stunt work, there’s definitely times when it does hurt, but I’ve been lucky that I’ve been able to do stunts that haven’t affected my injuries too bad,” Day said. “That’s why I think acting is a good career path for me because i don’t know how long my body will hold out doing stunts.

“Hopefully for a long time.”