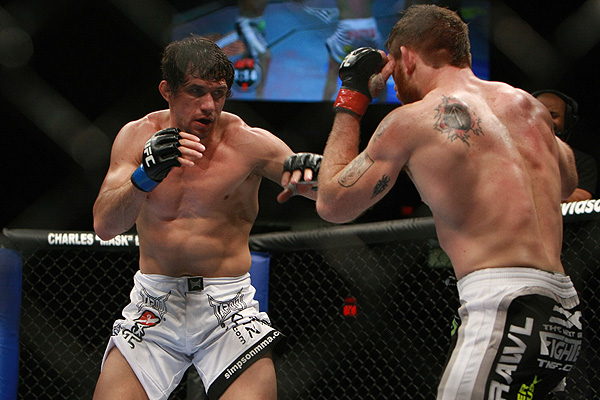 Aaron Simpson will begin life after the UFC against Josh Burkman on March 23 at World Series of Fighting 2. The undercard streams live and free on Sherdog.com.

Ahead of the bout, he joined the Sherdog Radio Network’s “Cheap Seats” show to discuss his opponent, WSOF and more.

On Burkman: “Josh is seasoned. He’s been in the game for a long time. He’s got some great wins and he’s well rounded. I think maybe the most intriguing thing about the fight is in a lot of my fights, I’ve looked to exploit weaknesses and I don’t really see a weakness with Josh Burkman. It’s an interesting fight for me.”

On WSOF: “I think what the World Series of Fighting is doing is big. Think of the names that are coming in. I think it’s the biggest talk right now in MMA besides obviously the UFC and their cards. They’re the new biggest thing, and the names they’re bringing in is exciting.”

On WSOF signing Fitch: “That is a big thing for me. Jon and I were supposed to fight in the UFC, and he pulled out with an injury. It’s kind of a long time coming in a way. We’ll see. I’ve got a guy to fight right now, but it’s definitely nice to know that the World Series is moving in the right direction and they want to be a competitor. They’re doing the right things to get themselves out there and bringing the right people in and surrounding themselves with the right fighters. I’m excited.”

On dropping to 170 pounds: “I should have done this from the beginning. Things happen for a reason, and I met George Lockhart for a reason, to get this weight off, and be able to get down to 170, but I should have done it from the beginning. That being said, I’ve fought a lot of big dudes. It seems like everybody I fought in the UFC were 205 pounders at one time, dropping down, and I was a small 185. I had some success, a fair amount of success there. Guys like Mark Munoz, I felt like it could have went either way. Guy like Ronny Markes, who had almost 30 pounds on me, I feel could have gone either way. That being said, I’m at the perfect weight now and I’m excited to be where I am at 170.

On getting cut from the UFC: “It kind of threw me for a little bit that we had to do the contract deal with the UFC because I feel I can still beat anybody in the world at welterweight. I’m fast enough, I’m strong enough. I’m not moving old and rickety. When I get out there, I’m pretty fluid with everything I’m doing.”

Listen to the full interview (beginning at 28:41).