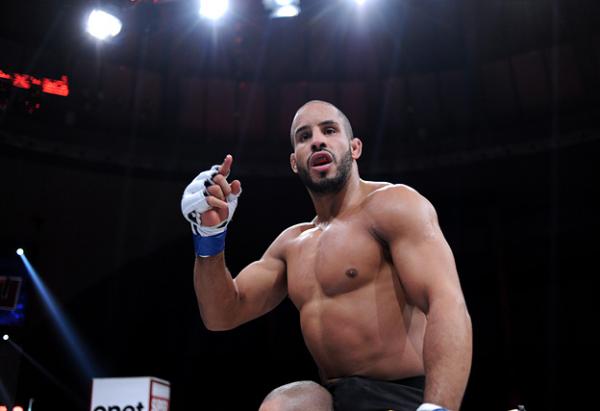 Azaitar threw his entire arsenal with ill-intent in the abbreviated middleweight bout. After a spirited exchange between the two combatants, the Jupps Fight Team representative sent Marshman tumbling to the canvas with a pair of big left hands. Azaitar quickly pounced on his dazed foe and landed about five unanswered hammerfists before referee Marc Goddard intervened on Marshman’s behalf. It was the sixth first-round stoppage of Azaitar’s 11-fight professional tenure.

Marat Pekov would not be denied in the evening’s co-main event. The Russian was persistent in his pursuit of the armbar, submitting John Cullen with the maneuver at the 3:45 mark of round one in their bantamweight clash. With the win, Pekov earned his first victory in three tries under the CWFC banner.

Moments before the finish, Cullen was able to successfully fend off Pekov’s initial armbar attempt. However, the Glasgow native left himself vulnerable in the process of landing ground-and-pound from above, allowing Pekov to go back to the well once more. This time, Pekov was able to spin Cullen to his back, and after gradually breaking his foe’s grip, achieve full extension on the hold to earn the tapout.

After two competitive rounds, the light heavyweight clash between Malik Merad and Mohamed Ali ended in bizarre fashion when Ali verbally submitted before a punch was thrown in the final period. The Egyptian asked out of the fight just nine seconds into round three.

The first two rounds featured plenty of back-and-forth action. Ali attempted to impose his will through heavy ground-and-pound from above, while Merad answered with sweeps and submission attempts. Momentum appeared to be shifting toward Merad in round two, however, as he spent the latter portion of the frame landing strikes from full mount. It was unclear why Ali elected not to continue.

Superior boxing, hard leg kicks and timely takedowns carried Norman Paraisy to a unanimous verdict over Allan Love at middleweight. All three judges scored the bout 30-27 in favor of the Frenchman.

Paraisy found success with his jab and left hook throughout the bout, keeping his Scottish opponent off balance with consistent feints and head movement. The Paris native often punctuated his punching combinations with leg kicks, which appeared to take their toll on Love as the fight progressed. Love’s most significant moment came late, as he threatened with an armbar and a triangle choke in the bout’s waning seconds, but Paraisy survived to secure the victory.

Marcin Lasota proved himself to be resourceful in the face of heavy fire, as he submitted Paul Marin with a first-round armbar at flyweight. The end came 3:02 into the frame when Losato transitioned from a triangle choke attempt after his adversary attempted to slam his way out of the hold. Lasota was able to ensnare Marin while Spaniard attempted to drop powerful ground-and-pound from top position moments earlier. Although Marin disputed the submission, replays clearly showed that he briefly tapped as Lasota transitioned to the armbar.

In preliminary action, Dave Hill submitted Miguel Haro with a guillotine choke at the 2:11 mark of round two in a featherweight clash, and Yazan Janeb dispatched Hicham Laghzali via technical knockout 2:57 into the third round at middleweight.