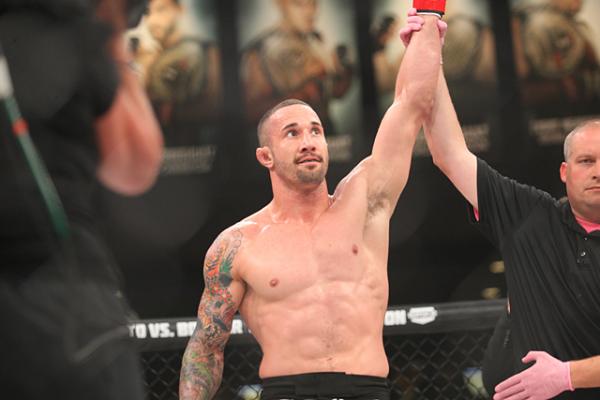 Sam Oropeza wants a shot in the UFC. | Dave Mandel/Sherdog.com


The Ultimate Fighting Championship is generally considered to be the premier mixed martial arts promotion in the world, with Bellator MMA not far behind. But for Sam Oropeza, the first step in his route to the UFC was to ask for his release from the Scott Coker-led promotion.

The 29-year-old middleweight has competed five times under the Bellator banner and is currently riding a seven-fight win streak. Of his 12 career wins, none have reached the judges’ scorecards. With such a record, it would only make sense that Oropeza would factor heavily into a Bellator division currently ruled by Brandon Halsey in 2015.

“I believe Bellator has treated me well, so I don’t want to seem like I’m disgruntled or anything like that. I just feel as though they are going in a different direction by not doing the events every week like they used to and that they are going in a different direction in the types of fighters they want to promote,” Oropeza told Sherdog.com. “I just want the big fights, the big opportunities and I didn’t know if they were willing to give me what I want. I don’t blame them. They have to do what they have to do; they are a business and the fight game is a tough game.”

Does the rationale make sense? Oropeza is leaving a promotion that is backed by Viacom, televised on Spike TV and has been seemingly righting wrongs from its past to headline Global Proving Ground: “Fighters Against Dog Fighting” against Timothy Woods. To hear “Sammy O” explain it, the reasoning is not too farfetched.

“There have been a lot of fighters lately who are based on the East Coast that fight in promotions like Ring of Combat and Cage Fury who have been winning fights and then getting signed by the UFC,” said Oropeza, whose fight against Woods can be viewed on GFL.tv on Jan. 17. “We get short experience in this thing called life, and I’m trying to get the most out of it.”

For the Philadelphia Fight Factory product, the realization came prior to his victory over Gary Tapusoa at Bellator 130, a bout that was streamed on Spike.com. It’s not that Oropeza has an issue with fighting on the preliminary portion of a card, because stars such as Urijah Faber and Dominick Cruz have done quite well for themselves on UFC undercards recently.

“My last fight for Bellator was on the undercard, and I remember looking at myself in the mirror and thinking, ‘You have the talent. You have the talent to be something big and shouldn’t be fighting on the undercard,’ so I went out there and won and now I’m making it happen,” Oropeza said. “Fighting on a UFC undercard is very different. You’re going to be on Fox Sports 1. You’re going to be on live, free television that everyone is watching and getting tons of exposure.”

Another driving force behind his decision to try and reach the UFC is the lure of $50,000 post-fight bonuses. With his affinity for finishing scraps, Oropeza figures it would only be a matter of time before he took home such an award.

“I grew up poor, like real poor,” Oropeza said. “Knowing that there is an opportunity out there in the Octagon -- that if you win this fight so spectacularly there will be $50,000 waiting for you -- it could definitely change the direction of my life.

“I feel almost like I’m asking Joe Silva, Dana White, Lorenzo Fertitta: ‘What do I have to do to provide you with that undeniable proof that Sam Oropeza deserves a UFC contract?’ It’s something that I think about every day,” Oropeza continued. “What I want to do is show them that I am a complete fighter, and I am a force whenever I step inside the cage.”

At this stage in his MMA career and with a baby due in April, Oropeza’s internal clock is ticking. A conversation with his manager was integral in ultimately deciding it was time to start fresh on the regional circuit.

“I talked to my manager and we discussed the potentiality that Bellator isn’t going to offer me a big fight for the next three or four years. What happens to my window of opportunity then? Sometimes in life you need to roll the dice,” said the 29-year-old Oropeza. “I’ve seen these guys getting signed by the UFC and I have sparred against them or trained with them. If I get that opportunity, I will show that I belong there.

“I really believe that the UFC is looking at me, knows who I am and sooner than later my number is going to get called,” he added. “I am staying ready. These local shows are cool, but I don’t get paid that much to do it. Being compensated on a higher scale will mean the world to me.”

When asked about Bellator’s change of leadership in 2014, Oropeza draws from his experience with Scott Coker during a one-fight stint for Strikeforce in 2011 but still admits to not knowing all that much about him. Overall, Oropeza preferred the philosophy of the promotion’s former leader, Bjorn Rebney.

“I fought for Strikeforce back in 2011 and Scott was at the weigh-ins for my last Bellator fight,” Oropeza said. “I’ve stood next to him. Scott Coker is a very quiet, plain guy -- not knocking him," Oropeza said. "I always thought Bjorn Rebney was really cool. He spoke to me, and I thought that was cool. With Bjorn I got the feeling Bellator wanted to create a homegrown star and not look for free agents in other organizations. That’s why I liked Bjorn because I felt like he was out for the little guy.”

In the end, Oropeza feels as if he is doing what’s best for his career and for his growing family. There is no time like the present and the first obstacle comes in the form of Woods, a Maryland native whose last bout also came under the Bellator banner.

“I’d rather put myself out there and dream big and go after the top company, which is the UFC,” Oropeza said.