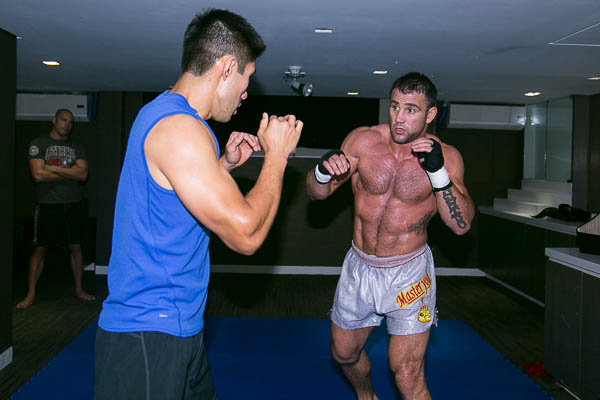 Phil Baroni has made a remarkable recovery from a nasty ankle injury. | Taro Irei/Sherdog.com


It has been more than a year since Phil Baroni suffered a gruesomel ankle injury in a loss to Nobutatsu Suzuki at One FC 9.

“The New York Bad Ass” vowed then that it would not be the end. He wasn’t going out like that, no matter how grim the prognosis might be. A broken fibula and a dislocated ankle that required eight screws for stabilization weren’t going to stop the Long Island, N.Y., native, even as he turned 38 earlier this year.

It wasn’t easy, and there were a few setbacks along the way, but Baroni will return to the cage against Karo Parisyan in a Spike TV-televised main card bout at Bellator 122 on Friday night. Many thought he was done when he crumpled to the canvas in the Philippines last May. Baroni knew otherwise.

“I love this s--t. I love it,” Baroni told Sherdog.com. “I was destroyed and didn’t know what to do with myself when everybody told me it was over.”

If everything had worked out, Baroni would have been back even sooner. His original plan was to compete at Bellator 118 in Atlantic City, N.J., but the recovery process had not quite run its course. Ultimately, Baroni took a cue from a peer who knows a little something about lengthy injury rehabilitation.

“I was supposed to get ready for a fight in Atlantic City, and I herniated some discs in my back, probably because of the ankle and not having the flexibility when I was trying to rebuild my legs. After that I was getting ready to fight in One FC; I had another little injury....but everything’s good now. I was trying really hard to get ready fast and make some money because I was out of money,” he said.

“I listened to an interview with Dominick Cruz, and his take on it all made sense: You can’t get better, heal and be in fight camp at the same time. You have to get better and then begin fight camp,” Baroni continued. “I was trying to do both at once. To be honest, I was out of money, my wife had to drop out of nursing school full time and go part time so I could just train and do my rehab.”

Once he was fully healed, camp went well. Now Baroni is paired with a fellow UFC veteran in Parisyan, another fighter who has authored his share of memorable moments over the years. Both Baroni and Parisyan are looking to recapture some of their past glory, and while neither man has produced the most sparkling record of late, it’s the type of fight that can still draw eyes to the Bellator cage.

Baroni concurs, noting that he has paid his dues and deserves any recognition he might get.

“I’m always the main attraction when I fight,” he said. “I don’t have that feeling, I f----ing know it. I don’t even know who the other guys [on the card] are. I’m not disrespecting them, but they haven’t paid their dues like me and Karo Parisyan have. I don’t care who they are or where they’ve fought -- they haven’t.”

Bellator 122 features a pair of tournament finals, as Brett Cooper meets Brandon Halsey at middleweight while Andrey Koreshkov squares off with Adam McDonough at 170 pounds. Fighters like that might help give Bellator a strong foundation of homegrown talent, but that doesn’t matter to Baroni.

“Any card I’m put on, I wouldn’t worry about who else was on the card. I don’t give a f--k. In my mind, I’m always the main attraction,” he said.

Parisyan is an opponent who Baroni considers to be a friend. They’ve dined together, trained together and share a mutual respect. With that said, Baroni still needs to make ends meet.

“I like him a lot, but when the bell rings, I’m gonna take it to him. He’s standing in the way of all my dreams, of everything I’ve worked hard for my entire career,” he said.

How much longer that career lasts remains uncertain. Baroni’s Bellator contract is North-American exclusive, which means he can still compete for One FC as well. That leaves the door open for a potential bout with Ben Askren, the former Bellator champ who now resides in the Singapore-based organization.

Baroni and Askren have gone at it via social media in the past, and the New Yorker said he felt disrespected by some of Askren’s comments on Twitter.

No matter what the future holds, Baroni doesn’t plan on walking away anytime soon. Not when it felt like the sport he loved was going to be taken away from him a year ago.

“I feel great, I’m having fun and I’m getting better. My skills aren’t deteriorating. I still punch hard; I’m still fast,” Baroni said. “I’m gonna do it until I can’t do it.”