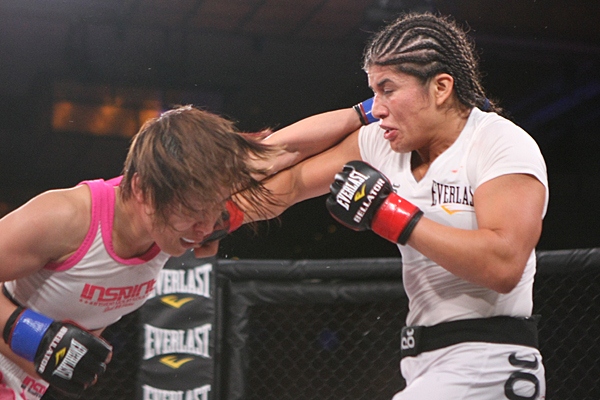 Jessica Aguilar was thrilled to defeat Megumi Fujii in a battle of top 115-pound fighters at Bellator Fighting Championships 69, but the American Top Team representative believes she still has room to improve.

In an interview with the Sherdog Radio Network’s “Beatdown” show, Aguilar discussed how she can get better, beating Fujii and more.

On the win over Fujii: “This fight means the world to me. It was my goal from the beginning when I got into this sport to become the best, and here I am today.”

On the game plan against Fujii: “I was trying to keep it standing to frustrate her as much as possible, and when she went to the ground, defend and ground-and-pound and even try submissions.”

On what she was thinking after losing both contacts in the second round: “I’m squinting my eyes a little more. I can’t see. Obviously my corner knows, but I’m thinking, ‘Oh my gosh.’ There’s different things going through your mind, but once I was close to Megumi, I could see what was going on. … I could see her when I was close to her, but from far away, I couldn’t see her across the cage.”

On the unanimous decision: “My trainer talked about me winning, I think, the first and the second and losing the third round. I did watch the fight actually yesterday. That’s what I thought it looked like as well. I won the first two rounds and lost the third round. … As a fighter, I think of the damage I’m giving and what I’m taking. I wasn’t getting a lot, but every hit I would land on her, it was causing damage. It was connecting.”

On why she boxes but doesn’t kick often: “There’s a lot of things that I need to improve on still and that I’m still working on. … Every time I’m training, it’s for specific fights. There’s no time [for] kind of putting aside some time and just training kicks, kicks, kicks. I would absolutely love to learn how to get better with my kicks.”

On whether she’d give Fujii a rematch: “Just as long as I have work, I’m blessed. Whoever they offer me, and if they make sense and if it’s a good opportunity, I’ll take it. They’ve done a great job. They’ve brought only the best together inside of the Bellator cage at 115 pounds. I’m sure that they’re going to continue doing that. I don’t have any target on anyone.”

On her loss to Zoila Gurgel: “I should have finished the fight. It happened. Whatever happened, happened, and I’ve moved on from that. If a rematch ever comes in the future -- anything that happens in the future and makes sense, then I’ll take it.”

On Ronda Rousey being a flag-bearer for women’s MMA: “I think she deserves it. She’s done her part. She’s a great athlete. She has her skills. She’s doing awesome with everything she’s doing. Congratulations to her. It only helps all of us.”

On being the top 115-pound fighter: “That’s who I am, I think. I kind of still don’t believe it, but you know what? It’s true. I am now the number one female fighter in my weight class and I’m proud of saying that. It’s been a hard six years. I came a long way. A lot of training, a lot of up and downs, but here I am today, enjoying it. Now I’m riding the high.”