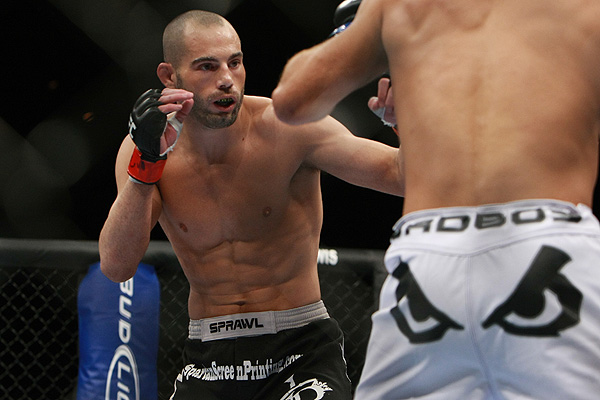 Mike Swick waited two and a half years to make his UFC return, and after knocking out DaMarques Johnson at UFC on Fox 4, he wants to get back in the cage much quicker this time.

“I just had to get a little ring rust out and get back into the rhythm,” Swick told the Sherdog Radio Network’s “It’s Time” show with Bruce Buffer. “That’s what I’m trying to do now is get these fights and get back in there.”

Swick had not fought since Feb. 6, 2010, due to a variety of ailments, including a knee injury and an esophageal condition. At times it wasn’t clear if he’d ever fight again.

“I never gave up,” Swick said. “I definitely thought that there’s a chance it might not happen, that the body wouldn’t hold up or I wasn’t going to be able to make that return, but I also pushed for it as if it was possible and just hoped and worked hard. Each day I got better and better. I did a lot of research and figured out the diet, and once I got that, I felt great. Then I knew I was coming back.”

Johnson, who was a finalist on Season 9 of “The Ultimate Fighter,” gave Swick some serious trouble in the first round. At one point he had Swick mounted and was landing elbows, but in the second Swick caught a kick and knocked him out with a perfectly timed right hand.

“He definitely showed up,” Swick said. “He took some hard shots right in the beginning, those first two hard punches, and he was totally game. It was great. That’s the fight I wanted. I wanted to get in there and mix it up and have a go like that to kind of get me back in the rhythm. That was exactly what I wanted.”

Now Swick’s looking to get right back in the cage again, but first he plans on having the scar tissue in his knee cleaned up. It will be a quick procedure and has already been scheduled.

“I should be back doing cardio and training like maybe a week after,” Swick said. “It’s just a small sidetrack, and then hopefully I can get a fight soon. I want to get back in there.”

Listen to the full interview (beginning at 25:45).