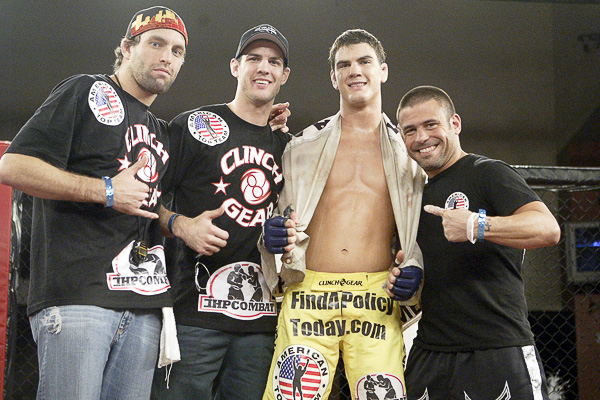 He has won six of his last seven fights and is on the verge of becoming a champion in one of top promotions outside of the Zuffa umbrella, but Micah Miller is best known for neither of those things.

Miller entered the 14th season of “The Ultimate Fighter” with the requisite swagger and pedigree befitting one of the favorites to emerge from the reality show with a coveted six-figure UFC contract.

“Even though I don’t know who my opponent is, he knows who I am, and he knows he’s screwed,” the younger brother of 11-time UFC veteran Cole Miller stated prior to facing the lightly-regarded Steven Siler in the season’s opening episode.

The outcome appeared to be such a foregone conclusion that UFC President Dana White crossed Siler’s name off his list of fighters before the bout even began. Someone forgot to alert Siler that Miller’s entry into the “TUF” house was preordained, however, and the California native shocked everyone in the building -- and those watching at home -- by submitting Miller with a guillotine choke early in the third round.

Now many months removed from his “TUF 14” defeat, the man known as “Maverick” has an explanation for his subpar performance.

“I had a stomach illness going into the fight. People might talk s--t about me for even saying this, but I fought the biggest fight of my life half dead,” Miller told Sherdog.com. “That’s why I looked so terrible; I think it’s pretty evident if you watch the fight. I didn’t even really have to cut any weight because I was so on and in great shape [leading up to the bout]. The night before the fight at weigh-ins I ate some food, and it didn’t agree with me.

“It made me puke for hours. It was tough to be able to compete when all the water that you’ve taken in to rehydrate, you’ve thrown it back up into a toilet,” he continued. “I definitely want that fight back, somewhere down the road.”

On Friday, the American Top Team product gets the opportunity to rebound from that defeat when he challenges Tachi Palace featherweight king Georgi Karakhanyan at TPF 12 "Second Coming" at the Tachi Palace Hotel and Casino in Lemoore, Calif.

Vying for championship gold under the Tachi Palace banner offers Miller a chance at another type of redemption. On Dec. 2, 2010, he defeated then-145-pound champion Isaac DeJesus at TPF 7 with a neck crank submission in the opening frame -- and walked away empty handed. As Miller had failed to make weight the day before, the fight was not for the belt.

The World Extreme Cagefighting veteran asserts that travel and dietary issues affected his ability to make his contracted weight.

“The flight to get into Fresno (Calif.) from Fort Lauderdale (Fla.) is a tough day of travel, a lot of connections,” he said. “I had a genius idea that I wasn’t going to fall asleep, and I had this whole plan. Nothing I did worked. I ate some airport food that I probably shouldn’t have. I’m usually pretty good and in tune with my body. I just lost track of that sync, and I came in heavy.”

Given the recent course of events, Miller is grateful to occupy his current position.

Miller has already taken steps to remedy the issues that plagued him during his last journey to the west coast, arriving in California to stay with Nick and Nate Diaz nearly a week before his fight.

“It’s been more comfortable,” he admits.

Miller still possesses the confidence he flashed before his upset loss to Siler, and his track record backs it up, with 17 victories in 22 professional bouts. Unbeaten in two fights with Tachi Palace, he has finished 14 of his triumphs by knockout or submission, and his four official losses have come to a quartet of accomplished veterans in Cub Swanson, Josh Grispi, Yoshiro Maeda and Michihiro Omigawa.

“I’m coming to the Tachi Palace [Fights], and so far I’ve been the man here. And nobody that I’ve fought here has shown me that I’m not,” Miller said. “I’m fighting a tougher guy for the title now than I did last time. I do feel pretty confident because I’ve done some good work here, and I want to do some more.”

Karakhanyan owns a solid resume himself. A veteran of two Bellator featherweight tournaments, he has notched three straight victories since leaving the Chicago-based promotion, most recently besting DeJesus to acquire the featherweight strap in December. The Millennia MMA representative has earned 11 of his 17 wins by submission.

“I think we’re both well-rounded, and it should be pretty exciting for the fans. I think they’re gonna see a lot of different positions and a lot of different transitions,” Miller said. “I don’t see any real holes in his game on his feet or on the ground.”

Siler turned out to be pretty good, too. The man who handed Miller a disappointing loss pulled off another upset last week, beating brother Cole via unanimous decision at UFC on FX 2 in Sydney.

“Oh yeah, I was surprised,” Miller said of his older brother’s defeat to Siler. “I thought Cole was gonna be able to land some better strikes. He landed some really clean punches -- he just didn’t throw enough of them. He let Siler throw too many of the punches and take control of the way the pace was going. I thought [Siler] won the first two rounds, so hat’s off to the guy.”

Miller, who was fighting in the WEC a few months before his brother debuted in the Octagon, would eventually like to join his sibling in the UFC featherweight ranks.

“Everybody wants to fight in the UFC. It’s the highest level; it’s where you make the most money. It’s a spot now I feel I deserve,” Miller said. “I feel I would’ve made waves on the show had it not been for the unfortunate incident. I plan on going out and showing people that I’m a UFC fighter. I’ve been training like a world class fighter for a long time, and I finally feel I’ve grown into one. It’s time for me to start getting paid like one.”