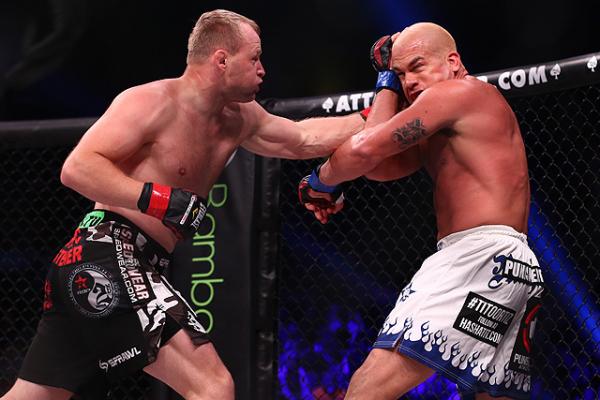 Alexander Shlemenko has learned from his loss to Tito Ortiz. | Dave Mandel/Sherdog.com


You can excuse the average mixed martial arts fan for taking a sneak peek into the future in anticipation of what might be in the Bellator middleweight division.

After all, that future could very well include a potentially tantalizing 185-pound title tilt between Alexander Shlemenko and Melvin Manhoef. For those scoring at home, that’s a combined 56 knockout victories and countless highlight reel finishes between the two fighters. It would be understandable if more than a few armchair matchmakers had already booked the bout.

However, Shlemenko himself has yet to consider the possibility. He already learned the cost of taking an opponent too lightly last May.

At Bellator's inaugural pay-per-view event, Shlemenko moved up a weight class to challenge former UFC light heavyweight king Tito Ortiz. The Russian was a solid favorite heading into the bout, and Ortiz had not fought since July 7, 2012. The former “Huntington Beach Bad Boy” had already withdrawn from a proposed bout against Quinton Jackson in 2013 due to a neck injury.

In short, it looked like easy money for the man known as “Storm.” Instead, Ortiz took the middleweight titlist down in approximately two minutes and shortly thereafter secured a fight-ending arm-triangle choke.

Prior to that, Ortiz had won just one of his previous nine fights. Suddenly, the controversial light heavyweight was back and announcing his presence to the world with a poor man’s impression of Hulk Hogan inside the Bellator cage.

Consider it a lesson learned for Shlemenko.

With that in mind, there is no way Shlemenko is looking past Brandon Halsey, Bellator’s Season 10 middleweight tournament winner. Shlemenko and Halsey will square off in the Bellator 126 headliner at Grand Canyon University Arena in Phoenix on Friday night.

Halsey is a former NCAA All-American wrestler at Cal-State Bakersfield University and has compiled a 5-0 record in the Bellator cage since his promotional debut in March 2013. Considering the struggles he experienced when he was taken to the ground by Ortiz, Shlemenko is well aware of where his advantage lies.

“Standup is not Brandon’s strongest area,” Shlemenko said. “That is the reason why he always tries to take his opponents down, because that’s where he feels strong; he feels confident. There are a lot of holes in his standup game that I would be able to capitalize on.”

In addition, the 30-year-old champion has a significant experience edge. He has 58 professional fights on his resume since turning pro in 2004, while Halsey has just seven bouts total under his belt. According to Shlemenko, that means he will have more options come fight night.

“I think the difference in level of experience is that if you have a lot of experience, you are able to reach to Plan B or to Plan C during the fight if something goes wrong,” he said. “That’s what experience gives you.”

Not that Shlemenko expects anything to go wrong.

“I am going to try to keep it standing and finish him standing,” he said. “I really want the fight to end the way it should: He’ll be knocked out cold, and I’ll be the winner.”

Shlemenko doesn’t rule out venturing outside the division again sometime in the future. However, he wouldn’t do it for just anyone -- it would have to be a matchup similar to the magnitude of the Ortiz fight.

“When I fought Tito Ortiz, it was not that I had a goal to fight at 205. I just really wanted to fight Tito,” he said. “So it would depend on the opponent. If a very interesting opponent would come up and it would be out of my weight class, yes, I would consider fighting in a different weight class.”

Such a possibility, as well as a future showdown with Manhoef, are purely hypothetical at this point. If Shlemenko can retain his belt against Halsey, then he will allow himself to contemplate what the future might hold.