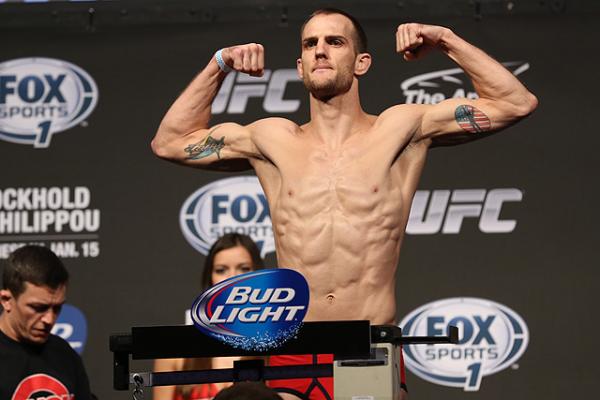 Cole Miller knows he won’t be getting a matchup against rival Donald Cerrone anytime soon. He would like a bout against a top-10 opponent, though.

“I know that my skill set is top 10,” Miller told the Sherdog Radio Network’s “Beatdown” show. “I know that I’m a top-10 contender with my striking and with my grappling. It’s just about mixing it together in the cage on fight day and piecing it together.”

Miller showed a variety of skills in his Jan. 15 win over Sam Sicilia at UFC Fight Night 35. After dropping his opponent with a combination, Miller secured a rear-naked choke 1:54 into the second round. It was his third win in four fights, and also gave him the opportunity to call out Cerrone.

“It just seems like this past year, 2013, and now starting 2014, things are finally starting to click for me and I wanted that to be known,” Miller said. “If you just sit there and you be quiet and you don’t speak up, then who’s going to know?”

Cerrone was in action Saturday, knocking out Adriano Martins in a lightweight bout at UFC on Fox 10. Miller, however, competes at 145, and at this point it looks like Cerrone will be staying in the heavier division.

“I saw where he said he was considering dropping down to 145,” Miller said. “It’s not like I just called out some dude in a weight class that’s not in mine. He was the one that brought it up, so I was like, oh, that’s a fight. That’s a little bit of a personal beef, I guess you could say, that’s been going on for quite some time. I’ve made the statement that before my day is done in this world, we’re going to throw down. It may or may not happen in the UFC. It doesn’t look like it’s going to happen now, and honestly, I didn’t even know he had a fight coming up this weekend when I made that statement.”

With Cerrone off the board, Miller wants a matchup with any ranked featherweight outside of teammates Nik Lentz and Dustin Poirier. In the meantime, though, he’ll be resting the hand he broke against Sicilia.

“February 6 is my next appointment,” Miller said. “We’re going to take [the cast] off and re-X-ray it, and hopefully it will all start healing back into one piece. If it’s looking like this is not going to come together, then we might have to put a pin or a plate in it, but hopefully it’ll be coming back into one piece and I can get this cast off and put some sort of splint on and take a normal shower like a normal person and do some physical therapy. That would be phenomenal.”