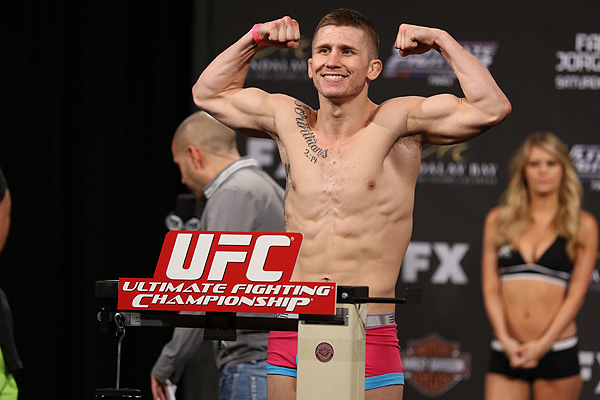 
Justin Lawrence was one of the most intriguing prospects to emerge from “The Ultimate Fighter 15,” a precocious talent with more than 150 amateur kickboxing victories and a flamboyant style in the cage.

While Lawrence didn’t win that particular iteration of the long-running reality series, victories over James Krause and Cristiano Marcello on the show hinted at his considerable potential. The Missouri native continued to deliver at the “TUF 15” finale, knocking out John Cofer with a spectacular right high kick 19 seconds into the third round.

Lawrence’s future appeared to be bright, but he was bounced from the UFC just two fights later following consecutive losses to Max Holloway and Daniel Pineda. As it turned out, the victory over Cofer took a far greater toll than anyone initially knew.

The same kick that earned Lawrence $80,000 in bonus money continues to affect him even today. Although the 25-year-old fractured his foot when he connected with the kick that put Cofer away, that didn’t prevent him from accepting a fight with Holloway some two months later.

“I was immature to the sport, and I was kind of young so I was like, ‘Sure why not? Let’s do it,’” Lawrence told Sherdog.com. “I took the fight when I probably shouldn’t have just because I wasn’t healed up yet. Still to this day my foot hurts me. I took the fight anyway because I’m a warrior, and I don’t turn down fights. Now that I’m more mature and I’ve been in the game a little longer, I probably wouldn’t have taken the fight.”

In addition to the fracture that hindered his performance in losses to Holloway and Pineda, Lawrence said he suffered permanent ligament damage in his right foot. The pain that will occasionally surface during training serves as a reminder of the drawbacks of the warrior’s mentality.

“I see these guys when they get nicked up and not taking fights, not fighting for years,” Lawrence said “I see those guys not taking fights unless they really have to. I got two bonuses that night. I was fine on the money; I didn’t really need to take the fight. I just wanted to because it’s hard for me to turn down a fight.”

In hindsight, Lawrence admits that he had some room to grow mentally, especially after the setback against Holloway – the first of his professional career – threw him into a funk. When he returned to the cage against Pineda at the “TUF 17” finale, his mind was far from where he needed it to be.

It wasn’t until after Lawrence was cut and he relocated to train at Alliance MMA in San Diego that he began to find himself again.

“At the level that we’re at, everyone knows how to fight, everyone’s in good shape because it’s their job. It’s just really how to deal with everything mentally,” Lawrence said. “That’s the biggest thing. That’s the difference between a UFC champion or a Bellator world champion is how they deal with things mentally. Being under [teammates] Dominick Cruz and Michael Chandler and having those guys in my back pocket to ask any question I want to [has] been great.”

The maturation process continued in Resurrection Fighting Alliance, where Lawrence won three straight bouts and captured the promotion’s 145-pound title. Shortly thereafter, Bellator came calling. Lawrence will make his debut for Scott Coker-led organization on Friday night against 59-fight veteran Sean Wilson on the preliminary card at Bellator 138. While “The American Kid” initially hoped to get another chance in the Octagon, it turned out that Bellator was the better fit.

“They really wanted me. They put a good offer on the table. I was still kind of holding out to see if the UFC would hit me up. Bellator came out with a better contract and a better deal,” he said. “I was kind of shunned away, and I was kind of scared of the whole Reebok deal. At that point time I wasn’t really sure how it was going to pan out. I just made a good move going with Bellator.”

In a sense, things have come full circle for Lawrence, who at 20 years old made his professional debut in Strikeforce when Coker was at the helm. Lawrence would defeat Max Martyniouk via technical decision that night, but his Strikeforce debut was nothing more than a one-time deal.

“At the time I felt like, ‘Hey give me a contract; I just put on a good fight against a tough dude.’ I still hadn’t really proved anything,” he said. “In the fight game you have to prove yourself every time. I’m guessing Scott Coker knows my name. That’s a good feeling to be back on that team.”

Now that he has a fresh start in a major organization, Lawrence plans on making the most of his opportunity. He recognizes that his coming out party against Cofer is but a distant memory in the minds of most MMA fans. Now, he has to produce some new material.

“MMA fans are the hardest fans to be good with. If you lose a fight they don’t really like you very much. If you win a fight they’re all over you,” Lawrence said. “The fans are everything in this sport. They’re the reason why you go out there and do what you love.

“…I love my fans and I love putting on good shows for everything, showing that I’m a unique fighter,” he added. “I just want to be dominating and have people be like, ‘Wow, he really has matured since The Ultimate Fighter.’”