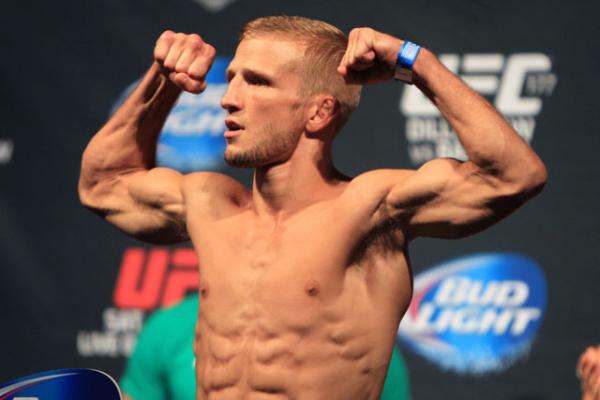 
Don’t ask T.J. Dillashaw who he wants to fight next. Considering the chain of events that went down over the past two days, who can blame the bantamweight champion if he needs a mental vacation?

Right up until Friday afternoon, Dillashaw was ready to face Renan Barao in a rematch of their bantamweight title bout at UFC 173, which the Team Alpha Male representative won via technical knockout in the fifth round. Unfortunately, all that preparation went down the drain when a bad weight cut sent Barao to the hospital and knocked the Brazilian out of the UFC 177 headliner.

Enter Joe Soto, who took the fight on 24 hours’ notice and put up a valiant effort before falling to Dillashaw via TKO in the fifth round at Sleep Train Arena in Sacramento, Calif., on Saturday night.

“I knew Joe Soto was a tough fighter,” Dillashaw said at the post-fight press conference. “I’ve practiced with him; eight to 10 weeks ago he came into our room and practiced with us. I knew he was a tough wrestler, great grappler. He’s been around and had some great fights. To switch my opponent at the last minute like that, it was a real stressful situation that I just had to man up and do.”

“I don’t think that anybody had more pressure on us this weekend than Dillashaw did,” said UFC President Dana White.

A right head kick followed by a straight left hand put the resilient Soto away 2:20 into the final frame of the 135-pound title tilt. The Bellator veteran kept things interesting with his counterpunching ability in the first four rounds, but even then, Dillashaw controlled the tempo with his pace and output.

“He did a good job with his defense and covering up,” Dillashaw said. “I got a little bit too loose sometimes because I was able to be aggressive because he was covering up. I didn’t want to put too much into each punch because I knew he was a good wrestler. I had to try and use some angles to where he couldn’t get the takedowns.”

While Soto earned plenty of respect for stepping in to save the card, Barao left without earning a dime, according to White. It was undoubtedly a bad weekend for the former bantamweight king, but that didn’t mean Dillashaw was free from answering questions about rescheduling his rematch with the Nova Uniao standout.

For time being, Dillashaw is ready to move past that fight.

“For now it’s behind me,” he said. “I just had to beat Joe Soto. I had to switch my mind up in one day. I hate those questions: ‘Who do you want to fight next?’ I’ve just been thinking about one person for the last 10 weeks, and I had to switch it up last night.”