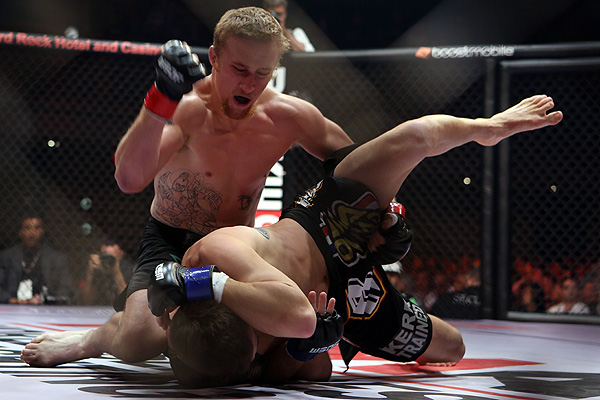 Justin Gaethje was a wrestler at the University of Northern Colorado when he met Georges St. Pierre.

His coach had invited the UFC welterweight champion to wrestle with the Northern Colorado team while he was training nearby. Gaethje also got the opportunity to wrestle with Clay Guida, Donald Cerrone, Cub Swanson and other MMA veterans.

“I just started talking to those guys, and they were no different than me,” Gaethje told the Sherdog Radio Network’s “Beatdown” show. “I figured why not [fight]? Why not give it a shot?”

Gaethje, who became a Division I All-American at Northern Colorado, excelled immediately in MMA. If he didn’t lack for confidence, wrestling with a bunch of UFC veterans might explain why.

“When I’d get a takedown on one of those guys, it felt pretty good,” he said.

Now he’s 9-0 as a professional heading into his lightweight matchup Saturday against Dan Lauzon at World Series of Fighting 6. The undercard streams live and free on Sherdog.com.

In Lauzon he’ll be facing another UFC vet. The 25-year-old has won five straight since he left the UFC. Gaethje watched him outpoint John Gunderson in June and got a sense for his style, though he says he’s less worried about game plans and more interested in a throwdown that will entertain the fans.

“All I can hope for is Dan’s willing to put on the show that I’m willing to put on and he meets me in the middle and we can throw down for two minutes or 15 minutes,” Gaethje said. “… I’m going to just be active and I’m just going to take it wherever it needs to go.”