FRESNO, Calif. –- Mike Aina picked up a controversial and anticlimactic victory at the inaugural Strikeforce Challengers event Friday against Billy Evangelista, who was disqualified for throwing an illegal knee to the head of his downed opponent at 3:40 into the second round.

Fresno’s Evangelista won the first round, and looked to be on his way to winning the second with a grounded Aina pressed up against the cage taking power shots. Aina attempted to stand when Evangelista landed what referee Herb Dean ruled an illegal knee to the Hawaiian’s head.

As the doctors came in to examine the downed fighter, the replay on the screen showed Evangelista landing what looked to be a legal knee to Aina’s shoulder that caused the Hawaiian’s arm to smack into his face.

The crowd booed in support of Evangelista, but the referee’s call stood, and Evangelista took his first career loss.

Referee Dean stood by his decision, telling the audience the doctors diagnosed Aina with a potentially broken jaw. Dean said he could not differentiate if the blow had been intentional or not.

Sarah Kaufman remained undefeated with a unanimous decision victory in a highly entertaining back-and-forth battle against Miesha Tate. The fight was even going into the third, as each fighter had decisively dominated one round apiece.

The first round was all Kaufman, who seemed on her way to her ninth TKO victory, but somehow the stunned Tate survived. Tate used her superior wrestling to gain top control and rain down punches to take the second set. 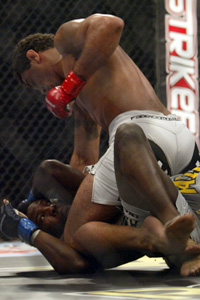 Jeff Sherwood/Sherdog.com
Fabricio Camoes beat on
the overmatched Torrance Taylor.
In the final round, Kaufman was successful in defending takedowns and landing strikes on Tate, who bled heavily from her nose but wouldn’t quit. Kaufman looked impressive going the distance for the first time in her career.

Seumanutafa shot in for a takedown attempt and Johnson landed a right uppercut that put his opponent down and out.

Aaron Rosa choked local favorite Anthony Ruiz unconscious with a rear-naked choke at 4:29 into the first round of their light heavyweight tilt.

It was Ruiz who came out pressing the action, landing a combo before pressing Rosa against the cage. Ruiz then landed knees to Rosa’s thighs, searching for a takedown.

Rosa was able to reverse on the fence though, got the takedown and quickly transitioned to mount. Ruiz tried to turn and escape, but Rosa took his back and locked on a body triangle. From there, it did not take Rosa long to sink in the fight-ending choke. Ruiz refused to tap and went to sleep for it.

Bao Quach kicked off the night’s main card with a controversial unanimous decision over a dangerous Tito Jones. Quach won the first two rounds by staying out of range and landing effective leg kicks, but Jones took over in the third, dropping Quach twice to deliver the only real damage of the fight.

The crowd showed their displeasure with the decision, after Jones nearly finished the fight in a final round that could have easily been scored 10-8.

Local Clovis High School teacher Ben Holscher won his second pro contest against Cody Canterbury with a rear-naked choke only 2:47 into the first round. Holscher found himself in danger early, fighting his way out of a guillotine choke, but later took his opponent’s back and softened Canterbury with strikes before sinking in the winning submission.

Ousmane Thomas Diagne, who is trained by Strikeforce middleweight champion Cung Le, won his MMA debut against the tough and experienced Kaleo Kwan with a unanimous decision. Diagne dominated the first two rounds with dynamic striking and unorthodox kicks reminiscent of his mentor. Kwan almost pulled out a last-minute upset, stunning the rookie late in the third, but a rocked Diagne was saved by the bell.

Fabricio Camoes dominated in his undercard contest, needing only 3:21 to secure a rear-naked choke over Torrance Taylor.