Brown, gunning for his third successful title defense, ran into a Brazilian buzzsaw and simply never got in gear.

Aldo used perfect distance, coupled with powerful leg kicks and laser-like punches, to keep Brown guessing from the outset. The Nova Uniao standout executed at will. Brown attempted a few takedowns early, but Aldo sprawled effectively. When the two featherweights drew close, Aldo either slammed the American’s legs with vicious kicks or ripped crunching knees into his midsection.

Just before the end of the first round, a knee to the stomach appeared to steal Brown’s breath, but the defending champion dropped to his knees and clinched onto the challenger’s legs until the horn sounded. Although Brown escaped, he was far from out of the woods, and Aldo’s firepower wilted the defending 145-pound titleholder early in the following stanza.

Aldo stuffed a takedown, and during a scramble, Brown lost his balance, allowing the Brazilian to move into a dominant position. Brown tried to return to his feet, but Aldo was relentless and immediately seized his back. In the blink of an eye, Aldo had Brown flattened and trapped, turning him into an easy target. Aldo left nothing in the hands of the judges and unloaded a furious assault to the sides of Brown’s head. Dozens of punches -- some of them clean, some of them blocked -- rained down, and referee Steve Mazzagatti had no choice but to step in and end the mugging. The end came 1:20 into the second round. 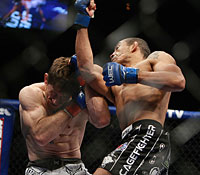 Dave Mandel/Sherdog.com
Aldo was too much for MTB.
“Mike is very strong. I respect him a lot,” Aldo said through his interpreter. “I had to wait for the right moment to finish the fight.”

“He had a great night,” Brown said. “He was landing the shots, and I wasn’t. That’s how the game is. He’s a great fighter. I have to look at the tapes and do my homework and try to improve, obviously. He did a great job and exposed some holes I had.”

“The Ultimate Fighter” Season 5 runner-up Manny Gamburyan scored a unanimous decision victory over the rugged, dangerous and world-ranked Leonard Garcia in the co-main event. Scores were 30-27, 29-28 and 29-28.

It was no walk in the park for Gamburyan, as Garcia pushed him to the limit. Gamburyan was the more fluid of the two, however, and his repeated takedowns were the key to his victory.

“I knew he was a tough guy,” Gamburyan said. “I survived today. He’s a good fighter.”

Garcia tried his best to keep the fight standing, and he let his fists go when the opportunity presented itself, but Gamburyan was shrewd and kept himself out of a slugfest. Whenever Garcia moved too close or missed a wild shot, the Armenian-born Gamburyan was there to slam him on his side, his trunks or his back.

The win, Gamburyan’s second straight since his move to the WEC, thrusts the judoka into title contention in a division that grows deeper by the month.

Armenian transplant Karen Darabedyan thought he did enough to nab a decision against former lightweight champion Rob McCullough in his WEC debut, but he had to sweat it out some as the scorecards were read. 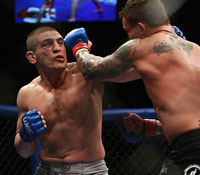 Darabedyan gave McCullough trouble early in the fight with powerful left jabs, and when he engaged the former titleholder in flurries, he got the best of him virtually every time. McCullough’s Team Punishment cornermen begged him to throw more leg kicks, but he could not seem to crack Darabedyan’s style and looked reluctant to unleash. Darabedyan controlled the pace of the first two rounds and seemed as if he was going to coast unless the wheels came off in the fight’s final round.

McCullough turned the tide in round three, as he figured out his foe’s gameplan and unloaded with a vicious array of leg kicks. When McCullough goaded Darabedyan into spurts of flurries, his right hand and short left hook landed more frequently than not. Darabedyan eventually relented and backed away, sensing perhaps it was in his best interest to steer clear. McCullough’s rally fell short as a result. 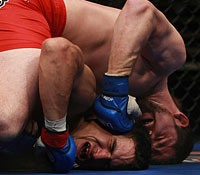 Dave Mandel/Sherdog.com
Roller tapped Castillo.
Roller had been taken down repeatedly early in the fight, and it seemed as if it was going to be a long, disappointing night for the Team Takedown fighter. However, Roller never gave in and eventually cinched a perfect rear-naked choke, forcing his opponent to tap out at the 3:32 mark.

“He kind of lifted his chin a little bit, and I just went for it,” Roller said. “I gave it all I had and hoped he would tap and he did. He was tough.”

Castillo pressed the issue from the start. However, from the second round forward, he left himself wide open a little too often. Roller capitalized on the openings and eventually scored the submission.

Roller almost had the choke late in the second stanza, but Castillo shook off his opponent’s attempt. Castillo was not as fortunate in round three, though he opened the period with a perfect sprawl and dominated Roller from up top. Roller scrambled free of the onslaught, and Castillo allowed him enough space to bounce up to his feet.

Castillo, possibly sensing a stoppage of the now-fatigued Roller, missed with a loopy left hook. The errant punch allowed Roller to slam his foe to the ground, where he secured back control. Roller wasted no time in securing the choke, and though Castillo defended it as best he could, Roller’s boa-like arms were wrapped too tightly around the neck.

Kamal Shalorus made the most of his WEC debut and was simply too much for Will Kerr to handle.

Shalorus swarmed Kerr right from the outset and deposited him onto the seat of his trunks with the first punch he landed, a loopy left hook a few seconds into the bout. Kerr was dazed but cleared his head quickly, and when Shalorus moved to end the fight there, the New London, Conn., resident tried to latch on an armbar.

“The Prince of Persia” was keen, escaped unscathed and brought the fight back to its feet. Shalorus wasted little time in closing out the battle. Shortly thereafter, a massive straight right detonated on Kerr’s jaw, dropping him to his knees. Shalorus fired off a glancing left hook as Mazzagatti dashed in to halt the action at the 1:26 mark.