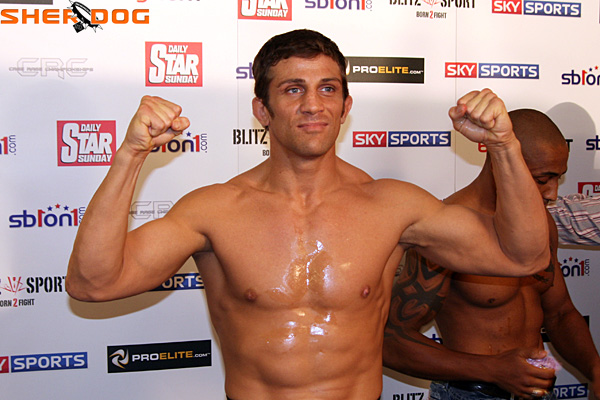 The 37-year-old Reid went from charismatic journeyman to U.K. tabloid entry in 2009 and 2010 after he began dating British glamor model, tabloid queen and now ex-wife Katie Price and won “Celebrity Big Brother.” In just his third bout over the last five years, Reid took a sloppy unanimous decision over Boo, largely scoring in the standup with forward boxing pressure, hard low kicks, and an untold amount of flush knees to the face.

Though Boo looked much the punching bag early, the Bournemouth fought well in spurts, guillotining his way to top position in round two and hurting Reid with windmilling punches on several occasions. Both men tired quickly and traded positions frequently, but Reid’s experience showed in the standup where he landed more regularly than the novice Boo, he of two years pro MMA experience and now a 5-8 record.

The final tallies were three 28-27’s for Reid, now 10-9-1, courtesy of matching point deductions in the woolly second round.

“I didn’t feel myself. That was sloppy, really close. He’s been fighting two years and sometimes hunger counts more than experience. He certainly tested my mettle,” Reid said after the performance. “We picked Sam; fair game, he tested me. I underestimated him. That’s what hunger does.”

In what was slated to be the last bout on the night before the shuffling of Reid-Boo for Channel 5’s television scheduling purposes, Marshman looked to treat “Professor X” as simply a showcase opponent, putting him on the mat quickly and locking up a tight armbar. Despite the grisly contortions of Foupa-Pokam’s right arm, the spindly striker escaped the hold and another subsequent armlock to take over the fight from top position.

Early in the second round, Foupa-Pokam took Marshman to the mat and slashed him wide open beneath the right eye with a sharp elbow. The blood streamed over Marshman’s face for the final two rounds, where most of action saw Foupa-Pokam on top, grinding away with punches and elbows. Marshman’s last gasp was a triangle midway through the third, but the veteran escaped and continued to pound away until the final horn.

“His arm was like elastic. He slipped into the triangle in the third, he was gargling. I thought he was going to go,” said a badly scuffed up Marshman post-fight.

The Birmingham fighter was the superior fighter at range, peppering Kee from the outset. After the fight hit the floor, Breese smoothly transitioned to Kee’s back almost immediately, sinking in the rear-naked choke in the process. It was elementary from there as the tap came at 3:06 of the first.

Scotland’s Steven Ray became the BAMMA British lightweight champion by dominating Storm Gym’s Dale Hardiman on the mat for 15 minutes. The Edge MMA rep took Hardiman’s back in the opening frame and it set the tempo for the rest of the bout. Hardiman landed strikes when he was able to scramble back to his feet, but the hardware was never in question as Ray took three 30-27 scorecards, moving to 12-3.

Undefeated light heavyweight prospect Max Nunes upped his pro mark to 9-0, steamrolling Cumbrian journeyman Kevin Thompson. After cutting his opponent with a wild, flying switch-step kick, the 23-year-old Swede got a takedown and pounded on Thompson, eventually knocking him cold with a diving punch into the guard at just 1:40 of the bout.

London-based Pole Marcin Lazarz stayed unbeaten, overcoming an early knockdown from heavy hitting light heavyweight Sam Mensah before locking up an armbar victory at 4:16 of the opening round. James Doolan absorbed early ground-and-pound from foe Spencer Hewitt, but the lanky Scottish bantamweight quickly regrouped and locked up a fight-ending triangle just 1:42 into the contest.

Native Pole Dawid Farycki pounded out Liverpudlian Bryan Creighton 4:25 into the second round out of their bantamweight contest.

In the evening opener, Keddles Gym light heavyweight Mike Neun outlasted Thomas Denham in a back-and-forth bout, stopping him at 3:58 of the third frame.