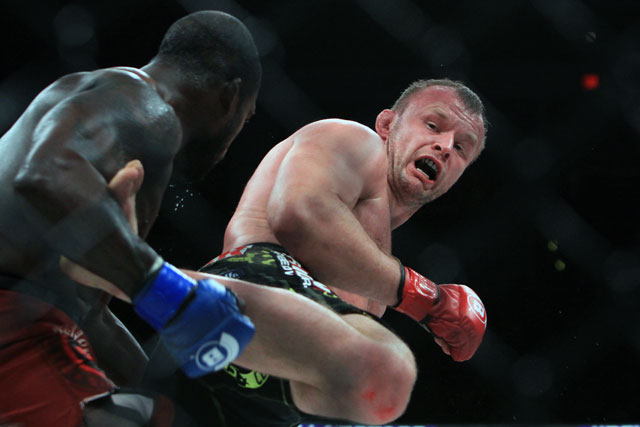 Shlemenko flattened the Suriname-born Dutchman with an exquisite spinning backfist in the second round of their Bellator 133 headliner on Friday at the Save Mart Center in Fresno, Calif. Manhoef (29-13-1, 1-2 Bellator) met his end 1:25 into round two, as he was knocked unconscious for the second time in as many appearances.

Not much went according to plan for Manhoef. Shlemenko (52-9, 12-3 Bellator) disrupted his rhythm with spinning attacks, a grinding clinch and repeated takedown attempts. A little more than a minute into round two, the Russian set himself, turned and slammed his wrist and forearm into Manhoef’s temple. The onetime Cage Rage champion staggered and collapsed to the ground, where he was met with one last diving right hand from Shlemenko. 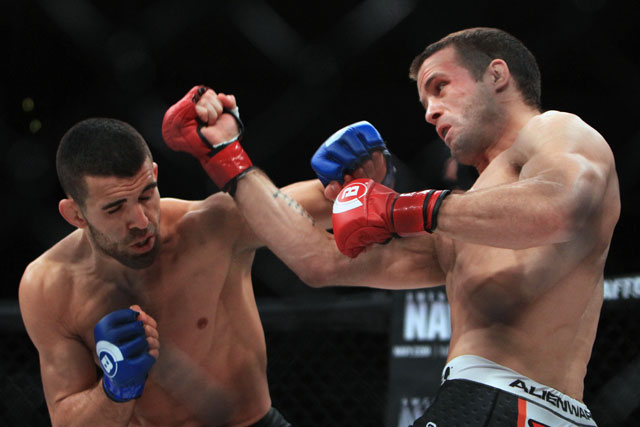 (+ Enlarge) | Photo: J. Sherwood/Sherdog.com
Weichel earned the split decision.
In the featherweight co-main event, former M-1 Global champion Daniel Weichel put his seventh straight win in the books, as he picked up a split decision over Pat Curran. All three judges scored it 29-28: Marcos Rosales saw it for Curran, while Abe Belardo and Derek Cleary sided with Weichel (35-8, 4-0 Bellator), who staked his claim as a title contender at 145 pounds.

Curran (20-7, 10-4 Bellator) never got out of the gate. Weichel steered the two-time Bellator titleholder away from the center of the cage, punched beautifully in combination and scored with the occasional leg kick. Curran leaned heavily on his right hand and secured a late second-round takedown, but he did not do nearly enough to counteract the persistent work of the surging German.

The 27-year-old Curran has lost three of his last four fights.


Dethrone Base Camp prospect Chris Honeycutt put away Clayton MacFarlane with third-round punches in a welterweight showcase. MacFarlane (4-1, 0-1 Bellator) succumbed to unanswered blows from the back mount 4:16 into round three. 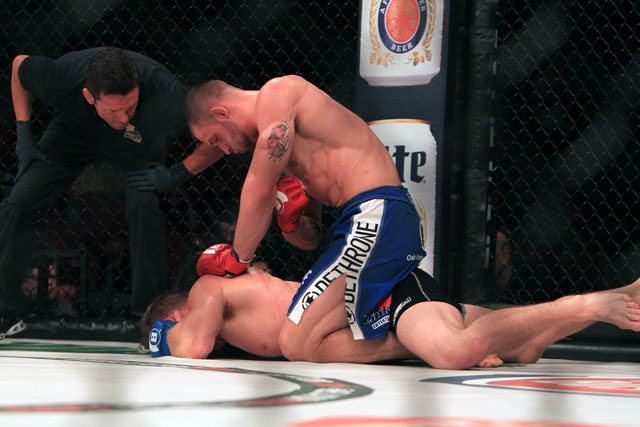 (+ Enlarge) | Photo: J. Sherwood/Sherdog.com
Honeycutt totally manhandled MacFarlane.
A two-time NCAA All-American wrestler at Edinboro University, Honeycutt (6-0, 2-0 Bellator) established his superiority from the start, executing multiple takedowns in the first round. He expanded his lead in the second, where he rattled MacFarlane twice, initially with a head kick and later with a knee strike from the front headlock position. Honeycutt mixed in ground-and-pound when the action hit the mat, wearing down his counterpart and setting the stage for the finish. In the third round, the 26-year-old struck for another takedown, climbed to mount and eventually forced MacFarlane to surrender his back. Soon after, Honeycutt sealed it with punches to the head, ears, back and ribs.

Holloway (4-2, 0-1 Bellator), who replaced an injured Talita Nogueira on short notice, was a non-factor. Budd delivered takedowns in all three rounds and piled up points with non-damaging ground-and-pound, which featured continuous knees to the body, thighs and buttocks. Holloway enjoyed a brief glimmer of hope early in round three, where she landed a head-and-arm throw. However, Budd soon returned to her feet and resumed her attack in close quarters.