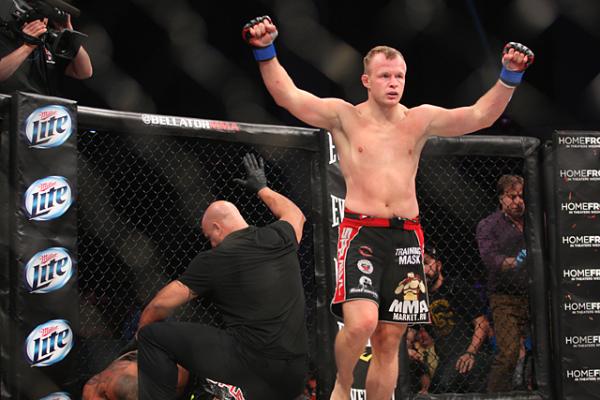 “Storm” made the American work to defend several takedowns in the opening minutes of the five-round fight and then drove his opponent into the cage, where he began feeding Marshall a steady diet of knees to the body.

Finding success downstairs, Shlemenko stayed on the attack, buckling “The Rhino” with a clubbing left hook to the ribs. Though Marshall did his best to load up on one of his powerful right hands, Shlemenko’s defense proved adequate as he ravenously pursued the challenger and put him down with another nasty left hook to the liver.

“I [worked very hard]. My favorite move is the liver shot. I am champion,” Shlemenko said. “I am a striker, and so is Doug Marshall. I just strike much harder than he does. I am a better striker.”

Shlemenko will next defend his belt against Brennan Ward, who earned his title shot by trumping Mikkel Parlo two weeks ago in the Season 9 middleweight tournament final. 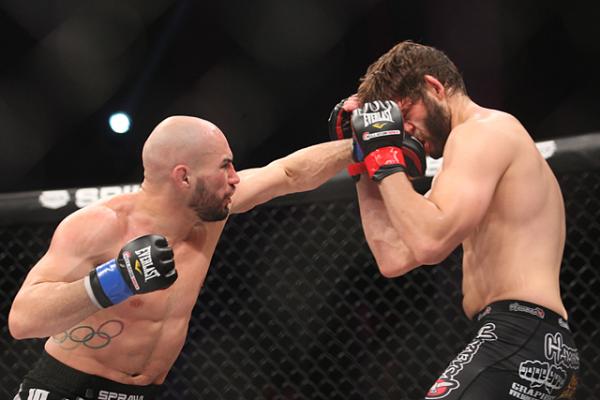 Though Hawn would eventually take control, he was forced to overcome some early adversity when Keslar caught him with a clean uppercut and then shoved him to the canvas in round one. The judo Olympian worked his way back to his feet and began to set a pace with his jab, carrying that momentum with him into round two, where he continually touched Keslar with crisp lefts and rights.

Round three would then signal Keslar’s demise, as Hawn unloaded with an unrelenting arsenal of punches that began with a short right hand and a series of uppercuts. The judoka then pursued with a powerful right cross and uppercut, followed by a vicious overhand that finally floored the American Kickboxing Academy representative. Hawn will now face Douglas Lima for the promotion’s vacant welterweight title, formerly held by current free agent Ben Askren.

“He was kicking my ass the first round. It was do or die. He’s a tough guy and a big dude, so I had to turn it up,” said Hawn. “He took a few shots, and I thought he was going down. I kept chipping away and finally got him. I was relieved.” 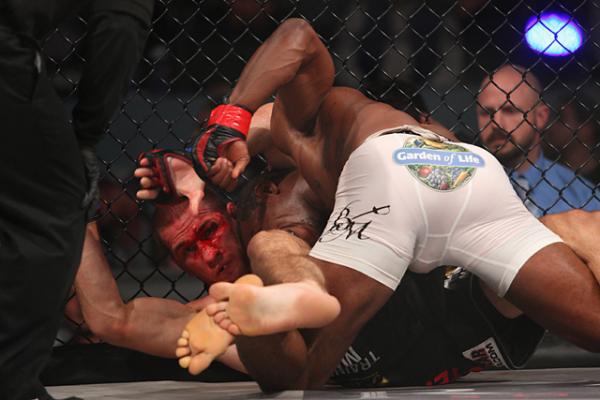 Photo: K. Mills/Sherdog.com
Brooks bloodied Sarnavskiy up over 15 minutes.
Will Brooks used a superior wrestling game to earn himself a title shot at the expense of Alexander Sarnavskiy in the Season 9 lightweight tournament final.

Brooks looked sharp from the get-go, exchanging evenly with the dangerous Russian early in round one, even as Sarnavskiy stuffed his initial takedown attempts. Midway through the first frame, however, Brooks dragged “Tiger” to the canvas, establishing a trend that would bleed into the final 10 minutes of the contest.

Though Sarnavskiy looked comfortable with his boxing to begin round two, the American quickly planted him with another takedown, pinning his man against the fence and dropping measured ground-and-pound before taking Sarnavskiy’s back and mounting him to end the frame. Round three would prove even more dominant for Brooks, who unloaded with a continual stream of hard shots before once again taking Sarnavskiy’s back en route to a clear-cut unanimous decision win.

“What did I tell you from the start? I’m going to be simple, effective and devastating. I think I did that this entire tournament,” said Brooks. “Michael Chandler and Eddie Alvarez can keep beating each other up and hold onto my belt. I’m coming for it.” 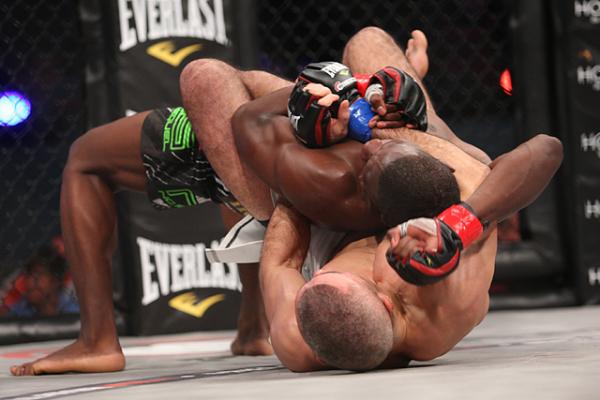 Etim dominated the three-round lightweight affair from start to finish, scoring takedowns throughout the contest and taking Cenoble’s back for the majority of round one. Though the Englishman could not advance to such a dominant position in the second stanza, he once again found himself latched onto Cenoble’s back in round three, locking up a body triangle and fishing for a rear-naked choke.

While Etim could not find his squeeze, the decision proved elementary, with all three cage-side judges favoring the Octagon alum with scores of 30-27, 30-26 and 29-28. 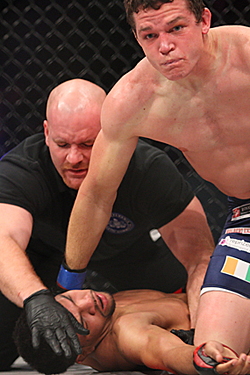 Photo: K. Mills/Sherdog.com
Bannon made quick work of Abdullah.
Lightweight prospect Mike Bannon ran through Ahsan Abdullah to close out the Bellator 109 preliminary card, grounding the nine-fight pro before putting him to sleep with an arm-triangle choke in just 1:51. Earlier, former combat sambo world champion Blagoi Ivanov overcame a flash knockdown in his heavyweight clash with Keith Bell to secure a takedown and submit his foe with a rear-naked choke at the 3:59 mark. Just prior, Brazilian prospect Goiti Yamauchi smashed Saul Almeida at 2:04 of round one, flooring his opponent with a hard combination and then pounded him out with right hands on the mat. Former NCAA Division I champion Bubba Jenkins then returned to his winning ways at the expense of Ian Rammel, whom Jenkins stopped at 2:38 of the third-round with an explosion of punches on the floor . Earlier, surging lightweight prospect Brent Primus finished Brett Glass with a first-round rear-naked choke at 3:20 and Lester Caslow tapped out Jay Haas with a guillotine at 2:44 in the third round of their featherweight duel.