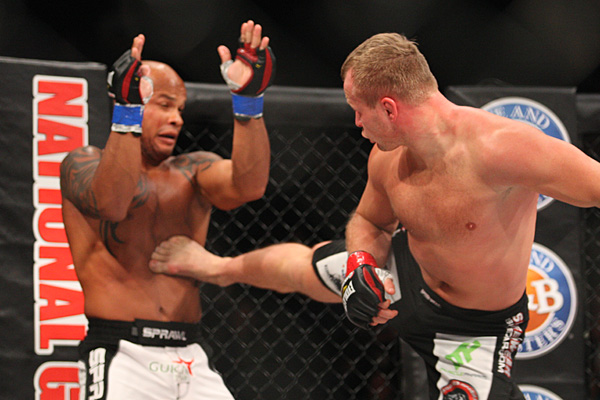 
Alexander Shlemenko finally got his belt.

“I am champion in Bellator, and I am [the] face of Bellator now,” Shlemenko said in his post-fight interview at the The Arena at Gwinnett Center in Duluth, Ga. “Whoever wants this belt, come on in this cage. I will beat you.”

Though Falcao looked sharp in the first five minutes of Thursday night’s headliner on Spike TV, Shlemenko weathered the Brazilian’s early aggression and went to work in the second stanza, grabbing a Thai plum and punishing “Big Rig” with knees to the ribs before ripping him with a nasty left hook to the liver.

Uneasy from the body blows, Falcao slowly dropped to his back, where the Russian blasted him with a jackhammer straight to the guts that elicited a grimace from the onetime UFC talent. With Falcao’s guard lowered to protect his stomach, Shlemenko let loose with two haymaker shots to the Brazilian’s skull, knocking him stiff 2:18 into the second round.

“It was a liver shot first,” Shlemenko said of the final sequence. “Then it was [alternating] between liver shots and head shots that finished him.”

Though Stepanyan appeared to be the more relaxed of the two in the opening frame, the Russian was warned by referee George Allen for grabbing the cage in a sequence that prevented a Sandro takedown. The Brazilian finally scored a trip to end the frame, however, slamming Stepanyan to the canvas.

Stepanyan then picked up where he left off in the second period, staggering Sandro with a spinning-heel kick and then briefly dropping the Brazilian with a sharp right hand. After eating another straight right and a spinning-back kick, Sandro tried for a takedown but was reversed. The Brazilian jiu-jitsu black belt dropped for a heel hook attempt to end the frame, only to see Stepanyan grab the cage as his defense -- a decision that forced Allen to take a point from the Russian.

Round three clearly belonged to Sandro, as the Nova Uniao standout scored with a pair of takedowns that kept Stepanyan grounded for the majority of the final five minutes. When the smoke cleared, two judges scored the fight 29-27 for Sandro, while the lone dissenting observer ruled the fight a 28-28 draw.


Mike Richman returned to his winning ways on Thursday night, brutally stopping Mitch Jackson to move on in the Season 8 featherweight tournament.

Perhaps learning from the over-aggressive approach that cost him against Shabulat Shamhalaev in Season 7, “The Marine” took his time with Jackson, peppering the 22-fight pro with sharp jabs and crosses that staggered his prey several times. With time winding down in the opening frame, the Minnesotan unleashed a whipping head kick that connected perfectly with his opponent’s temple.

“I was setting it up with my nice hands in the first round and wearing him out,” Richman stated in his post-fight interview. “That was my game plan, was to stuff a bunch of his takedowns and tire him out. Then I saw the head kick opportunity.”

As Jackson withered, Richman pounced, laying into his man with a wicked volley of hammer fists that eventually turned out Jackson’s lights with just three seconds remaining in the opening period.

“I just want to show everybody that if you get too close to me, I’ll put you to sleep,” said Richman. “I think I’ll make exciting fights against anybody.”


Alexandre Bezerra wasted no time in punching his ticket to the Season 8 featherweight semifinals, submitting Genair da Silva with a first-round armbar. The 25-year-old went to work early in the fight, dropping his fellow Brazilian with a stiff jab before climbing on his back in search of a rear-naked choke. Though “Junior PQD” would soon shuck Bezerra off his back and pound away from top position, “Popo” remained composed and calmly secured a straight arm lock from guard. Da Silva gamely tried to roll away from the pressure, but he could not complete his somersault and was forced to tap out at 1:40 of the opening stanza.


In the evening’s first featherweight tournament quarterfinal, Magomedrasul Khasbulaev worked over Fabricio de Assis Costa da Silva with ground-and-pound in round one before submitting his opponent with a second-round arm-triangle choke at the 1:15 mark; Joe Elmore fought through adversity in his 159-pound catchweight bout with Jerrid Burke, escaping from under Burke’s mount to turn out the lights of his lanky foe with a violent left hook at 4:11 in round two; in a 152-pound catchweight contest, Ronnie Rogers took a unanimous decision from Shane Crenshaw after 15 lackluster minutes, earning scores of 29-28 across the board; UFC veteran Clay Harvison halted a three-fight skid in his 160-pound confrontation with Ururahy Rodrigues, as he drilled his former training partner with a perfectly-timed knee and finished the job with punches at 3:34 in the third frame; in the evening’s opening contest, George Hickman earned a measure of revenge in his rematch with Stephen Upchurch, submitting the Georgian with a first-round rear-naked choke in just 2:19.