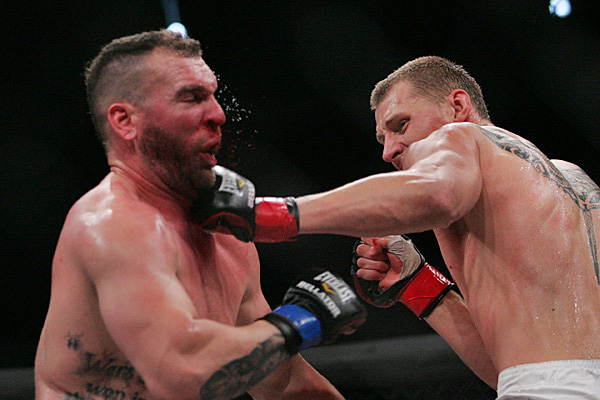 The Russian defeated Richard Hale via unanimous decision at Bellator 84 to win the promotion’s heavyweight tournament at the Venue at Horseshoe Casino in Hammond, Ind., on Friday night. Judges Kelvin Caldwell, Robert Madrigal and Otto Torrerio all scored the contest 49-46 in favor of Volkov, who has now won 10 straight fights.

“Please somebody pinch me, because I think it’s a dream,” Volkov said through a translator. “Right now I’m even more nervous than before the fight because it’s a great honor and a great responsibility.”

Both fighters were hesitant to engage for much of round one, but Hale appeared to have a chance at an early stoppage after he buckled Volkov with a big overhand right late in the period. The Russian quickly gathered his bearings, however, and tied up with his opponent to survive until the round expired. It would turn out to be Hale’s most significant offense of the fight.

Despite a perceived wrestling advantage, Hale was never able to initiate the clinch or shoot for takedowns – instead, it was Volkov who took the American down in both the first and second rounds. The Rusfighters Sport Club representative became increasingly comfortable as the bout progressed, keeping Hale at bay with crisp jabs and accurate kicks. While never totally dominant, Volkov landed consistently enough to bloody Hale’s nose and rack up points on the feet for the final 20 minutes of the contest.


For the second straight week, a last-minute cancellation left Bellator without one of its featured fights, as Marcin Held was not allowed to face Dave Jansen in the Season 7 lightweight tournament final due to his age.

According to multiple reports, the 20-year-old Held was not allowed into The Venue at the Horseshoe Casino by the state’s gaming commission because he is not 21. As a result, his scheduled bout with Jansen was removed from the Bellator 84 card. The bout is expected to take place sometime in Season 8. 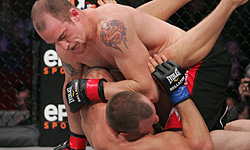 Hermansson began to rally late in round two by using a kimura to sweep into Vizcaya’s guard, finishing the stanza landing a series of short right hands to his opponent’s head. The Norwegian fighter continued his assault in the final frame, executing a belly-to-back suplex early in the round while staying busy with ground-and-pound throughout. Hermansson was unable to do enough to overcome his slow start, however. 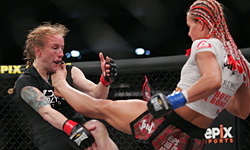 K. Mills
Herrig outpointed Vidonic.
Felice Herrig beat Patricia Vidonic for the second time in eight months, earning a unanimous decision in a women’s strawweight encounter. All three judges scored the fight 30-27 for Herrig, who also took a three-round verdict over Vidonic at XFC 17 on April 13.

Vidonic wanted to impose her will through takedowns and top control, but she was not able to attain top position until midway through the final frame. Instead, it was the more powerful Herrig who controlled every aspect of the fight. “Lil Bulldog” scored takedowns with ease and overpowered her opponent in the clinch.

When Vidonic attempted to close the distance on the feet, Herrig responded by connecting with punishing combinations. 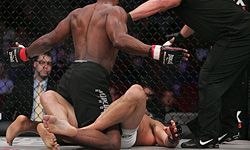 K. Mills
Taylor's knockout was gentlemanly.
Louis Taylor made his case for a spot in a future middleweight tournament, knocking out Joe Vedepo 4:12 into the opening frame of their featured clash.

The Chicago Fight Team product’s game plan was quickly apparent, as he executed an outside trip and took Vedepo’s back early in round one. The fighters briefly returned to their feet, but Taylor used the same maneuver to get Vedepo down again, this time moving to half guard. From there, “Handgunz” alternated short punches to his opponent’s body and head before the decisive right hand caught Vedepo on the chin, knocking him unconscious almost immediately.

“I know I had the knockout; that’s all I needed,” said Taylor, who offered no follow-up punches once he saw his adversary was out.


In preliminary action, Chrisitan Uflacker took a technical decision over Cliff Wright in a lightweight conflict; Jerald Williams earned a unanimous verdict (29-28, 29-28, 29-28) against Team Curran representative Joey Diehl in a flyweight scrap; Chicago native Anthony Gomez submitted Anton Talamantes with a rear-naked choke 3:29 into the opening frame of a 215-pound catch-weight affair; and in the opening contest of the evening, MMA debutante Robert White scored a unanimous decision (29-28, 29-28, 29-28) over Kenny Booker at lightweight.