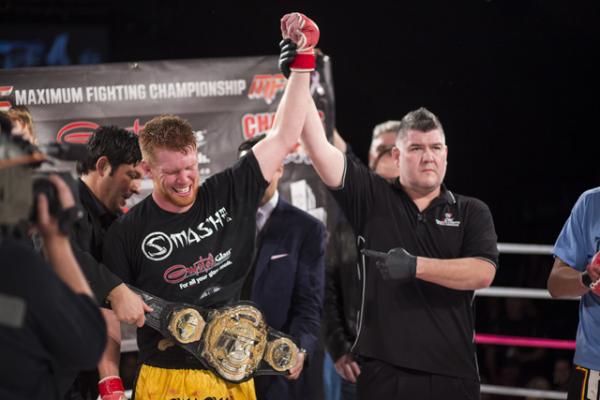 Alvey floored Swofford early in the fourth round of their headlining clash at Shaw Convention Centre in Edmonton, Alberta, dropping the lanky Californian with a counter right behind the ear. Though Swofford appeared to regain his wits quickly, referee Kyle Cardinal waved the bout off soon after Swofford’s limp body fell to the mat.

The bout’s decisive end came after three competitive rounds, though the first frame was no doubt the most action-packed, with both men hitting the canvas in the fight’s opening minute.

The middleweights would then trade shots competitively throughout the next two rounds, albeit at a much slower pace. Though Swofford was penalized a point at the end of round two for landing his second accidental low blow, the penalty ultimately mattered little, as Alvey brought a swift conclusion to the bout in its 16th minute.

“He hits like a truck. I countered a little bit, but I was still a little woozy. Stunning him really helped me, because I was in trouble for a second,” said Alvey. “He got me in the eye, and I lost sight in that eye for a little bit. The third round [wasn’t] my best, but I felt good going into the fourth.”

Just as he did four months ago, Gallicchio wrestled Southern to the canvas and took his back, forcing “The Hurt” to tap out to a rear-naked choke. Though Southern scrambled up to his feet and did his best to throw the American off his back, Gallicchio remained sticky during the slam attempt and gradually worked his forearm across the Canadian’s throat to elicit the first-round submission.

Meanwhile, the MFC’s first light heavyweight champion returned to the promotion in style on Friday, as Victor Valimaki took Bill Widler to the canvas, mounted him, and then finished him with a first-round rear-naked choke.

At 135 pounds, Jesse Brock took a split decision victory over fellow bantamweight Kevin Croom, swaying two of the three ringside judges in his favor. Marcus Edwards choked out Aaron Gallant in their lightweight showdown, dragging his opponent to the canvas and then forcing him to submit to a rear-naked choke in the waning seconds of round one.

In the evening’s first televised bout, Shane Campbell dispatched Jerrid Burke in the second round of their 160-pound catchweight, dropping the Georgian with a body kick before polishing him off with ground-and-pound.