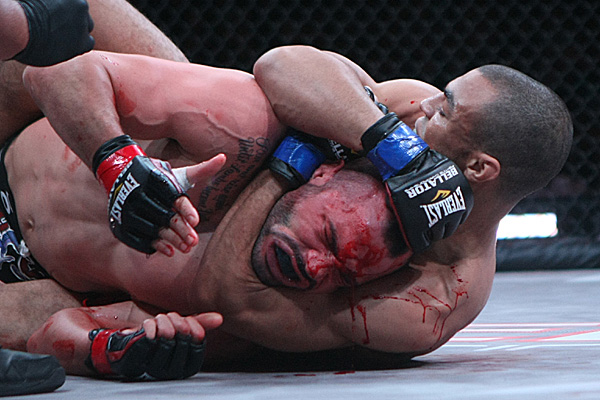 The blood on Karl Amoussou’s chest painted a picture of utter dominance.

Amoussou (14-4-2, 2-1 BFC) submitted Ohio-based knockout artist Chris Lozano with a first-round rear-naked choke in the Bellator Fighting Championships Season 6 welterweight tournament quarterfinals at Bellator 63 on Friday at the Mohegan Sun Arena in Uncasville, Conn. Lozano (9-3, 2-3 BFC) tapped out 2:05 into round one.

The two men spent much of their brief encounter circling one another -- until an Amoussou head kick opened up Lozano and permanently altered the complexion of the fight. Lozano wound up in top position after absorbing the blow, but Amoussou swept into mount from full guard, forced the American to surrender his back with rapid-fire punches and finished him with the choke.

“I’m not here to play,” said Amoussou, who has posted back-to-back wins for the first time in nearly three years. “You just saw the next tournament champion. I wanted to make a statement. This is what I’ve done.” In terms of meaningful offense, not much materialized between the tournament hopefuls. Pereira relied heavily on low kicks and the occasional counterstrike. Baker, meanwhile, went to the body of the former Shooto champion with kicks. Now anchored at Jackson’s Mixed Martial Arts in Albuquerque, N.M., Baker made his move late, as he scored with a takedown inside the final 30 seconds, moved immediately to side control and closed out the 15-minute matchup in the mounted crucifix position.

“That’s what I expected,” said Baker, a former middleweight who handed Pereira his second loss in his last 18 appearances. “I’m still learning this weight cut. Time to go to work.” K. Mills
‘Caveman’ clubbed Smith in 22 ticks.
David Rickels needed less than half a minute to dispatch “The Ultimate Fighter” Season 11 alum Jordan Smith on punches in the quarterfinals of the Bellator Season 6 welterweight tournament. It was over 22 seconds after it began.

The two men engaged one another from the start. A clubbing right hook from Rickels (10-0, 4-0 BFC) put Smith on his heels and sent him backpedaling towards the cage. “The Caveman” followed, blasted the reeling Smith with lefts and rights and put the exclamation point on his 10th consecutive victory with a series of right hands at the base of the cage. Smith (17-3-1, 0-1 BFC), a late replacement for UFC veteran Brian Foster, squatted and then collapsed.

“That was amazing,” Rickels said. “I clipped him, and I saw he was hurt. He buckled down, and I always look to finish. A couple of good uppercuts after that, and it was goodnight.” K. Mills
‘Killa B’ won, but Amaya was
proved a serious buzzkill.
Size, skill and experience carried American Top Team Orlando’s Ben Saunders to a unanimous decision over the previously unbeaten Raul Amaya in the Bellator Season 6 welterweight tournament quarterfinals. All three cageside judges scored it for Saunders (13-4-2, 4-1 BFC): 30-26, 30-27 and 30-27.

Saunders was relentless with his offense, scoring effectively in the clinch and from his back. The 28-year-old UFC veteran threatened Amaya (9-1, 0-1 BFC) with countless submission attempts from the bottom, slipped out of a few less-than-advantageous positions and peppered his fellow Floridian with heavy punches from the back mount on more than one occasion. To his credit, Amaya refused to go away, despite being racked with fatigue and a damaged left eye that was nearly swollen shut by the end of the 15-minute encounter. He even mounted Saunders
briefly in the third round.

“He was tough as hell,” said Saunders, who tipped his spear with numerous triangle choke, armbar and kimura attempts. “I gave him respect after. Kid fought to the end. It was definitely good to get [the first tournament win] out of the way.” K. Mills
Cramer kept it on the ground.
“The Ultimate Fighter” Season 7 quarterfinalist Dan Cramer avenged his August defeat to Jeff Nader, as he eked out a split decision over the Cape Cod Fighting Alliance export in a preliminary middleweight matchup. Two of the three judges, Cardo Urso and Eric Colon, scored it for Cramer (8-3, 5-1 BFC) by matching 29-28 counts. A third, Dave Tirelli, cast a dissenting 30-27 vote for Nader (5-5, 1-1 BFC).

Cramer did his best work in the bookend rounds, as he knocked down Nader in the first and struck for a takedown in the third. With the decision perhaps still in doubt, the American Top Team representative put Nader on the mat in round three. Backed by a crowd that came down decidedly in his favor, Cramer went to work with punches and kept Nader pinned to the mat, securing his
seventh win in nine outings. Koreshkov (9-0, 1-0 BFC) set the tone with a beautiful spinning-back kick, stunned his opponent with an overhand right and sent him on his way with a crushing right uppercut. Follow-up hammerfists punctuated the 21-year-old’s victory but were not needed. Howard (9-9, 0-1 BFC) has lost six of his last eight matches. After a competitive first round, Holland went to work with her fists. She whacked Kheyfets (5-1, 0-1 BFC) with a right, trailed her to the ground and looked to finish. Kheyfets survived the first few volleys and returned to an upright position twice. However, Holland put down the American Top Team standout for good with another right hand, leaving referee Todd Anderson little choice but to intervene. Keith Mills
Flemming forced Rogers to tap.
Brandon Flemming made quite an impression in his professional debut, as he submitted fellow rookie Pete Rogers with a first-round Peruvian necktie in a preliminary featherweight tilt. Rogers (0-1, 0-0 BFC) met his end 3:39 into round one.

Turned away on his initial takedown attempt, Flemming (1-0, 1-0 BFC) later scored with a hip toss, peppered his opponent with ground-and-pound and ultimately passed to side control. He then trapped Rogers during a scramble, controlling his head and neutralizing his hands before locking in the fight-finishing submission.