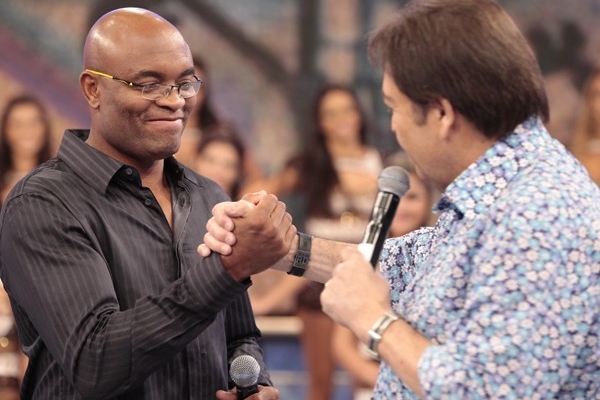 The show aired several moving testimonials from people in the UFC middleweight champion’s life, including his wife, children, mother and soccer legend Pele. Before that, however, Silva had to answer questions from the public.

One fan in the studio audience asked whether Silva agreed with the actions of Jon Jones, who declined an offer to defend the UFC light heavyweight title against Chael Sonnen after original opponent Dan Henderson came up injured. The decision ultimately led to the UFC canceling the Sept. 1 event.

“You have a whole camp preparing to fight a specific athlete,” Silva replied. “When the opponent changes, the preparation changes a bit. I thought he could have fought Chael, but it’s his decision. He prepared to fight Dan Henderson. The whole team thought it was best not to fight.”

Silva also spoke about the rumors that he offered to “save” UFC 151 at the last minute.

“When I heard the event might be canceled, I called [UFC President] Dana White and said I would fight in the light heavyweight division against someone who also wasn’t training for the event,” explained Silva. “Besides the main fight, the event had many other fighters who depended on it. I worried about that, because I have lived through situations like this in smaller events.”

Silva’s management recently announced that the champ plans to return in 2013, but exactly who he’ll face next remains unclear. One option is Chris Weidman, the unbeaten New Yorker who has been publicly campaigning for a shot at the 185-pound belt since defeating Mark Munoz in July.

“I didn’t refuse anything,” Silva answered when asked if he turned down a fight against Weidman. “I’m here to fight! He’ll get his chance sometime. You have to ask Dana White about this.”