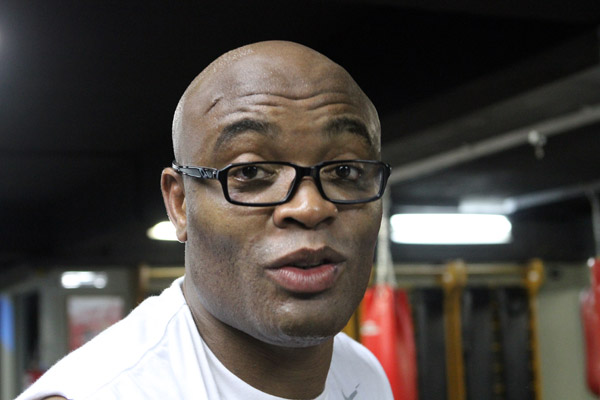 With all the commotion surrounding its creation, the UFC 152 main event between Jon Jones and Vitor Belfort has become the main topic of conversation in the MMA world.

Even UFC middleweight champ Anderson Silva has become involved in discussion of the matchup during a round of recent media appearances in Brazil. On Monday, “The Spider” gave his analysis of the 205-pound title fight -- which takes place Sept. 22 in Toronto -- during an edition of the SporTV program “Bem, Amigos!”

“It’s difficult, because Jon Jones has a larger-than-normal wingspan and he’s still very young,” Silva said when asked what Belfort needs to do in order to win the title. “He’s still in the phase where he’s playing during the fight, really, but he doesn’t have the responsibility of a champion.

“He fights with delight, jokingly, striking like I did back in 1930, when I started,” joked Silva. “Vitor has a great chance to defeat him. The biggest factor for Vitor is to use his explosiveness and his jiu-jitsu, where he is very good. But I think when one of them makes a mistake, the other will end up striking.”

Silva admitted that his opinion is slightly biased, since he’ll be cheering for his countryman to win come fight night, despite having a good relationship with his fellow UFC champ.

Answering a fan-submitted question, Silva also laid to rest the rumor of he and Jones squaring off in a super-fight any time soon.

“We’re in different weight classes and there are teammates from Team Nogueira who may face him,” Silva said, referring to ex-champ Lyoto Machida. “We have a code of conduct in our team, and I respect that a lot.”

Leonardo Fabri contributed to this report.