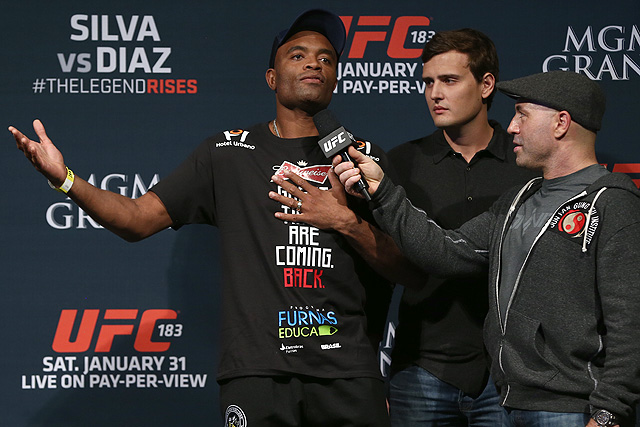 Anderson Silva says he's got an opponent lined up for his Octagon return. | Dave Mandel/Sherdog.com


As VIP guests at Friday’s Eurasia Fight Nights in Dagestan, Anderson Silva and Fabricio Werdum caused quite the stir backstage at the event. If Silva is to be believed, their next appearance together could be atop a UFC pay-per-view bill in early 2016.

In an interview during the event, Silva said that he will make his Octagon return next year in Curitiba, Brazil, on the same card that Werdum will defend the heavyweight crown in a rematch against Cain Velasquez.

“I think I fight in Curitiba in April, on the same card Fabricio Werdum will face Cain Velasquez,” Silva said. “My opponent will be Michael Bisping. I´m not quite sure, but I think it´s him.”

The UFC has made no formal announcement regarding such an event, but MMAFighting.com is reporting that the Las Vegas-based promotion is working on putting together a card at the 42,000-seat Arena da Baixada stadium. Bisping is currently booked to face Robert Whittaker at UFC 193 on Nov. 14, while Silva is serving a one-year suspension after testing positive for steroids at UFC 183. “The Spider” will be eligible to return to action in February.

Werdum could not confirm his bout, but the heavyweight champion didn’t exactly deny Silva´s statement, either.

“I truly hope this is confirmed by UFC,” he said. “Curitiba is close to my state, and many people would come from Porto Alegre, my homeland, to support me. I fought Velasquez in Mexico, so it´s fair that he face me in my home now.”

“I´m really impressed how MMA is popular here and how they respect our job. Many people talked to me about my win over Fedor [Emelianenko] and also Cain Velasquez,” Werdum said. “The Russian people are pretty much like Brazilians: Big heart in the fights and also to welcoming to foreigners.”

Silva and Werdum performed a ribbon cutting during the opening ceremony at Fight Nights Dagestan, the first time the Brazilians had crossed paths since “Vai Cavalo” submitted Antonio Rodrigo Nogueira in June 2013 and Silva refused to shake the victorious fighter’s hand.

“Actually I was really disappointed with his attitude that day, but we met here, talked and it´s all over,” Werdum said. “Actually ‘Minotauro’ himself came to my house few weeks ago for a barbecue. Anderson is a very funny guy to talk to backstage.”

Once he leaves Dagestan, Werdum said he will visit Ecuador, Europe and Brazil to fulfill a number of commitments. After that, the heavyweight champ expects to begin preparations for Velasquez in late November.