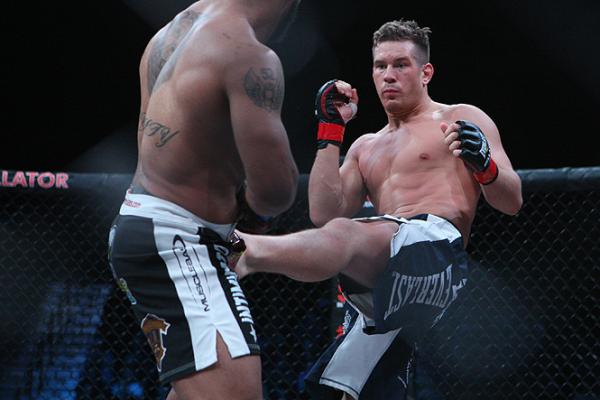 That much became crystal clear during the events preceding and following Bellator 66, when the Strikeforce veteran shoved Brian Rogers at weigh-ins and then did the same to Maiquel Jose Falcao Goncalves during an in-cage confrontation after both men got a little too close for comfort.

But what happened in between is what really counts, and that is where the “Sweet Swede” punched his ticket to the promotion’s Season 6 middleweight finals with a second-round knockout of Rogers. In a matter of hours, Spang will face Falcao in the Bellator 69 headliner at the L’Auberge du Lac Casino and Resort in Lake Charles, La. In the wake of inaugural 185-pound champion Hector Lombard’s departure to the UFC, promotion CEO Bjorn Rebney has announced that the winner will face Alexander Shlemenko for the belt at a later date.

Spang insists that his pre- and post-fight extracurricular activities were not premeditated.

“I’m always hoping my opponents don’t mess with me during the weigh-ins,” Spang recently told Sherdog.com. “It’s not a good time to play games, because I don’t feel good, and I am under weight. When I pushed Rogers at the weigh-ins, it wasn’t something I had planned.”

“It was the same situation [when] Falcao came in the cage and got in my face. I didn’t even know he was supposed to come in after the fight for a stare down,” he added. “After I won I was pumped up, and I turned around, and here is this guy right in my face. I didn’t have a chance to digest what was going on. I turned around, and he got really close to me, so I pushed him off of me. Again, it was just a reaction to get him out of my face ...I apologized to everyone at the weigh-ins, and I still feel bad to this day.”

While Falcao might say otherwise, the Las Vegas-based Swede said there are no existing harsh feelings between he and his Brazilian opponent. Spang’s only desire is to emerge from their encounter with another victory.

“Personally, there is no bad blood going into this fight with Maiquel Falcao. He’s just an opponent, and my objective is to win. My goal is always the same, and that is to win the fight,” he said. “I wouldn’t do anything more or less, whether I liked him or didn’t like him...Fighting with emotion is never good, and I’m not going to allow him to get me out of my focus.”

Spang became an unexpected entrant in the Season 6 middleweight bracket when Bruno Santos withdrew from the tournament due to injury. Now that he’s just one fight away from a title shot, Spang doesn’t plan on slowing down anytime soon.

“I am extremely grateful and excited to have this opportunity here with Bellator,” Spang said. “It has really changed my life. I am still in shock because of all of the exposure and everything that has been happening in my career. It's truly a gift. When you get opportunities like this, you have to make the most of them. I am here to win this tournament, and I am here to become a world champion.”