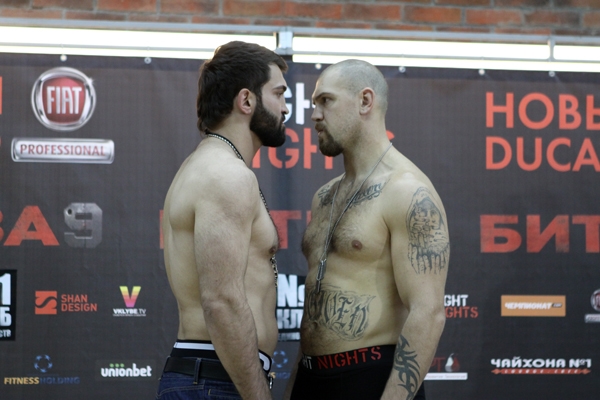 His opponent, Bellator veteran Mike Hayes of Redmond, Wash., weighed in at a considerably lighter 227 pounds.

“I had been trying to make the drop to 205 pounds on numerous occasions this year,” Hayes told Sherdog.com, “but when an opportunity to fight somebody like Arlovski comes around, you answer the call.”

The event streams live on pay-per-view on Sunday at 9 a.m. ET/6 a.m. PT and can be purchased through Sherdog.com for 99 cents. The first 100 people to order the pay-per-view will receive a coupon that can be redeemed to cover the price of purchase.

In the co-headliner of the MMA portion of Sunday’s card -- which also features three fights contested under K-1 rules -- Fight Nights flyweight champion Ali Bagautinov came in at 125 pounds. His opponent, Germany sambo champion Andreas Bernhard, weighed in at 123 pounds.

Due to a personal tragedy, Dutchman Nills van Noord was absent from the weigh-ins. The Bob Schrijber student and teammate of UFC heavyweight Stefan Struve was on his way to the airport Friday when his pregnant wife was involved in a car crash. His opponent, Moscow’s own Abdul-Kerim Edilov did make weight, and will face short-notice stand-in Nicholas Babchuk of Belarus tomorrow. Babchuk was not present at the official weigh-ins.