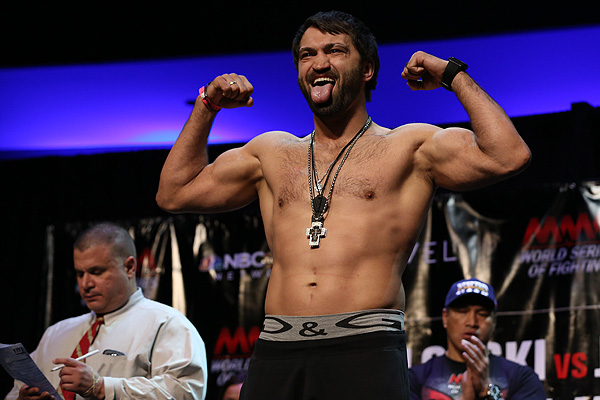 Who will win: Andrei Arlovski or Mike Kyle? Please tell us below. | Photo: Dave Mandel/Sherdog.com


Andrei Arlovski hasn’t been knocked out in a couple of years, but many still believe he has a suspect chin.

Apparently Mike Kyle, his opponent Saturday at World Series of Fighting 5, is among those who doubt his ability to take a punch. In an interview with the Sherdog Radio Network’s “Beatdown” show, Arlovski discussed his intention to prove Kyle wrong and much more. The WSOF 5 undercard streams live and free on Sherdog.com.

On whether he thought about quitting: “No, absolutely not. … I thought everything was going well except I can’t close my mouth. … I thought maybe right now I’m going to have a good punch and I’m going to knock him out. It didn’t happen, but to be honest with you, second, third round, every punch Anthony would throw at my head or in my chest, I felt like electricity -- [like] somebody put electricity in my body. It was so f--king painful.”

On dealing with a broken jaw: “I flew back to Chicago and I had surgery the next day, so I was with a broken jaw another 24 hours. It was kind of funny like some scary movie. People tried to stop me at the airport and asked about some pictures, autographs and when they saw my face, [they said], ‘OK, never mind. Have a good day.’”

On flying back home with injuries after fights: “Everybody asked me, ‘What happened?’ [I say] I was just hit by the car. They say, ‘Wow.’ They probably don’t understand my humor because I have kind of a different sense of humor. … At that time I tried to be positive and I tried to be funny too.”

On Kyle: “He gave some interview and he told that he was going to knock me f--king out because I have a weak jaw, I have a glass chin. I don’t [think] it’s impossible to prove to him that he’s wrong.”

On whether people saying he has a glass jaw makes him mad: “Somebody asked me yesterday or two days ago [if Kyle’s remarks] pisses you off. Yeah, definitely, it pisses me off, but now I’ve kind of came down. But before, like probably two or three years ago, I was so mad because … in heavyweight division, it doesn’t really matter how strong your chin [is] because of one punch, one right hard fast punch in the jaw and the fight’s over. But anyway, listen, first of all, I have proved that my chin is okay when I fought first Antonio Silva and he landed a few good right hands straight in my face and I survived. And I survived in my fight against Anthony Johnson. So I guess he’s wrong. If Kyle has only one hope that I have a weak chin, he’s absolutely wrong.”

On Kyle’s ability: “He’s a big, strong guy. He has a good jab and a sneaky right, so I have to be alert all the time about his boxing and striking, but I think I have something to put on the table too next to it. He mentions that he knows what I’m going to do because pretty much everybody who comes to fight from Greg Jackson’s gym, it’s only one game plan: takedown and ground-and-pound. We’ll see. He might be wrong.”