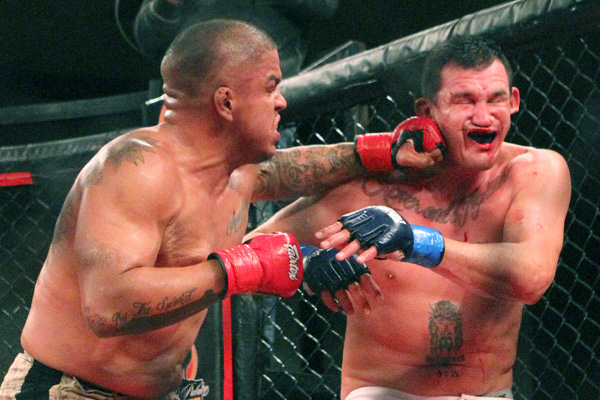 Angel DeAnda calls himself “The Dream.” For Anthony Ruiz, he was more of a nightmare.

DeAnda blitzed Ruiz with a relentless volley of power punches, as he captured the vacant Tachi Palace Fights light heavyweight championship in the TPF 15 “Collision Course” headliner on Thursday at the Tachi Palace Hotel and Casino in Lemoore, Calif. Ruiz (29-18, 2-3 TPF) met his end 3:39 into round three.

“He just wasn’t giving up,” said DeAnda, who has gone the distance only once in his 13-fight career. “If it wasn’t for [referee Jason] McCoy, we’d probably still be fighting.”

DeAnda was masterful throughout the matchup, dazzling his foe and onlookers with clean power punches, exceptional lateral movement and excellent takedown defense. Once it became clear Ruiz could not keep him on the ground, the fight was essentially over. DeAnda spent the first two rounds softening the Strikeforce, EliteXC and World Extreme Cagefighting veteran with a vast assortment of strikes, both in close quarters and at a distance.

In round three, with Ruiz clearly on the wane, DeAnda made his move. He pinned the 35-year-old Californian to the cage and unleashed a merciless stream of hooks and uppercuts with both hands. Ruiz never went down, but he was a spent force and McCoy had reason to intervene on his behalf.

DeAnda, who trains with fast-rising UFC bantamweight contender Michael McDonald, has won 10 of his past 11 bouts.

“Whatever they put in front of me,” he said, “I’m ready for the challenge.”

Velasco struck for takedowns in all three rounds and attacked with winging punches while standing. Beebe (12-2, 0-1 TPF) did his best work in the third frame, where he recorded a takedown of his own, settled into half guard and ultimately moved to Velasco’s back. Despite the advantageous position, nothing materialized for Beebe, the younger brother of former WEC bantamweight champion Chase Beebe.

Avila (10-1, 3-0 TPF) struck for a takedown inside the first 30 seconds, set up the guillotine from half guard, stepped into mount and finished it. He has won his last nine fights, six of them first-round finishes.

Martinez moved to the clinch from the start and slowly wore down Bernstein (4-7, 0-1 TPF) in close quarters. He stepped up his attack over the final 10 minutes, as he moved to Bernstein’s back in the second and third rounds, threatening him with rear-naked chokes. Though Bernstein refused to succumb to a finish, he could do nothing to avoid a fifth defeat in six appearances.

Fili controlled the distance with his reach and speed, struck for timely takedowns and peppered his experienced foe with punches and elbows from inside guard. Wilson (16-8-2, 0-2 TPF) twice moved to full mount but failed to hold the position, as Fili sprang reversals and resumed his attack from the top. The 22-year-old sealed it with a pair of third-round takedowns.

In preliminary action, Art Arciniega recorded his sixth straight victory with a unanimous nod over Strikeforce veteran Alexander Crispim at 145 pounds, sweeping the scorecards by 30-27, 29-28 and 29-28 counts; Team Alpha Male’s Freddie Aquitania captured a split decision (29-28, 28-29, 29-28) from Javy Ayala in a heavyweight rematch; PKG Training Center representative Dominic Clark stopped Andy Miranda on punches 1:50 into the first round of their lightweight duel; and Alex Perez posted his fourth win in a row, as he put away Carlos DeSoto with punches 1:52 into round one of their 150-pound catchweight affair.