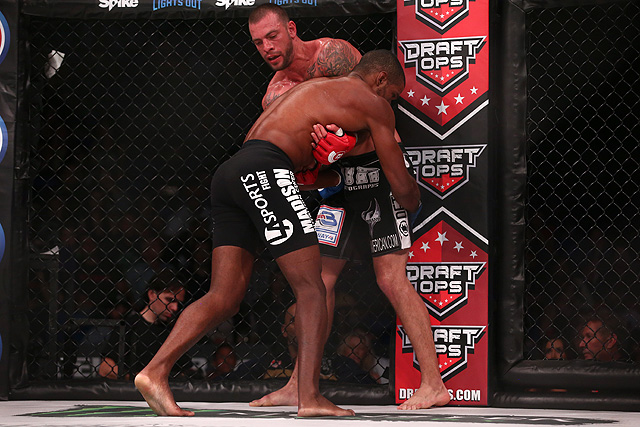 
Joe Schilling is a multiple-time champion in Muay Thai, and he loves a good scrap. He'll go to the ground if he absolutely needs to, but the Lion Fight and Glory veteran would much rather keep the fight on the feet so he can blow away his opponent via his superb striking ability.

Schilling covets an opponent who will stand and bang with him, but "Stitch 'Em Up" doesn't always get his wish. In his last fight against Rafael Carvalho at Bellator 136, Schilling thought he was getting a murderous striker who would gladly go toe-to-toe in the blink of an eye, but the Brazilian -- who had knocked out nine of his previous 10 opponents -- had other ideas.

Schilling was repeatedly taken down and controlled on the ground by Carvalho and wound up losing a decision in the process. It’s something that eats away at him every day, too. He’s lost before and that’s something he has learned to deal with, just like most elite fighters that have come before him. But it’s the manner in which he lost to Carvalho that sticks with him like a splinter jammed under a fingernail.

“Looking back at the Carvalho fight, I see that as a bad decision that I should have won,” an irritated Schilling told Sherdog.com in a recent interview. “A kickboxer should not have been able to hold me down; that’s embarrassing. That is something I have to accept and work on. I have been working on my wrestling a lot and if there are critics still talking about that fight, it’s probably about me being held down not by a high-level wrestler, but by some shitty kickboxer. That is what I think about every day and that’s what motivates me to go to the gym. It drives me nuts that Carvalho fought like such a vagina.”

Schilling's opponent at Bellator 139 on Friday is tough Japanese banger Hisaki Kato, a guy who has knocked out every foe he's beaten. Schilling doesn't know too much about him save for he's a fighter who would rather trade leather with his opponent than try submissions.

Or so it is believed. According to Schilling, he'll believe it when it happens.

“These guys all say they want to stand and trade with me, yadda yadda yadda,” he grumbled. “But it really doesn’t make much difference to me what they say or try to do. It also doesn’t matter if I end it early or if it goes deep; I’m in phenomenal shape and I’ve been training very hard.

“Knowing that he’s coming off a knockout loss and then also knowing that he’s fighting me, I’m willing to bet that he’s going to do what everybody does and that’s to try and take me to the ground,” he added. “I mean, why in God’s name would you want to stand up with me? Look at Carvalho: He had a bunch of knockouts on his record. [Bellator] had two really exciting fighters, and he made it a boring fight. I think that is what this guy will try and do as well, and the guy after him, and the guy after him, and so forth. I’ve been training really hard from having guys holding me down and making it a boring fight because I expect every single guy I fight to try and take me down from now on.”

When Schilling made his Bellator debut, it was after a six-year hiatus from MMA, this after starting his career a less-than-stellar 1-3. Obviously, the Los Angelino was busy delivering shins to the legs and heads of his foes on the Muay Thai circuit, but when he returned to MMA in one of the biggest shows in the sport, fans and media alike scoffed at how successful he'd be.

When he flattened popular bomber Melvin Manhoef in the second round, many an eye was opened. Maybe Schilling wasn't so bad after all, maybe he could actually do something in what is not his priority sport. But, according to Schilling, MMA is now his full-time gig, something he plans to dominate from here out. He has a realistic vision of what he expects from himself.

“I will be a really good Joe Schilling in MMA definitely within two years,” he said. “Right now I’m training just in MMA. I’ve been with the American Top Team for two months now. There is an insane amount of high-level training partners here, and I expect to be at my absolute best in about two years.”

Schilling first has to get past Kato on Friday night. His duel with the Japanese powerhouse is one of the featured bouts on the Bellator 139 card in Kansas and he knows in order to continue to remain viable, he has to take out his foe. If he does, maybe he’ll get another crack at Carvalho and, he expects, eventually the Bellator middleweight crown.