Dan Henderson picked up another title on Saturday in Buckeye Country. | Dave Mandel/Sherdog.com


Dan Henderson cocked and fired his fabled right hand, and Rafael “Feijao” Cavalcante, like many others before him, went down with a thud.

Henderson captured the Strikeforce light heavyweight championship with a rousing knockout against Cavalcante, as he put away the talented Brazilian 50 seconds into round three in the Strikeforce “Feijao vs. Henderson” headliner on Saturday at the Nationwide Arena in Columbus, Ohio. The two-time Olympian sent Cavalcante face-first to the canvas with a straight right, moved immediately to back mount and polished off the champion with heavy punches on the ground.

“Leading up to this fight, everybody was talking about the belt. I didn’t think about it until now. It’s definitely going to be an honor to defend that belt,” Henderson said. “I threw it, landed it and then jumped on top. He started to recover, but I landed a couple more good shots.”

Cavalcante had his chances, one of which was golden. He uncorked a ringing right hand of his own in the first round, as he wobbled and dropped the iron-chinned Henderson. Feijao closed to finish, but Henderson, perhaps fighting on instinct, stuck a double-leg takedown and recovered inside the Brazilian’s guard. The bout swung in Henderson’s favor in the second, as he scored with a pair of takedowns from the clinch and neutralized Cavalcante’s vast offensive arsenal.

“I wanted to be real patient,” Henderson said. “Obviously, I’d have liked to knock him out in first minute, but he’s a tough guy, especially in that first round. He caught me with a good dinger in that first round, but I was hoping I’d catch him in the third or fourth round and that’s how it happened.”

Less than a minute into round three, Henderson landed the fight-changing shot he was seeking. Feijao smacked the canvas with his face and tried to defend himself from a vulnerable position. However, the onslaught from the former two-division Pride Fighting Championships titleholder overwhelmed him, as referee Dan Miragliotta stepped in to stop it.

“[I made] a lot of mistakes, but [it] can happen to anyone,” Cavalcante said. “Today, it’s me; tomorrow, it’s him. I’m going to come back stronger, for sure.” 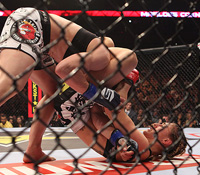 D. Mandel
Coenen (bottom) kept her title.
Strikeforce women’s welterweight champion Marloes Coenen survived a serious scare from previously undefeated challenger Liz Carmouche, as she submitted the former Marine with a fourth-round triangle choke in the co-main event. Coenen sealed the deal 1:29 into round four, and with that, a dramatic comeback was hers.

Carmouche bullied the Golden Glory standout for much of the matchup. A late replacement for the injured Miesha Tate, she took down, mounted and punished the seasoned titleholder with ground-and-pound in the second and third rounds. Coenen looked uncharacteristically out of sorts off her back, as Carmouche twice moved into a high mounted position and unleashed relentless volleys of punches and hammerfists.

Her right eye visibly swollen, Coenen again had to fight from her back in the fourth round. This time, however, she turned the tide in her favor. Coenen trapped Carmouche in full guard, snaked her legs around the challenger’s neck, tightened the triangle choke and waited for the tapout. Carmouche fought to free herself, but with no means of escape, surrender became her only option. A reluctant tapout followed.

According to CompuStrike figures, Carmouche outstruck the champion by a staggering 221-48 count.

“Liz was whooping my ass,” Coenen said. “I really want to make sure [I show] how much I respect her. She will be the champ someday.” 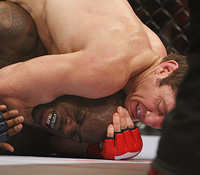 Kennedy reached the finish line but had to walk through the fire to get there. The 31-year-old San Luis Obispo, Calif., native failed on his first three takedown attempts and absorbed a brutal leg kick as a result. Manhoef finally succumbed to the takedown midway through the round, and Kennedy moved to mount roughly 15 seconds later. After his foe surrendered his back, Kennedy softened him with heavy punches and cinched the choke. From there, the tapout was inevitable.

“There was no hidden game plan there. He’s weak off his back,” Kennedy said. “His takedown defense is very underrated. I think I’m one of the greater wrestlers in MMA, and he’s ever-improving.”

“I want to fight. I fight for the fans, and I want to fight the best,” he said. “If the matchmakers don’t think I’m ready right now [for a rematch with Strikeforce middleweight champion Ronaldo “Jacare” Souza], then give me next best guy. Give me Robbie Lawler.” 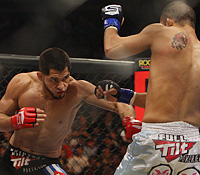 American Top Team’s Jorge Masvidal utilized size, reach and superior boxing, as he took a unanimous decision and swept the scorecards from the previously unbeaten Billy Evangelista in a featured lightweight matchup. All three cage-side judges scored it 30-27 for the Miami, Fla., native.

Masvidal worked off a stinging left jab and fought effectively inside and out. He attacked Evangelista with a variety of strikes -- straight rights, leg kicks and knees and elbows from the clinch -- and scored with takedowns in the second and third rounds.

The 26-year-old Masvidal has won seven of his past 10 fights and remains undefeated in three career appearances under the Strikeforce banner.