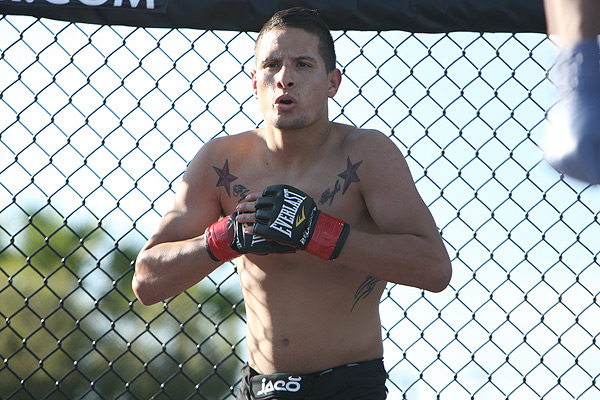 Birchak submitted Jones with a rear-naked choke 3:30 into the second round of the Maximum Fighting Championship 38 headliner at the Shaw Conference Center in Edmonton, Alberta, Canada, on Friday night to become the promotion’s inaugural bantamweight champion, moving to 11-1 as a pro.

A considerable underdog heading into the bout, Jones put forth a scrappy effort in the opening frame. The Sacramento, Calif., native held his own with Birchak in the clinch and in scrambles for the majority of the first five minutes. However, it appeared that Jones might have expended much of his gas tank in the process.

Birchak quickly imposed his will in round two. After landing his second takedown of the stanza, Birchak began measuring his shots on the ground. Jones absorbed some solid punches and elbows before surrendering back mount, where Birchak continued to pepper away with short, efficient strikes. Birchak’s barrage ultimately created an opening for the fight-ending choke.

“I saw him in the corner [between rounds] and I just saw his hands on his hips. If I could be in his head, he was probably like, ‘Yeah, I’ve got another round.’ Once I got on top he wasn’t defending himself,” said Birchak, who earned his second straight win under the MFC banner and fifth in a row overall. “I didn’t want to try to punch myself out… so I went for the submission.”

Birchak’s triumph highlighted an evening in which three titles were up for grabs. In the evening’s co-main event, Sam Alvey captured the MFC middleweight strap with a last-second technical knockout victory over Jason South. Just when it appeared that the bout was destined to go to the judges’ scorecards after five back-and-forth rounds, Alvey offered one final salvo to seal his victory at the 4:56 mark the final frame.

After South overextended himself on a punch, Alvey responded with a well-timed counter right hand. The blow sent South tumbling toward the ropes, where a few follow-up punches brought a halt to the fight with just four seconds remaining.

“It was there, I took it. My corner kept telling me: ‘Press, press press.’ I was trying, but he just kept grabbing me. He had such a strong clinch. I understand why they call him ‘The Mover.’ He was unmovable,” said Alvey, now 21-5 (1 NC) in his career.

Alvey really found his rhythm in round two. The “TUF 16” competitor rocked South repeatedly, dropping his opponent on three separate occasions. While Alvey appeared to be on the verge of a finish, he was unwilling to spend any significant amount of time on the ground with his opponent. Through it all, South somehow maintained his wits.

The bout became more competitive after that, as South was able to consistently draw Alvey into the clinch. While South’s forward movement never slowed, it was Alvey who landed the most significant strikes. In addition to the three knockdowns in round two, Alvey also opened a cut near South’s right eye in the second round.

Travis Browne training partner Anthony Hamilton earned the biggest win of his MMA career with a “Knockout of the Year” contender, head kicking previously unbeaten Smealinho Rama 12 seconds into the second round to take the MFC heavyweight championship.

Hamilton cut Rama open with heavy punches in the first both standing and on the ground. The 6-foot-5, 265-pound Hamilton used his size to great advantage in the opening frame, but excelled himself when the second round began. Hamilton launched a right roundhouse kick that decapitated Rama, his body falling in sections.

Hamilton improves to 11-2 with the victory, while Rama falls to 6-1.

Saskatoon, Saskatchewan's Kurt Southern avenged his February submission loss to Chicago-based Brazilian Jonatas Novaes, knocking him out in the first round. “The Hurt” dropped Novaes with a right hook partway through the first round, then sealed the deal with vicious ground-and-pound at 3:46 of opening frame.

Aaron Gallant missed weight, clocking in at 157 pounds for his contest with Matt Jelly. However, he made up for it with another number, turning in the fastest knockout in MFC history. It took Gallant just seven seconds to stun Jelly with a series of straight punches, then put him away with a right uppercut.

Edmontonian middleweight Cody Krahn tapped Nick Campbell at 2:18 of the first round with a triangle choke and in the opener, Lethbridge's Paul Gerbinski guillotined Sheldon Adamson in 98 seconds.