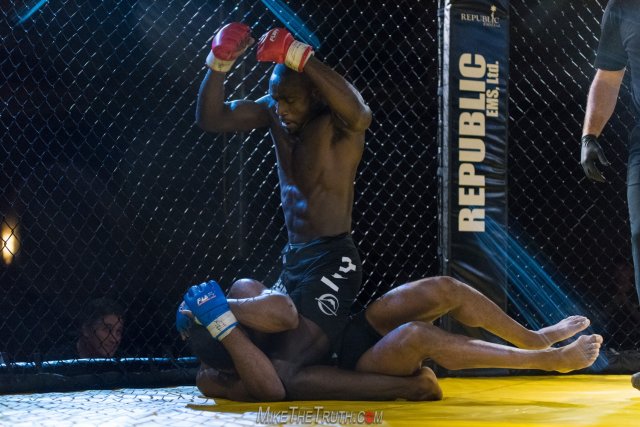 The Fury FC 33 headliner looked close to bring stopped at the end of the first round, as “Aquaman” was applying heavy ground-and-pound to Langellier in the final minute, with referee Jeff Rexroad looking on closely. Langellier survived to hear the final bell, but the second round offered more of the same: Ivy once again grounded “The Slim Reaper,” navigated the lanky grappler’s submission attempts and pounded him with punches and hammerfists from back mount. Rexroad finally intervened at 4:13, giving Ivy (6-2) the TKO win and running his win streak to three straight. Langellier, who appeared to have suffered a leg injury in one of the final exchanges, falls to 8-2.

In the co-main event, Adrian Yanez (9-3) needed barely half a round to blow up Michael Rodriguez in their bantamweight showcase. The fight was a back-and-forth scrap, but Yanez consistently landed the harder and more frequent blows. Rodriguez buckled under a final torrent of punches and referee Kevin Hancock called the fight off at 3:14 of Round 1.

In heavyweight action, Isaac Villanueva pounded out Juan Torres in a brawl that was entertaining while it lasted. The two sluggers gave no quarter, but Rodriguez caught Torres coming in with his chin up, dropped him and followed up with hammerfists as Torres clung to a single-leg. Torres protested briefly after the stoppage, but it goes down as a TKO win for “Hurricane Ike” at 2:59 of the first round.

Nico Echeverry (7-2) authored one of his most emphatic wins to date, stunning Aaron Reeves with a huge left head kick, hopping on Reeves’ back and securing a rear-naked choke for the tap. The end came at 2:37 of the first round, marking a third straight win for the American Combative Systems representative. Fury FC confirmed to Sherdog.com that Echeverry will fight for the vacant lightweight strap later this summer.

In other main card action, Sean Cerveny (4-0) needed only 50 seconds to dispatch Joel Scott (8-9) with an ankle lock in a bantamweight affair; flyweight prospect Jonathan Davis (3-1) took a unanimous decision over the debuting Brandon Pate; and Metro Fight Club exponent Eduardo Anaya (1-0) made a successful pro debut, taking a unanimous decision from Robert Casper (1-5) at bantamweight.

On the all-amateur undercard, Tyson Williams ground-and-pounded Sean Robertson in 2:02 to take the Fury FC amateur middleweight title; Steve Garcia snatched a come-from-behind armbar in Round 4 to take the interim welterweight belt from Mikey Patterson; Keron Reed took a split decision over Diara Culpepper in a bantamweight match; Michael Aswell knocked out Alan Brito with second-round punches; and Madison Wood made a successful debut, defeating Daniel Guevara via unanimous decision in a women’s strawweight affair.