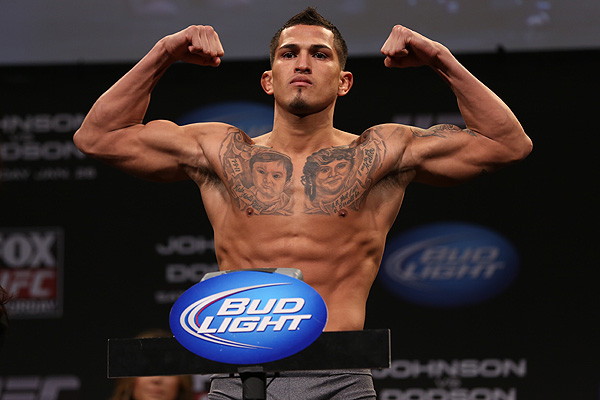 UFC President Dana White recently confirmed the booking to USA Today, also noting that a venue has not yet been selected for the show. No other fights have been announced for the event, which will likely be headlined by the featherweight title tilt.

Pettis, 26, was expected to challenge the winner of Benson Henderson’s April 20 lightweight title defense against Gilbert Melendez, but it appears “Showtime” did not want to wait for that result. Instead, the Roufusport product will make his featherweight debut on the heels of three consecutive victories, most recently stopping fellow top-10 talent Donald Cerrone with a first-round body kick at UFC on Fox 6. The WEC’s final lightweight champion, Pettis has won seven of his last eight fights and owns 13 of his 16 career triumphs by either knockout or submission.

Aldo was last seen defending his featherweight strap against another former lightweight in Frankie Edgar. “Scarface” retained his title in a hard-fought, five-round contest three days ago at UFC 156. That unanimous decision win marked the 15th consecutive victory for Aldo, who has never tasted defeat while competing under the Zuffa umbrella. Widely regarded as a top 5 pound-for-pound talent, Aldo owns notable wins over Urijah Faber, Kenny Florian and Chad Mendes.