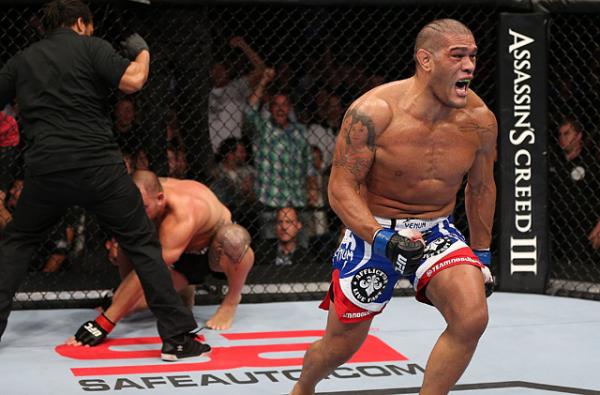 
After consecutive first-round losses, Antonio Silva had become something of an overlooked commodity in the UFC’s heavyweight division.

Labeled underdog fodder against rising heavyweight prospect Travis Browne in the UFC on FX 5 main event on Friday night in Minneappolis, “Bigfoot” showed how dangerous his killer instinct can truly be. Taking advantage of an apparent injury to Browne’s left leg, the massive Brazilian rocked his foe with a big right hand against the fence. The 6-foot-7 Hawaiian toppled to the mat, where Silva (17-4, 1-1 UFC) unloaded with more punches before referee Herb Dean intervened 3:27 into the opening frame.

With that, the man who rose to prominence on the strength of a victory of pound-for-pound legend Fedor Emelianenko in 2011 had achieved his first UFC victory.

“I trained (so) much for this fight. My first [UFC bout] with Cain Velasquez, I lost too fast,” Silva said. “I want to say thanks to everyone at [American Top Team].”

Browne, who suffered his first loss in 15 professional appearances, looked to take advantage of his athleticism in the early moments of the fight, as he showcased footwork and flashy kicks while remaining outside of Silva’s grasp. When the former EliteXC champion attempted to narrow the gap, “Hapa” responded with a knee to the gut.

After the two big men exited the clinch, Browne’s (13-1-1, 4-1-1 UFC) left leg appeared to buckle after he threw a punch, and from there, the Jackson’s MMA product was never the same. With Browne’s movement clearly hampered by the injury, Silva attacked for the finish to earn the 12th knockout victory of his career.


Some six years after his initial meeting with Jay Hieron, Jake Ellenberger finally has his revenge.

Using a more measured approach than he had shown in recent fights, “The Juggernaut” took home a slow-paced, unanimous decision against the Xtreme Couture Mixed Martial Arts member. All three judges scored the welterweight bout 29-28 in favor of Ellenberger. Hieron earned a three-round verdict over the Reign MMA representative at an International Fight League event in 2006.

In recent bouts against Martin Kampmann and Diego Sanchez, Ellenberger (28-6, 7-2 UFC) started quickly but faded down the stretch. Against Hieron, however, the Nebraskan patiently picked his spots throughout. Over the course of their 15 minutes in the Octagon, Ellenberger landed the occasional power punch as well as takedowns in rounds two and three. Meanwhile, Hieron (23-6, 0-3 UFC) was content to throw kicks on the outside, but wasn’t able to land anything especially noteworthy.

Ellenberger did his most visible damage in round two, when he drove Hieron to the floor with a powerful double-leg takedown. He followed up with elbows inside of his opponent’s guard, leaving Hieron cut and bloodied when he returned to his feet after about a minute’s time. The final round didn’t feature any significant change, as Hieron continued to throw kicks while Ellenberger landed the periodic jab.

John Dodson File Photo
Dodson clinched a title shot.
He might compete in the UFC’s smallest weight class, but John Dodson made a huge statement against Jussier da Silva.

The Jackson’s MMA standout staked his claim to the division’s No. 1 contender spot with a second-round TKO of da Silva, a fighter who was once regarded as the world’s best flyweight. The end came 4:35 into the second frame, giving Dodson his third straight victory in the UFC.

Offense came at a premium in the opening frame, as both fighters engaged in a feeling out process in the bout’s initial five minutes. “Formiga,” who entered the contest with four straight submission victories to his credit, was unable to drag the “TUF 14” winner to the canvas.

Dodson (14-5, 3-0 UFC) settled into a rhythm in round two, scoring two knockdowns and outlanding his Brazilian opponent 24 to 3 in significant strikes. The man known as “The Magician” dropped da Silva (14-2, 0-1 UFC) twice with his formidable left hand, and as da Silva lay prone on the floor after the second knockdown, Dodson finished the job with a series of rapid strikes.

With the victory in hand, Dodson took time to reflect on a pending showdown with reigning 125-pound champion Demetrious Johnson.

“It’s gonna be a super-fast fight. Mighty Mouse is gonna be just as fast [as me]. We’re gonna be moving around -- it’s gonna be kind of like lightning. Have this on DVR, and please, rewind it and watch it in slow motion,” he said.

Edwards Chokes Out Neer in 45 Seconds


Justin Edwards delivered on the biggest stage of his mixed martial arts career, and he needed less than a minute to do so.

The Jorge Gurgel protégé brought the fight to Josh Neer in their welterweight contest, forcing the 46-bout veteran against the fence by swinging aggressively. After Neer reversed the position, Edwards jumped guard with an arm-in guillotine. Neer slumped forward as Edwards maintained the hold, and referee Nick Gamst stopped the action 45 seconds in as “The Dentist” went limp. It was Neer’s second straight loss inside of a round in the UFC; he fell to Mike Pyle via first-round knockout at UFC on FX 3 in June.