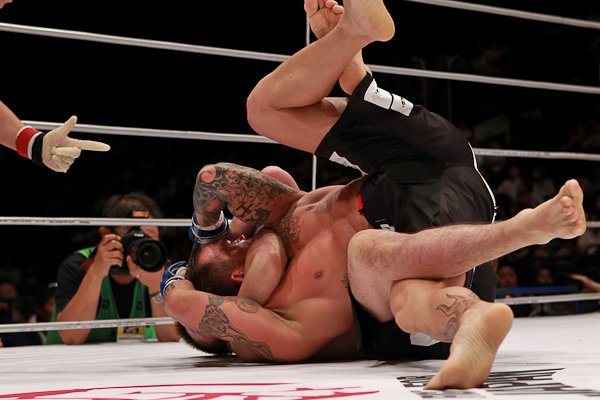 Having spent the previous two months training at Singapore's Evolve MMA, there appeared to be little appreciable difference in the “Tobikan Judan's” already cutthroat grappling style. Aoki had McCullough on the canvas shortly after the opening bell, and he punished the American with punches and open palm strikes to the face, bruising McCullough's nose an ugly ruby color.

“My nose is OK. I looked in the mirror, and it looks a lot worse than it feels. From so many kickboxing matches, it bruises easy and turns colors,” quipped McCullough.

However, a bloody nose was the least of his troubles, as Aoki's overwhelming top pressure eventually saw him take Razor's back to threaten with a face crank from behind. As McCullough moved to pry off the choke, he inadvertently pulled Aoki's arms down onto his neck.

“It was like one of those things where you begin to feel it and then next thing you know you're waking up. It was instinctual, so when I went back to my corner [I realized] there was only three seconds left,” said a resigned McCullough, who tapped at 4:57 of the first round. 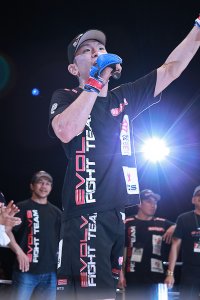 T. Irei
Aoki was outspoken as usual.
For the 28-year-old Aoki, now 29-5 in his MMA tenure, it was his sixth straight win since his deflating April 2010 defeat to Strikeforce champion Gilbert Melendez. Interestingly, Aoki's last three wins, including victories over Lyle Beerbohm and Rich Clementi, have all come by way of neck crank.

“I was able to explode what I'd stored up in me over the last two months,” said Aoki. “I have nothing to say, however. I think everything that happened was within the realm of expectation.”

Aoki's usual brusque, curt style of answering questions was on display with the press, as well, as he admonished the media for not “understanding” his positional grappling skills and not asking “appropriate” questions. Not surprisingly, he did not equivocate about his current MMA goal.

“I want to focus on strengthening Asia because there are a lot of good Asian fighters out there. Places like Malaysia, Singapore, not just South Korea, all have great fighters and could one day exceed Japan,” Aoki explained.

“Right now, the top teams are like [American Kickboxing Academy] and Greg Jackson's, but I'd like to make the top team in Asia. That's what I'm aiming at.”

The bout was a rematch of their initial 2006 Shooto meeting in which the Norwegian was disqualified in just eight seconds for an errant kick to Kawajiri's groin. 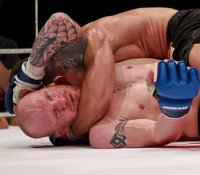 T. Irei
Kawajiri's top game was Hansen's
hell.
Though both men hit each other with big punches and kicks to the body on the feet, Hansen surprised Kawajiri on the canvas, defending against the kimura with reversals into the rear waist lock, as he secured back control the close out the round.

From there, however, Kawajiri's mashing-style of top control took over. As Hansen later admitted, it was Kawajiri's punishing style that wore him down and opened him up for the finish, as Kawajiri locked up an arm-triangle choke in the third frame, tapping out the tough Norseman at the 2:30 mark.

“In training, I went to [Nippon Top Team] and I sparred with [Masakazu] Imanari, who is similar to Joachim on the ground, so maybe that's why I was able to win with the arm-triangle,” Kawajiri revealed after the win.

“I asked Aoki how to finish with one, and they both taught me how.”

The 33-year-old Kawajiri improves to 29-7-2 in his career, now with a new direction at 145 pounds. Meanwhile, the loss snaps "Hellboy's" three-fight winning streak.

“I don't think I'm really at my best at featherweight yet, so I want to keep fighting here to just get used to it," added Kawajiri. "I think it's going to be really fun if I knock the other featherweights out one by one, won't it?” 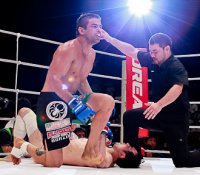 T. Irei
Cabral joined the side choke festivities.
The fan favorite grappler puzzled onlookers with his opening round tactics, as he indulged his younger opponent on the feet, almost paying for it after eating a stiff Cabral left hook that had him wobbled.

The fight would not stay up for long, however, as Cabral took the fight down in the second period, locking on the arm triangle as “the IQ Wrestler” tried to pull him back into full guard. Though Sakuraba tried to pry off his opponent's arms, his hand soon thudded on the canvas, prompting referee Moritaka Oshiro to dive for the save, moments before Sakuraba passed out at the 2:42 mark.

It was the fourth straight loss for the 42-year-old Sakuraba and the third stoppage loss in a row in his illustrious career.

Former Shooto world champion “Lion" Takeshi Inoue put away popular Japanese veteran Caol Uno in the first round of their featherweight bout -- and with a major exclamation point.

Inoue had Uno in trouble early in the round with three rapid-fire right hands from the collar tie that sent Uno down, but he could not finish with following punches. That came a few moments later, however, as “Lion” feinted and shuffle-stepped his way into hiding a vicious high kick and a straight right that connected squarely on Uno's chin.

Seeing a dazed Uno fall straight backward, his head bouncing on the canvas, Inoue restrained himself from following up with academic punches, as referee Yuji Shimada dove for the save at the 4:18 mark. 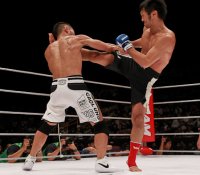 T. Irei
'Lion's' roar was in his shin.
The win was the third straight stoppage for Inoue, while Uno is 1-5-1 in his last seven bouts.

UFC veteran Gerald Harris took a decision win over Kazuhiro Nakamura in their middleweight contest, using stifling pressure in the clinch to sway two of the three judges in his favor. The powerful American was dogged in his takedown attempts, giving Nakamura no space to breathe or maneuver.

So neutralized was the Yoshida Dojo product that he uncharacteristically and blatantly grabbed the ropes in the final moments of the bout to prevent himself from being slammed by “Hurricane.” Harris nonetheless got the slam, and Nakamura also earned himself uncharacteristic boos from his hometown crowd shortly after.

For his dominant control, judges Matt Hume and Gen Isono naturally saw the bout for Harris, with only judge, Hikaru Adachi, curiously siding with Nakamura.

Outside of a round-two guillotine attempt, the former SRC champion was not able to threaten “Chiquerim” with many submissions. However, his constant takedown pressure and Freire's third-round yellow card for passivity swayed judges Akira Shoji and Gen Isono in his favor. Only judge Matt Hume sided with the Brazilian.

In the Dream 17 opening bout, Ikuhisa Minowa slayed yet another giant in Mongolia's Baru Harn, putting the hefty albeit unskilled heavyweight down on the canvas to finish him with a scarf hold armlock at 4:29 of the first period.